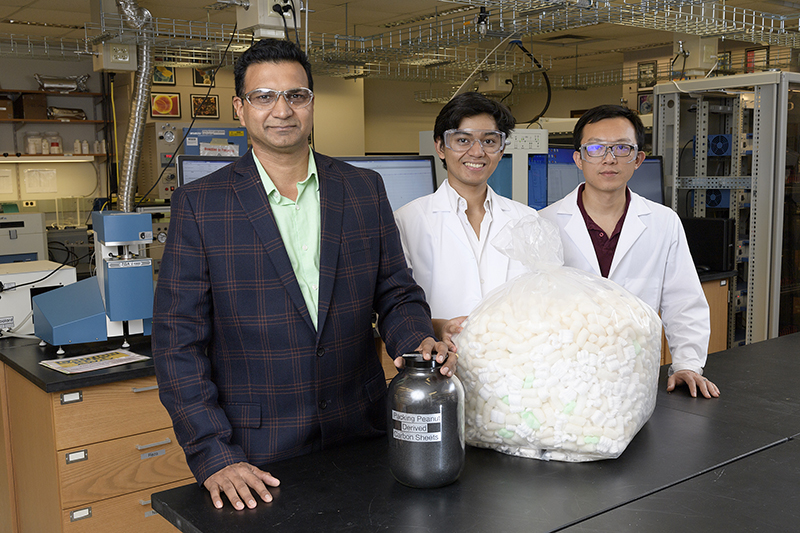 Purdue University’s Vilas Pol, an associate professor in the School of Chemical Engineering and the School of Materials Engineering, led a team that is a finalist for the 2016 R&D 100 award. From left are Pol and doctoral students Arthur Dysart and Jialiang Tang. Also a member of the team was postdoctoral associate Vinodkumar Etacheri as well as Ki Bong Lee and Seok-Min Hong, researchers from Korea University. (Purdue University photo by John Underwood) Download image

WEST LAFAYETTE, Ind. – A Purdue University researcher led a team that is a finalist for  the 2016 R&D 100 award, which has been called the "Oscars of invention."

The team has developed a process to convert trashed packing peanuts into carbon for battery electrodes and also for a technology to capture carbon dioxide from the atmosphere to reduce climate change. The carbon nanoparticles and “microsheets” are produced at low cost from polystyrene and starch-based packing peanuts, respectively, said Vilas G. Pol, an associate professor in the School of Chemical Engineering and the School of Materials Engineering.

“Our approach, which we call UpCarbon, yields new forms of carbon that show promise in addressing the growing issue of plastic and non-degradable waste,” said Pol, who led the team working with postdoctoral associate Vinodkumar Etacheri, doctoral students Arthur Dysart and Jialiang Tang. (The preparation of carbon sheets for UpCarbon was highlighted by the American Chemical Society in a video available at https://www.youtube.com/watch?v=8UCti2CL2io)

An industrial co-developer of the UpCarbon materials technology is SureCarbon Holdings Inc., in Kingsport, Tenn. It is working on “scalability” of the process, which involves heating the peanuts between 500 and 900 degrees Celsius in an industrial furnace. In a collaboration with Ki Bong Lee and Seok-Min Hong, researchers from Korea University, the carbon microsheets derived from starch packing peanuts were evaluated as carbon dioxide adsorbents.

“International and multidisciplinary research has concluded that the global warming phenomenon is largely the result of significant carbon dioxide emissions, particularly from fossil fuels,” Pol said. “The field of carbon dioxide capture and sequestration offers a potential technology solution.”

Of the 2.3 million tons of plastic products produced annually, more than 43 percent is disposed as trash or landfill waste.

“Unfortunately, plastics remain in landfills for at least 100 years due to their strong chemical resistance,” Pol said. “As plastics are continually discarded, this results in expansion of landfills, reduction of fertile and usable land, and cultivation of habitats for disease-carrying pests. Recycling initiatives are unable to match the pace of waste generation, as recycling only accounts for less than 12 percent of waste treatment and only applies to certain plastics.”

Pol also led a team that won the 2015 R&D 100 award for developing a process to manufacture “carbon microspheres” from waste plastics.

This year’s R&D 100 Winners will be announced during an awards dinner on Nov. 3 at the Gaylord National Resort & Convention Center, in Oxon Hill, Md.

Note to Journalists: A YouTube video from the American Chemical Society is available at https://www.youtube.com/watch?v=8UCti2CL2io