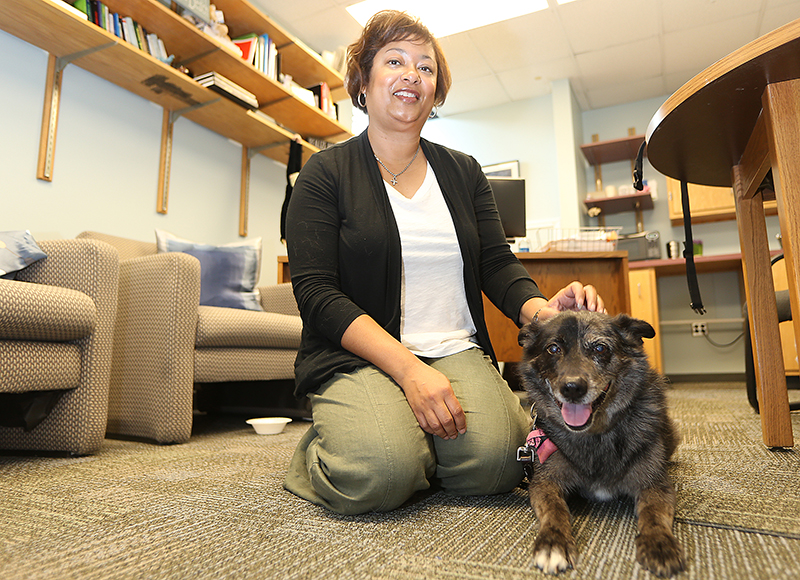 Note to online editors: A link to a video clip of Candace Croney explaining the need for new, more rigorous standards for commercial dog breeders is at the bottom of this news release. The video can be embedded in your website.

WEST LAFAYETTE, Ind. - Candace Croney, director of Purdue University's Center for Animal Welfare Science, was motivated to lead research that resulted in new, higher standards for the treatment of commercially bred dogs not just because she is a scientist.

She is a dog owner and wants the best for her pet as well as all dogs.

Croney knows that federally mandated minimum standards breeders must meet are just that - the minimum.

"My guiding question has been is minimum standard good enough? Do we really want that?" Croney said. "Dogs deserve better than that. We can raise the bar. I would think all dog owners want that. The public wants it, too."

The research by Croney and others at the Center for Animal Welfare Science over the past three years resulted in a new national certification program that sets rigorous standards for the care of dogs and puppies by professional breeders. Canine Care Certified was announced Tuesday (Aug. 2) in Las Vegas during a national conference of the pet care industry.

The voluntary program has been pilot-tested with 16 professional breeders since early 2015. Croney said every breeder in the pilot has shown improvement in the care of their dogs.

Croney said no other program sets standards as comprehensive as those provided by Canine Care Certified. The program exceeds other canine welfare programs and state and federal laws that often provide only a minimum level of standards and do not fully address areas such as dogs' behavioral needs, such as socialization.

Also, breeders seeking certification under Canine Care Certified must meet the criteria and pass a third-party audit of their operation. Other voluntary programs do not have substantive measurement and evaluation provisions.

Further, the Canine Care Certified program is available to any breeder, regardless of size, that commits to meeting the standards, potentially expanding the program's scope. U.S. Department of Agriculture licensing only applies to breeders with a certain number of dogs.

Croney said the program also can be adapted by research kennels and shelters like the one where she got her dog.

The standards are based on the work of Purdue researchers from many areas. For instance, Nicole Olynk Widmar, an associate professor of agricultural economics, researched the social concerns consumers have about the treatment and welfare of dogs.

"The multidisciplinary expertise we have at Purdue is where the benefits of the research show up," Croney said. "The science involved in this certification program went beyond the basic treatment of dogs and the effects on their physical and behavioral well-being. It also took in the social sciences, including ethics. It's not only an animal-friendly program; it's also people-friendly."

Croney likes that the research and certification program align with the three land-grant university missions of education, research and engagement with the public. The science-based program educates interested breeders and the public about best practices for the care and welfare of dogs and improves transparency about their treatment.

"People often ask if we can do better for our dogs," Croney said. "The answer is yes, we can. This program accomplishes that."

Details of the certification program are available at http://caninecarecertified.org/newsrelease80216/

More information about the Center for Animal Welfare Science is at http://vet.purdue.edu/CAWS/