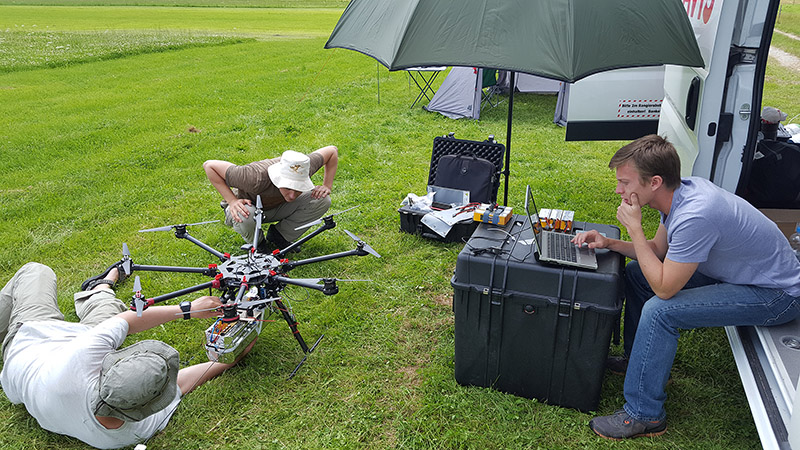 WEST LAFAYETTE, Ind. - A Purdue University agronomy professor and an aeronautical engineering technology student joined an international team of researchers in Germany this summer to explore a new use for unmanned aerial vehicles - known as UAVs or drones - in meteorological research.

The project, funded by the Purdue Climate Change Research Center, is one of the first to use UAVs to explore the nocturnal boundary layer, a stable atmospheric layer that forms during nighttime hours when the ground is cooler than the air. While daytime airflow is mostly predictable and measurable, nighttime airflow is poorly understood and difficult to measure, said Richard Grant, professor of agronomy at Purdue.

"Air essentially sloshes around at night," he said. "The movements are much slower than in the daytime. Things are much more stable at night and therefore harder to predict."

Grant's team collaborated with researchers from the Max Planck Institute of Biogeochemistry and the Karlsruhe Institute of Technology to track the flow of carbon dioxide and methane gas through the atmosphere with the goal of measuring how air flows throughout the layer. Traditionally, soil-emitted gases have been measured in closed chambers placed over the soil or on towers so the teams' use of UAVs is a significant development.

"One of our goals is to see if UAV measurements are a viable way to measure and track these gases," Grant said. He said that being able to measure soil emissions at night as well as during the day is important to understanding the full impact of agricultural practices, such as chemical application, on the environment.

During the planning stages of the project, Grant emailed colleagues at Purdue's School of Aviation and Transportation Technology to describe the project and request their input. Evan Flatt, an incoming senior in aeronautical engineering technology, responded with his recommendations for a vehicle that would meet Grant's needs. Flatt customized an octocopter-style UAV – a vehicle with eight rotors to provide lift and forward motion – to carry gas sensors. He also programmed the researchers' flight plans into the control software and collaborated with other team members to make sure everyone stayed safe.

Under the supervision of Flatt and other team members, the Purdue UAV and others provided by the international research teams made 12-minute flights each hour, using a variety of flight plans designed to minimize disruption of the atmosphere by the vehicle rotors.

"It was a pretty amazing experience for an undergrad," Flatt said. "Everyone on the trip had different needs and goals for the project. I wanted to fly safely and the researchers needed to get their data points close together. Some needed one type of data and some needed another, so you had to compromise. It was a great trip and I was excited to be involved in such a novel approach to the research."

Flatt said he hopes to continue his work with UAVs after graduation.