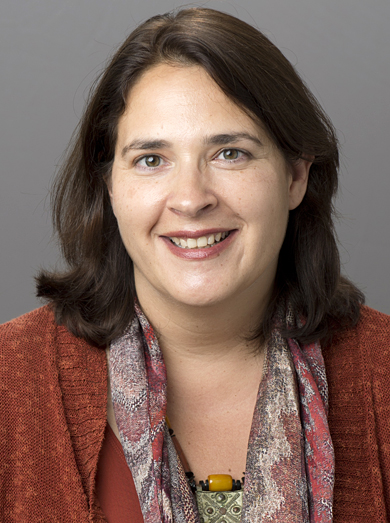 WEST LAFAYETTE, Ind. — Among the Central African Republic forager communities, it is older women who suffer the most from the region's ongoing food shortage, according to an anthropologist from Purdue University.

"Public health efforts usually focus on young children and their mothers, but we can't forget older women who are critical to supporting these families," said Melissa Remis, a professor of anthropology who studies forager communities, human-wildlife interaction, conservation and gorillas in the Central African Republic. "These older women are the most vulnerable to the region's recent economic transitions and food insecurity issues and, yet, they bear the brunt of the most stress on their health in terms of having to take care of children and grandchildren under impoverished conditions."

The findings are published in the American Journal of Human Biology, and the article is featured on the journal's July/August cover. The project, funded by Purdue's Clifford B. Kinley Trust and the College of Liberal Arts, is co-authored by Carolyn A. Jost Robinson, who at the time was a Purdue postdoctorate. She is now an assistant professor of biological anthropology at University of North Carolina Wilmington.

The 2012 data from 60 women were collected from June to August, a time called the honey season because it is the region's most fruitful period. Exact ages are unknown, but the 17 older women who participated in the study were estimated to be age 41 years or older. The other age ranges included 18 to 30 and 31 to 40. Compared to these younger women, Remis found the older women have the highest levels of chronic malnutrition and lowest hemoglobin levels among the foragers in the BaAka community. Seventy percent of the older women had very low hemoglobin levels, a percentage that would be considered a public health crisis by international health agencies. Hemoglobin levels indicate iron levels and are often to used assess short-term nutritional status. As part of the study, the women participated in a 24-hour recall of what they had consumed. Only 25 percent reported eating any meat, which historically was a diet staple, and many of them had only had one meal in 24 hours. Some had not eaten at all.

The Central African Republic has the highest level of hunger in the world, according to the 2015 Global Hunger Index by the International Food Policy Research Institute. Although the Central African Republic has historically been self sufficient for food, in 2012 the country was experiencing chronic food insecurity, civil unrest and conflict. The BaAka living in this region were historically hunters and gatherers, but local logging and conservation efforts contributed to an influx of immigrants and now the BaAka are shifting to an agricultural and market system.

Remis studies the BaAka community in the Mossapoula and Yandoumbe villages, which are adjacent to the protected Dzanga-Sangha Dense Forest Reserve. The reserve is known for western lowland gorillas and elephants, and it was established as a protected area in 1990 by the Central African Republic government and World Wildlife Fund. These park areas are zoned for conservation, and many BaAka can no longer legally hunt or forage for forest foods, such as yams in their traditional hunting territories. Some forest areas were set aside for the BaAka to hunt and forage, but these areas have been over-harvested following an influx of migrants and an influx of arms from regional conflict.

The women from Mossapoula were the most unhealthy as they had farther to walk - about five miles – to the fields for daily work and less access to legal areas to forage for foods in the forest.

"For animal conservation to be successful you have to think about how conservation efforts can affect the communities who depend on wild resources," Remis said. "If we can show that food security and health are critically dependent on the preservation of the forest and wildlife, that is an effective message for policymakers, governmental leaders and international organizations as they move forward with conservation."

Remis' previous research found that the BaAka population has been experiencing health declines since 1968 as a result of the changing market economy and access to natural resources. When Remis, who has conducted fieldwork in this area for 28 years, is on site, she stays in a house at the village's edge. Over the years she noticed the older women walking by her house to the fields. She heard their stories and observed how the physical labor was taking a toll on their health.

"They are hunter-gatherers but are now participating in this hard labor and, yet, only coming back with tiny amounts of starchy manioc that they are given in exchange for their work in the fields," Remis said. "We'd visit and I'd hear about the many mouths they were going home to feed and the lack of meat and other protein sources. Often, everyone got just a single meal of manioc and forest leaves a day."

Remis is affiliated with Purdue's Center for the Environment and is an associate dean for research and graduate education in the College of Liberal Arts.

Note to Journalists: Journalists interested in a copy of the American Journal of Human Biology article can contact Amy Patterson Neubert, Purdue News Service, at 765-494-9723, apatterson@purdue.edu.

Objectives: Using ethnographic interviews and biological measures, this article investigates changing health and nutrition of a hunter-gatherer population transitioning from a forest-based subsistence system to a horticultural and market-driven lifestyle.

Results: BMI was similar across all three age classes in YDBE, but differed amongst women of MS (ANOVA; F = 6.34, df  = 30, P = 0.005). Values were lowest among the older women in older age class 3 who also had the greatest number of dependents. Overall SS values were significantly negatively correlated with the number of biological children (r = -0.33, P = 0.01) in both villages.

Conclusions: Here, we identify older BaAka women, caring for their own children and grandchildren, as particularly vulnerable to economic changes and food insecurity. We found older women, especially those in a community with greater restrictions on access to forest resources to have more dependents, reduced market integration, and low BMI relative to younger women in the population.