NSF grant to help archaeologist with drone fieldwork in Armenia 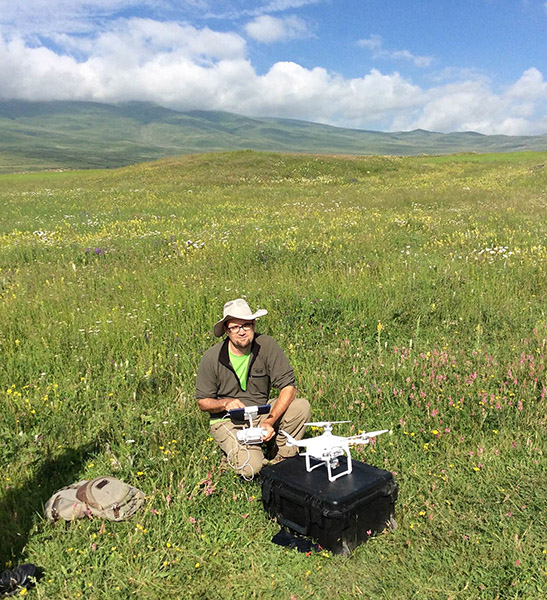 Ian Lindsay, an associate professor of anthropology at Purdue University, is studying how communities formed and thrived more than 3,000 years ago in the upper Kasakh River Valley in Northwest Armenia. (Photo provided by ArGATS) Download image

WEST LAFAYETTE, Ind. — A Purdue University archaeologist is studying how communities formed and thrived more than 3,000 years ago in northwestern Armenia, thanks to a grant from the National Science Foundation.

Ian Lindsay, an associate professor of anthropology, received $221,173 from the National Science Foundation for two years of fieldwork. He is looking at warfare, settlement patterns and political development in the Bronze Age and Iron Ages, which spanned from 1500 to 200 BCE.

He is excavating and studying cemeteries and fortresses - stone hillforts - in the upper Kasakh River Valley to better understand this society that, while mobile in caring for livestock herds, returned to the fortresses seasonally.

"We think the way these fortresses are used over a thousand-year period, from the second millennium to the first, really changed," said Lindsay, who has been excavating in the South Caucasus since 2000. "We want to understand how these structures were used politically, religiously and socially; we also want to know about the lifestyle of people who lived in the shadow of these forts."

The fortresses, which were built with extremely large stone boulders, overlooked plains and valleys. All that remains are foundations, so archaeologists do not know how tall the fortresses were.

Lindsay and his collaborators from Cornell University, the University of Illinois-Urbana Champaign, and New York University, conducted survey and excavations in Armenia this past summer and will return in summer 2017. By using traditional excavation, along with a tablet-based mobile GIS (geographic information system) data collection system and aerial site survey via drones, the researchers can view a larger perspective of their research area. For example, the aerial view provides a wide scope of the Kasakh Valley landscape, while the spatial technology also makes it possible to look closely at individual burial sites.

Lindsay is co-director of Project ArGATS, Archaeology and Geography of Ancient Transcaucasian Societies, that focuses on the history of the area while preserving modern Armenia's diverse cultural heritage.

He also is president of the American Research Institute of the South Caucasus. He is collaborating with colleagues from Armenia as well as Alan Greene from New York University, Maureen Marshall from the University of Illinois-Urbana Champaign, and Lori Khatchadourian and Adam T. Smith, from Cornell University.