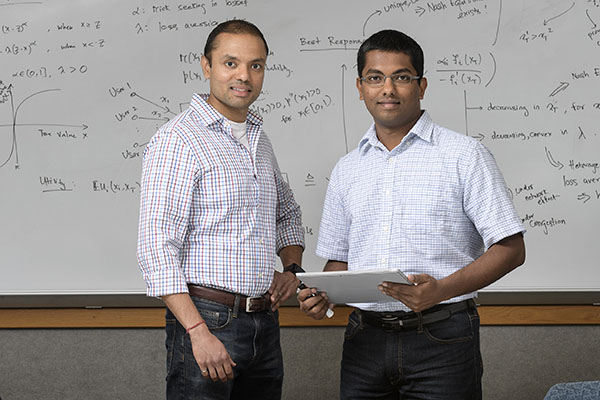 WEST LAFAYETTE, Ind. – New research in game theory shows that people are naturally predisposed to over-use “common-pool resources” such as transportation systems and fisheries even if it risks failure of the system, to the detriment of society as a whole.

The ongoing research harnesses the Nash equilibrium, developed by Nobel laureate John Nash, whose life was chronicled in the film “A Beautiful Mind,” and also applies “prospect theory,” which describes how people make decisions when there is uncertainty and risk.

The research could have implications for the management of engineered systems such as the power grid, communications systems, distribution systems, and online file sharing systems, along with natural systems such as fisheries.

“We are surrounded by large-scale complex systems, and as engineers we are trying to figure out how to design systems to be more robust and secure,” said Shreyas Sundaram, an assistant professor in Purdue University’s School of Electrical and Computer Engineering. “One aspect would be how you could engineer systems so that the incentives for people to use them are aligned with perhaps what’s best for society. As a government, what sorts of things can you do to make sure people use systems in a responsible manner?”

Doctoral student Ashish Hota is leading the research, which is the focus of his thesis.

“The main theoretical framework we are using is the language of game theory, which concerns the analysis of decision making by multiple individuals when the benefits of their decisions depend on what other people are doing,” Sundaram said.  “At a Nash equilibrium, people selfishly select options that will yield the highest benefit for them, often to the detriment of their collective benefit.”

Findings are detailed in a research paper that appeared in the July issue of the game-theory journal Games and Economic Behavior, and is available at http://www.sciencedirect.com/science/article/pii/S0899825616300458.

An example of a Nash equilibrium is illustrated in the so-called “prisoner’s dilemma,” where two robbers are caught by police and questioned independently. They would both benefit by agreeing ahead of time not to squeal on each other.

“The problem with this rational thinking is that if I know you are not going to rat me out, I stand to benefit more by ratting you out and optimizing my chances of getting away with it,” Sundaram said. “So the only Nash equilibrium is for both of you to rat each other out. If your accomplice is ratting you out there is no benefit in you not ratting him out because you are going to take more of the blame for the crime.”

Understanding the behavior at the Nash equilibrium can be challenging when the outcomes are uncertain. Complicating matters is that different people have different risk preferences.

Sundaram and Hota have analyzed the Nash equilibrium when risk preferences are modeled according to prospect theory, a Nobel-prize winning theory that captures how humans make decisions in uncertain situations.

“The key is that you have to consider how people actually perceive wins and losses, and this is where prospect theory comes in,” Sundaram said. “Whereas classical models have not looked at how people actually evaluate gains and losses and probabilities, Ashish’s work has been looking at what happens at the Nash equilibrium when we incorporate these more complex risk preferences. We wanted to determine the failure probability, which we refer to as the fragility of the resource, as a function of the risk preferences of the users.”

In a society that tightly controls the use of resources, failure is less likely.

“This is why the notion of a Nash equilibrium ends up being key,” he said. “The Nash equilibrium captures the idea that nobody is forcing you to do the right thing. You are doing just what you want to do to optimize your own benefit. If, however, it’s a resource that is very carefully managed by a central authority, the failure probability is lower.”

The researchers found that the resource has a higher likelihood of failure at the Nash equilibrium under prospect theory.

“This means human beings will over-utilize their resources, compared to what is predicted by classical models of decision making,” Sundaram said.

Furthermore, people have differing, or heterogeneous, aversions to losing. In free societies, where people can exercise decisions based on their differing loss aversion, total use of a common resource is higher than otherwise.

The researchers also are studying how imposing taxes to incentivize human behavior impacts its likelihood of failure.

Future work will include research to apply the approach to cybersecurity, probing how people make decisions under risk.

The paper was authored by Hota; Siddharth Garg, an assistant professor of electrical and computer engineering at New York University; and Sundaram.

Fragility of the commons under prospect-theoretic risk attitudes

Ashish R. Hota a, Siddharth Garg b, Shreyas Sundaram a,*

a School of Electrical and Computer Engineering, Purdue University, West Lafayette, IN 47907