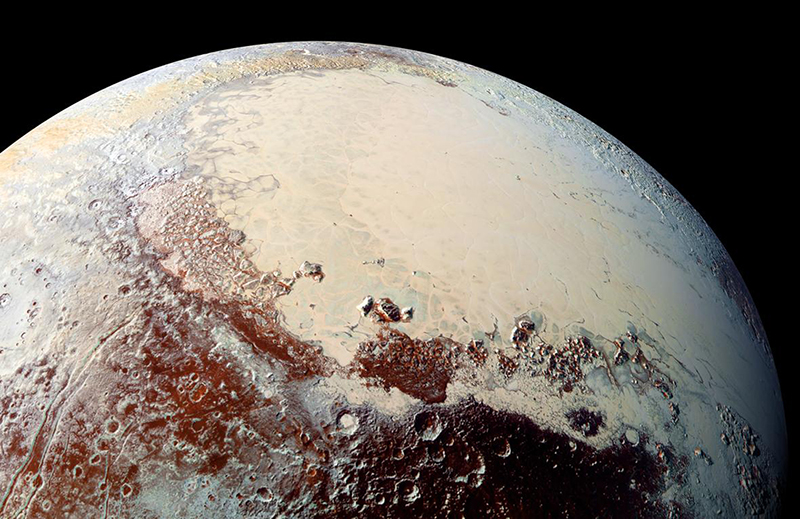 WEST LAFAYETTE, Ind. — On Pluto, icebergs floating in a sea of nitrogen ice are key to a possible explanation of the quilted appearance of the Sputnik Planum region of the dwarf planet's surface.

Data reported by NASA's New Horizons New Horizons mission to the Pluto system shows unusual terrain in this region, which features a large deposit of nitrogen ice with a pattern of polygons that are thickest at their centers and dip at their edges. Purdue University researchers have proposed that the polygons seen in the images could be individual Rayleigh–Bénard convection cells. A paper detailing the work will be published in the journal Nature online on Thursday (June 2).

Purdue graduate student Alex Trowbridge, under the guidance of Jay Melosh, a distinguished professor of earth, atmospheric and planetary sciences, and professor of physics and aerospace engineering, led the research.

"Evidence suggests this could be a roiling sea of volatile nitrogen ice," Melosh said. "Imagine oatmeal boiling on the stove; it doesn't produce one bubble for the entire pot as the heated oatmeal rises to the surface and the cooler oatmeal is pushed down into the depths, this happens in small sections across the pot, creating a quilted pattern on the surface similar to what we see on Pluto. Of course, on Pluto this is not a fast process; the overturn within each unit happens at a rate of maybe 2 centimeters per year." 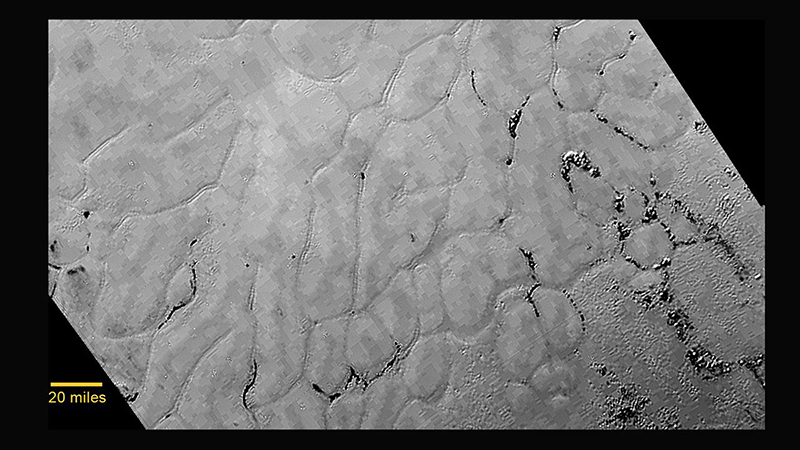 The surface of Pluto appears to be primarily very cold water ice. However, within the Sputnik Planum region the icy surface drops into a basin that holds a pool of nitrogen ice. Both water and nitrogen are solids at Pluto's temperatures, but the nitrogen ice is structurally weak and has a low viscosity that allows it to deform and flow like a fluid, while the water ice has a very high viscosity and can form tall, hard mountains, Trowbridge said.

"Within this pool of nitrogen ice, there are mountains of water ice that have collected at the edges of the polygons," he said. "The way they have collected suggests they have moved or floated like icebergs with the convection current. If this is true, we can calculate how deep the pool would need to be for the icebergs to float freely without catching on the bottom."

The polygons also can provide information about the depth of the pool of nitrogen through known ratios of width to depth for individual cells of convection, he said.

Data show the polygons are 20 to 30 kilometers in diameter. Only the tips of the water icebergs can be seen, and the team performed calculations as if they were spheres, a regular shape that requires the shallowest volume of liquid to float, to create conservative depth estimates, Trowbridge said.

The spectroscopic data from the New Horizons mission only provides information about a surface layer not thicker than a sheet of paper. However, convection would also explain how the surface of this area of Pluto is so young, Melosh said.

Overturn from convection would erase impact craters and renew this section of the dwarf planet's surface, which fits with the data New Horizons provided. From this data the surface of Pluto's Sputnik Planum is estimated to be less than 10 million years old, which is considered very young and suggests significant activity on the surface. However, the Purdue team's convection model suggests that the age of the surface of the nitrogen ice fields of the Sputnik Planum region is even younger, around one million years old, he said.

"Many people expected Pluto to be a cold, dead world," Melosh said. "What we've discovered through this mission is that cold worlds like Pluto have a different kind of activity that involves materials we think of as gases. This understanding offers a new perspective that cold worlds can be just as active and interesting as our own."

In addition to Trowbridge and Melosh, the research team includes Jordan Steckloff, who was a graduate student at Purdue the time of the research, and Andy Freed, a Purdue professor of earth, atmospheric and planetary sciences.

The team computed the Rayleigh number for the nitrogen ice layer, a mathematical term associated with the level of buoyancy-driven flow, or convection, and found it to be more than 10,000 times greater than the critical value needed for the onset of convection. This means convection could easily occur, even at the extremely low temperatures of Pluto, which average more than 300 degrees Fahrenheit below zero.

A team led by William McKinnon, deputy lead of the New Horizons Geology, Geophysics and Imaging team, also concluded convection is the most viable explanation for the polygons. A paper detailing their work is published in the same issue of Nature.

"Pluto has surprised us, but you never know what you will see until you get there," said Steckloff, who performed analysis of the annual thermal changes on Pluto and evaluated alternative explanations for the polygon terrain. "This underscores the importance of these missions, which provide rich data, but also reveal new questions and how much we don't know. We look forward to the complete analysis of the surface composition and how it affects our model. However, definitive confirmation of our model would require another mission to probe below the surface."

The Fredrick N. Andrews Fellowship and a NASA geology and geophysics grant funded the research.

Pluto’s surface is surprisingly young and geologically active. One of Pluto's youngest terrains is the equatorial region, informally named Sputnik Planum, which is a topographic basin filled by N2 ice mixed with minor amounts of CH4 and CO ices. Nearly the entire surface of the region is divided into irregular polygons ~20-30 km in diameter, whose centers rise tens of meters above their sides. The edges of this region exhibit bulk flow features without polygons. While both thermal contraction and convection have been proposed to explain this terrain, polygons formed from thermal contraction (analogous to ice-wedges or mud-crack networks) of N2 are inconsistent with observations of non- brittle deformation within the N2 ice sheet. Here we employ a parameterized convection model to compute the Rayleigh number of the N2 ice and show that it is vigorously convecting, making Rayleigh-Bénard convection the most viable explanation for these polygons. The diameter of Sputnik Planum's polygons and dimensions of its "floating mountains" of water ice suggest that its N2 ice is ~10 km thick. The estimated convection velocity of 1.5 cm/year indicates a surface age of only ~1 Myr. The surprising presence of active convection on Pluto’s surface indicates that even very cold (dwarf) planets far from the Sun may possess geologically active surfaces.

An ammonia-water slurry may swirl below Pluto's icy surface