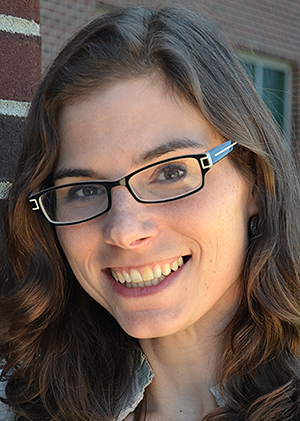 WEST LAFAYETTE, Ind. - Purdue University announced today (May 26) that it is a Grand Challenges Explorations winner, an initiative funded by the Bill & Melinda Gates Foundation.

Jackie Linnes, an assistant professor in the Weldon School of Biomedical Engineering, will pursue an innovative global health research project aimed at developing a low-cost technology similar to a pregnancy test for detecting HIV infection.

To receive funding, her team was one of 43 Grand Challenges Explorations winners in the latest round who demonstrated potentially groundbreaking concepts in one of five critical global heath and development topic areas.

The Purdue project is for a technology that would use a system of channels and valves made of wax and printed on sheets of paper to automatically perform the multi-step reactions required for HIV detection.

"By using paper and printing techniques, we plan to detect HIV from finger-prick blood samples for less than $2 per test," she said.

The new concept works by filtering virus particles with membranes and channeling them to portions of a paper sheet containing chemical reagents. Heat is applied to perform "thermal lysis," or breaking apart the virus particles to release DNA strands. Then the chemical reagents amplify, or make copies of the viral DNA for detection using a technique called RT-LAMP, before moving on to additional steps for pregnancy test-like detection.

Her research group is leading the project, working with George Chiu, a professor of mechanical engineering, electrical and computer engineering and psychological sciences.

Alternatives are needed because current portable, rapid diagnostic tests for HIV do not detect the virus if infection were recent and also do not indicate the extent of infection or whether medications are working properly. Such detailed results require laboratory analysis, and it can take a week or more for patients to receive the results.

The new approach being pursued by the Purdue researchers represents a practical in-home testing method that also could be important for poor regions of the world including portions of Sub-Saharan Africa lacking ready access to medical facilities.

The Gates Foundation grant will provide $100,000 of funding over 18 months.

Linnes received initial funding through a seed grant from Purdue's Innovation for International Development (I2D) Lab. The lab's mission is to alleviate issues including extreme poverty, hunger, epidemics and the lack of safe water, sanitation and energy production.

The Gates Foundation will be accepting applications for the next GCE round in September.

Grand Challenges Explorations is a $100 million initiative funded by the Bill & Melinda Gates Foundation. Launched in 2008, more than 1,186 projects in more than 61 countries have received Grand Challenges Explorations grants. The grant program is open to anyone from any discipline and from any organization. The initiative uses an agile, accelerated grant-making process with short two-page online applications and no preliminary data required. Initial grants of $100,000 are awarded two times a year. Successful projects have the opportunity to receive a follow-on grant of up to $1 million.

Note to Journalists: Jackie Linnes is currently on maternity leave and can be reached by email at jlinnes@purdue.edu. A video of Linnes talking about her research is available at https://drive.google.com/folderview?id=0B5pvN1C9I3pbMnZLY21oRmF2YW8&usp=sharing