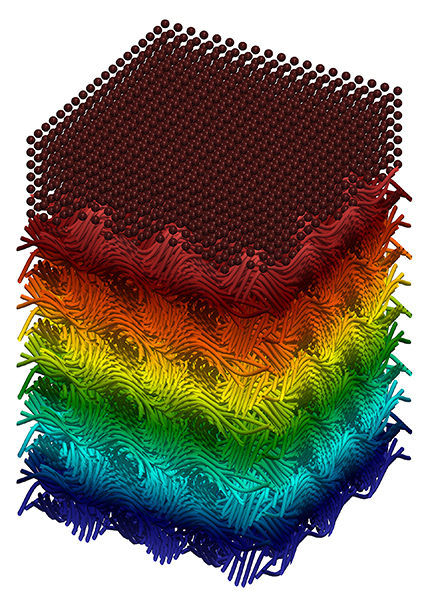 New research findings revealing the structure of a sea creature's impact-resistant "dactyl club" are inspiring development of advanced materials for possible applications in body armor, helmets and components for buildings and cars. The club is made of a composite material containing fibers arranged in a helicoidal structure that resembles a spiral staircase. New findings have revealed that the fibers also are arranged in a herringbone pattern in the appendage's outer layer. (Purdue University image/ Nicolás Guarín-Zapata, Pablo D. Zavattieri) Download image

The "dactyl club" can reach an acceleration of 10,000 g, unleashing a barrage of ferocious impacts with the speed of a .22 caliber bullet. The club is made of a composite material containing fibers of chitin, the same substance found in many marine crustacean shells and insect exoskeletons but arranged in a helicoidal structure that resembles a spiral staircase. Previous research has shown this spiral architecture is naturally designed to survive the repeated high-velocity blows

In new findings, researchers from the University of California, Riverside and Purdue University have revealed that the fibers also are arranged in a herringbone pattern in the appendage's outer layer.

The researchers used an optical microscope to discover the herringbone-like pattern in a cross section of the impact region, located in the outer-most layer of the dactyl club. However, further examination using more powerful microscopes revealed a "sinusoidally-architectured helicoidal composite," said Pablo Zavattieri, an associate professor in Purdue's Lyles School of Civil Engineering.

"We haven't seen this design in other species, so this is completely new," he said.

Findings appearing this week in the journal Advanced Materials describe for the first time this possibly unique herringbone structure. The work was performed in collaboration with David Kisailus, the Winston Chung Endowed Professor in Energy Innovation at UC Riverside, and the paper's lead author is UC Riverside graduate student Nicholas A. Yaraghi.

"By using 3-D printing techniques like those used by Zavattieri's team, we can actually take what we've learned about the architecture of the dactyl club and manufacture new composites with traditional engineering materials like polymers and carbon fiber," Kisailus said.

His team is fabricating second-generation composites that incorporate features inspired by the mantis.

At Purdue, compression testing of the new 3-D printed biomimetic composite with herringbone architecture showed that it can withstand higher stresses than samples having a straight helicoidal architecture. The researchers refer to the herringbone structure as sinusoidal.

"Even though both samples contain the same constituents, this sinusoidal architecture, in particular, can absorb more energy and dissipates damage to prevent failure of the structure," Zavattieri said.

Moreover, the research team also found that the very outer layer of the dactyl club's impact region contains nanoparticles that may work to spread stress, preventing the club from breaking.

"Near the surface, instead of having fibers, you have a transition to nanoparticles, and we think these nanoparticles serve the function of distributing the stress," Zavattieri said.

Future work will include efforts to incorporate some of the features found in the herringbone structure into existing helicoidal composites.

In addition to the research teams at UC Riverside and Purdue, researchers at UC San Diego, the University of Minnesota, Hysitron Inc., TESCAN USA Inc. and Western Sydney University in Australia contributed to this research.