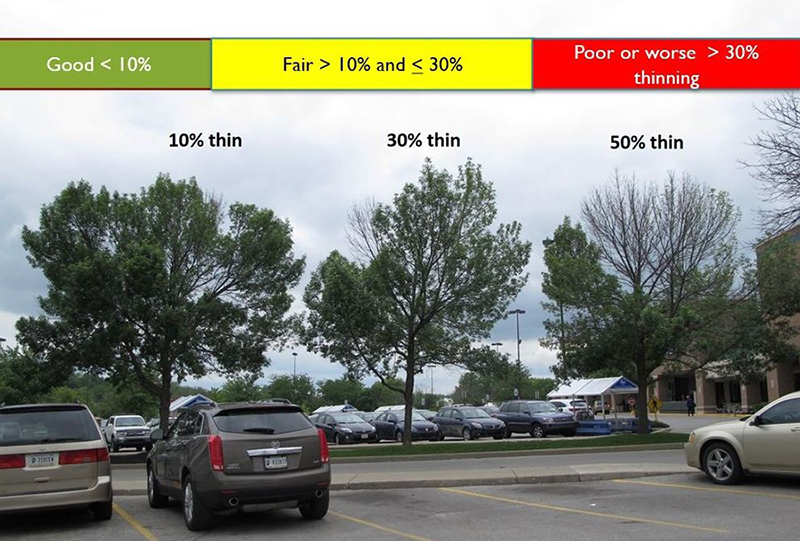 WEST LAFAYETTE, Ind. - Cities and towns with "urban forests" such as parks and streets lined with trees could spend less money by taking steps to save emerald ash borer-infested trees early rather than wait until they can only replace them, Purdue University researchers concluded in a study.

A five-member team co-led by Cliff Sadof, professor of entomology, and Matt Ginzel, associate professor in the Department of Entomology and Department of Forestry and Natural Resources, developed a model to help foresters predict the progression of ash decline over time. This model helps them use early reports of damaged trees to alert the community to the imminent threat posed by EAB. The percentage of damaged ash trees in a city typically doubles every year.

"Damaged trees are often not noticed until they have lost 30 percent of their canopy. Unfortunately, by then it's usually too late to save them from EAB," Sadof said.

Although it is possible to protect the remaining green canopy in infested trees, the damage that has already occurred increases the potential for loss of structural integrity and aesthetic value. For these reasons, Sadof recommends calling in a certified arborist to assess whether a tree with this level of damage is worth saving with recommended insecticide treatments.

The research team was tasked with examining early EAB infestation and developing a system to estimate canopy decline over time. Their work was funded by the U.S. Department of Agriculture's National Institute of Food and Agriculture and the state Legislature-funded AgSEED, short for Agricultural Science and Extension for Economic Development.

The researchers developed a model for predicting the progression of the decline and eventual death of infested ash trees and validated it with two kinds of data - the removal of 14,000 ash trees destroyed by the EAB in Fort Wayne and the accumulation of ash trees in Indianapolis and Lafayette that lost at least 30 percent of their canopy.

"By systematically surveying ash trees, a community can figure out where they are in the progression of ash decline," Sadof said. "We hope that putting a timeline on the wave of ash destruction could get communities to start saving their trees before it is too late."

The researchers also developed a web-based EAB cost calculator that compares annual and cumulative costs involved in saving or replacing trees. They determined that strategies relying mostly on saving ash trees were less expensive and produced a larger "forest" than strategies that involved removing and replacing trees.

The EAB attacks and kills the trees of most North American ash species. Since its detection in Detroit in 2002, it has spread to 25 states and two Canadian provinces, killing hundreds of millions ash trees, according to the Emerald Ash Borer Information Network. Potential for much more destruction is great because there are about 8 billion ash trees in North America.

Purdue Extension's Tree Doctor app can help foresters better communicate the specific levels of canopy loss they are seeing in infested ash trees. The app, for iPhone and Android users, covers over 200 tree problems in more than 60 kinds of trees. It is available at www.edustore.purdue.edu. Search the site for "Tree Doctor."

"Just because you see trees dying doesn't mean it's too late," Sadof said.

The research, titled "Tools for Staging and Managing Emerald Ash Borer in the Urban Forest," has been accepted by the journal Arboriculture & Urban Forestry for publication this fall.

Advances in control can help municipal foresters save ash trees from emerald ash borer (EAB) [Agrilus planipennis (Fairmaire)] in urban forests. Although ash trees of any size can be protected from this pest, cities often do not implement programs because they fail to recognize and act on incipient populations of EAB. In this study we developed a model for predicting ash mortality over an 8-year period and validated it with data from the removal of > 14,000 ash trees killed by EAB in Fort Wayne, IN. We then developed a sampling scheme to help foresters map their ash trees along the expected progression of ash decline. We then used this model to modify a web-based EAB cost calculator that compares discounted annual and cumulative costs of implementing a variety of management strategies. We determined that strategies that most heavily relied on saving ash trees were less expensive and produced a larger forest than those strategies that mostly removed and replaced ash trees. Ratios of total discounted costs to discounted cumulative benefits of strategies that saved most ash trees were over two thirds lower than strategies of proactive tree removal and replacement. Delaying implementation of an ash management program until damage would be visible and more obvious to the community (year 5 of the model) decreased the cost/benefit ratio by < 5%. Thus, delays that rely on the abundance of locally damaged trees to bolster community support do not necessarily diminish the utility of implementing a control strategy.