Bush women discuss ‘Women in the White House and Beyond' 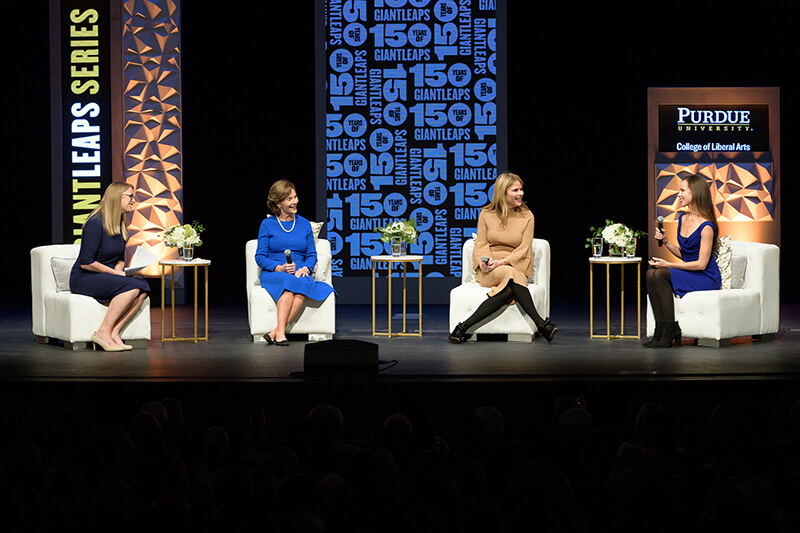 “Women in the White House and Beyond: A Conversation with Mrs. Laura W. Bush, Barbara Pierce Bush and Jenna Bush Hager” was presented by the College of Liberal Arts and the Department of History as part of the Sears Lecture Series. This was one of many events celebrating Purdue’s Sesquicentennial, 150 Years of Giant Leaps. This yearlong celebration is highlighting Purdue’s remarkable history of giant leaps, while focusing on what giant leaps Purdue can take to address the world’s problems. The campaign launched during Homecoming 2018 and there will be numerous events through Homecoming 2019, as well as the various Ideas Festival events, which are the centerpiece of the Giant Leaps Sesquicentennial Campaign.

Mrs. Laura W. Bush, former First Lady of the United States, is an advocate for literacy, education and women’s rights. After leaving the White House, President and Mrs. Bush founded the George W. Bush Presidential Center in Dallas. The center is home to the Bush Presidential Museum and Library and the George W. Bush Institute, a public policy center established to solve today’s most pressing challenges by developing leaders, advancing policy and taking action.

Jenna Bush Hager is a contributing correspondent on NBC's “Today” show and an editor-at-large for Southern Living magazine. She is also the author of The New York Times best-seller “Ana's Story: A Journey of Hope,” which she wrote after traveling to Latin America in 2006 as an intern with UNICEF. “Ana's Story” is based on the life of a 17-year-old single mother with HIV who struggles to shield her child from the life she had of abuse and neglect. Hager remains involved with UNICEF and is currently the chair of its Next Generation initiative, which is dedicated to reducing childhood deaths around the world.

Barbara Pierce Bush is CEO and co-founder of Global Health Corps, which mobilizes a global community of young leaders to build the movement for health equity. GHC was founded in 2009 by six 20-somethings who were challenged by Peter Piot at the aids2031 Young Leaders Summit to engage their generation in solving the world’s biggest health challenges. Bush and her co-founders were united by the belief that health is a human right and that their generation must build the world where this is realized. Since that time, GHC has placed more than 700 young leaders on the front lines of health equity in Burundi, Uganda, Tanzania, Malawi, Rwanda, Zambia and the U.S., developing a cadre of creative, effective, and compassionate change makers.

The Sears Lecture Series was established by Louis Martin Sears. He established the series to present public lectures free of charge. Sears was a faculty member in the then-joint Department of History and Political Science from 1920 until his retirement in 1956. Sears specialized in diplomatic history and biography and was the author of numerous books. Purdue's history and political science departments present the series bearing his name.