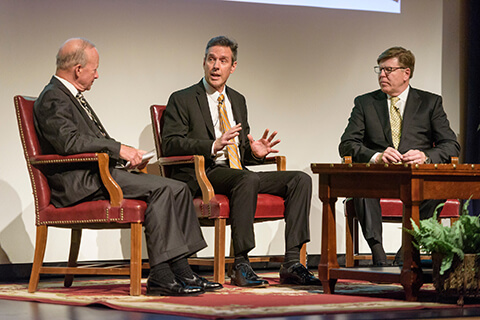 WEST LAFAYETTE, Ind. - With the world population on pace to hit 9.7 billion by 2050, there is increasing concern about our ability to produce enough food to feed people around the globe. Food shortages already are impacting countries like South Sudan, Somalia, Nigeria and Venezuela in unprecedented numbers and with severe consequences. Millions are on the brink of famine.

The expanding food crisis - and what can be done about it - was the focus of “Food Security: Feeding the World in 2050,” a fireside chat presented by Purdue University President Mitch Daniels on Monday (Oct. 16) in Stewart Center’s Fowler Hall. Guest speakers were Sean Callahan, president and CEO of Catholic Relief Services (CRS), and Chris Policinski, president and CEO of Land O’Lakes Inc., who have been outspoken advocates about the need to address food shortages.

The event was hosted by the Office of the Provost and the Office of the Executive Vice President for Research and Partnerships. Carolyn Y. Woo, Purdue Distinguished President’s Fellow for Global Development and former CEO of CRS, introduced the guests.

Just returning from Uganda, where more than 1 million South Sudanese have fled because of violence and a prolonged drought, Callahan said, “By the time a famine has been declared, it is too late for many,” referencing the recent famine in parts of South Sudan.

“We’ve seen that investments in agriculture are paying off. The farmers we work with around the world don’t want a handout. They want a hand-up,” Callahan said. “Through simple solutions, we can give them the jumpstart they need to feed their families and, eventually, their communities.” CRS works in more than 100 countries to support small-holder famers by introducing new techniques and technologies and by linking them to markets.

Land O’Lakes International Development, in a partnership with the U.S. Agency for International Development (USAID), has led efforts to increase food security through programs that train people in impoverished countries to maintain their own dairy and livestock farms. Land O’Lakes Inc. also sponsors a fellowship program, Global Food Challenge Emerging Leaders for Food Security, to support students seeking answers on how to increase food production by 70 percent to feed more than 9 billion people by 2050.

Policinski said ensuring food security is the answer to driving global security. “Feeding a hungry world is both an obligation and an opportunity,” he told the U.S. Global Leadership Coalition in an interview. “One of America’s greatest, yet least acknowledged success stories, is our increase in agricultural productivity over the past century. How have we done this? It’s through better farming techniques and technology, both of which we need to share with the rest of the world through our efforts to alleviate global hunger.”

Purdue University, the home of the Center for Global Food Security, is among the leading institutions addressing food insecurity through research and advocacy.

Land O’Lakes Inc., one of America's premier agribusiness and food companies, is a member-owned cooperative with industry-leading operations that span the spectrum from agricultural production to consumer foods. With 2016 annual sales of $13 billion, Land O’Lakes is one of the nation’s largest cooperatives, ranking 209th on the Fortune 500. Building on a legacy of more than 96 years of operation, Land O’Lakes today operates some of the most respected brands in agribusiness and food production including LAND O LAKES® Dairy Foods, Purina Animal Nutrition, WinField United and Land O’Lakes SUSTAIN™. The company does business in all 50 states and more than 60 countries. Land O’Lakes Inc.’s corporate headquarters is located in Arden Hills, Minn.

About CRS: Catholic Relief Services is the official international humanitarian agency of the Catholic community in the United States. The agency alleviates suffering and provides assistance to people in need in more than 100 countries, without regard to race, religion or nationality. CRS’ relief and development work is accomplished through programs of emergency response, HIV, health, agriculture, education, microfinance and peacebuilding. For more information, visit www.crs.org.