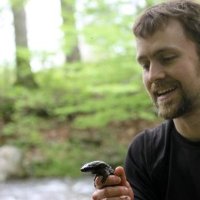 Tell us about your background?
I grew up in Vernon, Indiana and have been involved with wildlife research/management in some capacity since I started my undergraduate work at Purdue in 2002. I worked for the Indiana Department of Natural Resources for 1.5 years prior to starting graduate school in 2007. I studied Eastern Hellbender biology in graduate school and graduated with a M.S. in Wildlife Biology from Purdue in 2010. After graduate school I worked for an ecological consulting company, Eco-Tech Consultants, Inc., in Louisville, primarily doing endangered bat surveys. I started this position in June of 2015.
How did you come to work on the Eastern Hellbender? What do people need to know about them?

I first worked with the Eastern Hellbender when I had the opportunity to accompany the Indiana DNR state herpetologist on a survey in the Blue River. It was something I had always wanted to see! A few years later, while working as the herpetologist’s technician for the Indiana DNR, a M.S. project focused on Eastern Hellbender biology in the Blue River was advertised, I applied, and I then got to work with them for the next three years. It turned out that my project was the first part of a much larger project focused on restoring the hellbender throughout its former habitat in Indiana.

Many people ask, “what good is it and why should we care?” This is a difficult question to answer and there is no one size fits all response for everyone. Hellbenders are a very important indicator of water quality, and if their numbers start to decline then it is likely there is a water quality issue, which is relevant to everyone. From an ecological standpoint, hellbenders are thought to play a major role in regulating crayfish populations. The loss of hellbenders could have a cascade effect throughout a river’s ecosystem. A third thing to consider is that hellbenders, as a species, have been around for nearly 2 million years, far longer than modern humans, and there are no do-overs concerning species extinction.

How did you get involved with FNR Extension and outreach?
I did my graduate work with the Eastern Hellbender in southern Indiana. I had been working at Eco-Tech for about five years when a position for a "Research and Wildlife Extension Specialist" working with hellbenders was advertised. It seemed like an excellent fit.
What do you enjoy most about your work?
I enjoy the thought of having a positive impact on wildlife conservation. Meeting landowners that genuinely seem to care about natural resources conservation has been a big bonus.
What is the biggest challenge you face in your job?
As someone that is relatively new to the extension experience, my biggest challenge has been developing programs that I feel will help spread the conservation message we are trying to convey. It's easy to come up with ideas, but coming up with ideas that can be implemented and impact conservation in a positive way is much more challenging.
What part of your job did you least expect to be doing?
Communicating directly with people. I've always had a love for nature and animals, but have generally been somewhat introverted. I never would have thought one of the major aspects of my career would involve communicating with the public.
Do you have an outside hobby?
I have several hobbies that wax and wane depending on the weather and availability. I enjoy kayaking (which I've managed to integrate into my job!) and tennis. When the weather turns bad I especially enjoy movies. I've recently resumed an old hobby...keeping tarantulas.