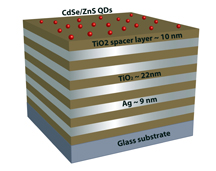 This graphic depicts a new "nanostructured metamaterial" - layers of silver and titanium oxide and tiny components called quantum dots - to dramatically change the properties of light. Researchers are working to perfect the metamaterials, which might be capable of ultra-efficient transmission of light, with potential applications including advanced solar cells and quantum computing. Findings and this image appeared in the journal Science in April. (Image courtesy of CUNY)

The metamaterial - layers of silver and titanium oxide and tiny components called quantum dots - dramatically changes the properties of light. The light becomes "hyperbolic," which increases the output of light from the quantum dots.

"Altering the topology of the surface by using metamaterials provides a fundamentally new route to manipulating light," said Evgenii Narimanov, a Purdue University associate professor of electrical and computer engineering.

Findings were detailed in a research paper published April 13 in the journal Science.

Such metamaterials could make it possible to use single photons – the tiny particles that make up light – for switching and routing in future computers. While using photons would dramatically speed up computers and telecommunications, conventional photonic devices cannot be miniaturized because the wavelength of light is too large to fit in tiny components needed for integrated circuits.

"For example, the wavelength used for telecommunications is 1.55 microns, which is about 1,000 times too large for today's microelectronics," Narimanov said.

Nanostructured metamaterials, however, could make it possible to reduce the size of photons and the wavelength of light, allowing the creation of new types of nanophotonic devices, he said.

The work was a collaboration of researchers from Queens and City Colleges of City University of New York (CUNY), Purdue University, and University of Alberta. The experimental study was led by the CUNY team, while the theoretical work was carried out at Purdue and Alberta.

The approach could help researchers develop "quantum information systems" far more powerful than today's computers. Such quantum computers would take advantage of a phenomenon described by quantum theory called "entanglement." Instead of only the states of one and zero, there are many possible "entangled quantum states" in between.

The research has been funded by the National Science Foundation and the U.S. Army Research Office.

Note to Journalists: A copy of the research paper is available by contacting Emil Venere at 765-494-4709, venere@purdue.edu

3Department of Electrical and Computer Engineering, University of Alberta,

Light-matter interactions can be controlled by manipulating the photonic environment. We uncovered an optical topological transition in strongly anisotropic metamaterials that results in a dramatic increase in the photon density of states—an effect that can be used to engineer this interaction. We describe a transition in the topology of the iso-frequency surface from a closed ellipsoid to an open hyperboloid by use of artificially nanostructured metamaterials. We show that this topological transition manifests itself in increased rates of spontaneous emission of emitters positioned near the metamaterial. Altering the topology of the iso-frequency surface by using metamaterials provides a fundamentally new route to manipulating light-matter interactions.