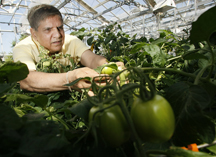 WEST LAFAYETTE, Ind. - The brown tissue that signals blossom end rot in tomatoes is a major problem for large producers and home gardeners, but a Purdue University researcher has unknowingly had the answer to significantly lowering occurrences of the disease sitting on a shelf for 20 years.

In the early 1990s, horticulture professor Avtar Handa developed a transgenic tomato with a thicker juice that yields 10 percent more tomato paste than parental, non-engineered tomatoes. He said large commercial producers were interested but weren't ready to bring a transgenic tomato on the market, especially with the regulatory approval process that was required. So the research findings were published and the seeds stored away.

About two years ago, researchers at the University of California-Davis asked Handa for seeds from this tomato line. They were particularly interested in Handa's observations about how the tomatoes stored calcium, as several fruit diseases are thought to be caused by calcium deficiency. In particular, blossom end rot results in dark, softened spots on the end of tomatoes.

"Calcium is difficult to move from the soil into the plant," Handa said. "It is a major problem in tomatoes and many other fruit crops."

Handa shared his seeds with Elizabeth Mitcham, a post-harvest pomologist, and Sergio Tonetto de Freitas, formerly a doctoral student and now a postdoctoral researcher, both at UC Davis. They found that Handa's tomato plants essentially allow more calcium to be free and mobile in tomato cells, significantly reducing the occurrence of blossom end rot. According to the findings, published in the early online version of The Plant Journal, about 80 percent of wild-type tomatoes will suffer from blossom end rot in conditions conducive to the disease. Under similar conditions, only 30 percent of Handa's transgenic tomatoes develop blossom end rot. 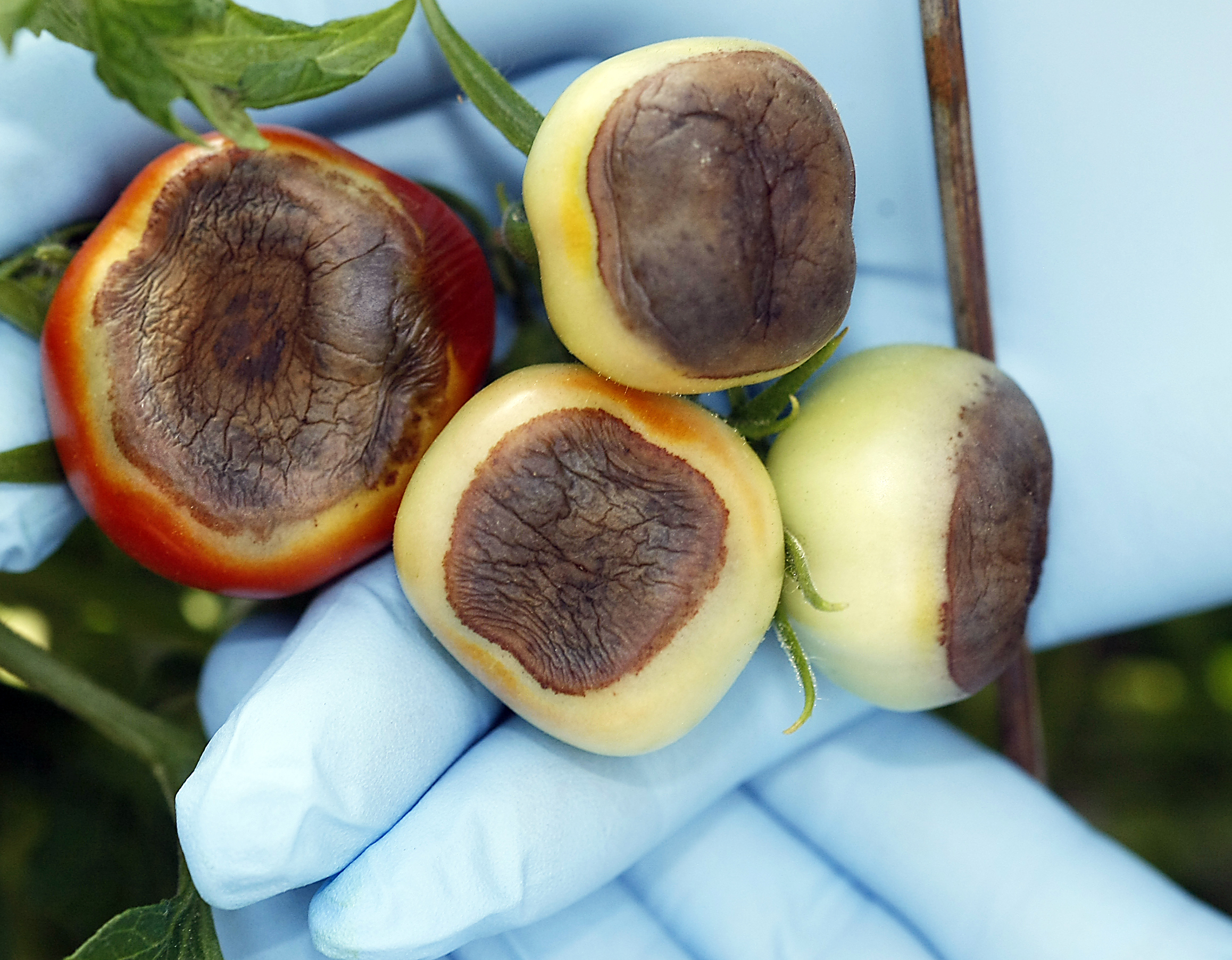 "It's a significant decrease - more than twofold," Mitcham said.

"If you have a lot of pectin methylesterase activity, much of the calcium in the cells becomes bound to the cell wall," Mitcham said. "That calcium is then unavailable to protect the cell membrane and prevent these physiological disorders."

Handa's strategy for producing thicker juices involved silencing pectin methylesterase production in a transgenic tomato, greatly reducing the binding sites for calcium within the fruit cell walls. That allowed the calcium to be used in other parts of the tomato's cells.

Mitcham will continue to study the mechanisms that cause blossom end rot in tomatoes, as well as how pectin methylesterases and calcium may play roles in other plant diseases thought to be caused by calcium deficiencies, including in apples, lettuce, peppers and watermelons.

Handa said this development, and the fact transgenic plants have become more common, might get tomato producers interested in the tomato genotype he developed more than 20 years ago.

"We're coming to a time when people are starting to use genetically modified crops," Handa said. "The technology is matured and dependable and ready to be used now."

The U.S. Department of Agriculture, a CAPES Foundation and Fulbright Program scholarship funded the research.

Blossom-end rot (BER) in tomato fruit (Solanum lycopersicum) is believed to be a calcium (Ca2+) deficiency disorder, but the mechanisms involved in its development are poorly understood. Our hypothesis is that high expression of pectin methylesterases (PMEs) increases Ca2+ bound to the cell wall, subsequently decreasing Ca2+ available for other cellular functions and, thereby, increasing fruit susceptibility to BER. The objectives of this study were to evaluate the effect of PME expression, and amount of esterified pectins and Ca2+ bound to the cell wall on BER development in tomato fruit. Wild type and PME-silenced tomato plants were grown in a greenhouse. At full bloom, flowers were pollinated and Ca2+ was no longer provided to the plants to induce BER. Our results show that suppressing expression of PMEs in tomato fruit reduced the amount of Ca2+ bound to the cell wall, and also reduced fruit susceptibility to BER. Both the wild type and PME-silenced fruit had similar total tissue, cytosolic and vacuolar Ca2+ concentrations, but wild type fruit had lower water soluble apoplastic Ca2+ content and higher membrane leakage, one of the first symptoms of BER. Our results suggest that apoplastic water soluble Ca2+ concentration influences fruit susceptibility to Ca2+ deficiency disorders.