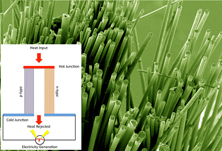 This image shows glass fibers coated with a thermoelectric material that generates electrical current when exposed to heat. The technology might be used to harvest energy from hot pipes or engine components, possibly representing a way to recover energy wasted in factories, power plants and cars. (Purdue University photo/Scott W. Finefrock)

"The ugly truth is that 58 percent of the energy generated in the United States is wasted as heat," said Yue Wu, a Purdue University assistant professor of chemical engineering. "If we could get just 10 percent back that would allow us to reduce energy consumption and power plant emissions considerably."

Researchers have coated glass fibers with a new "thermoelectric" material they developed. When thermoelectric materials are heated on one side electrons flow to the cooler side, generating an electrical current.

Coated fibers also could be used to create a solid-state cooling technology that does not require compressors and chemical refrigerants. The fibers might be woven into a fabric to make cooling garments.

The glass fibers are dipped in a solution containing nanocrystals of lead telluride and then exposed to heat in a process called annealing to fuse the crystals together.

Such fibers could be wrapped around industrial pipes in factories and power plants, as well as on car engines and automotive exhaust systems, to recapture much of the wasted energy. The "energy harvesting" technology might dramatically reduce how much heat is lost, Wu said.

Findings were detailed in a research paper appearing last month in the journal Nano Letters. The paper was written by Daxin Liang, a former Purdue exchange student from Jilin University in China; Purdue graduate students Scott Finefrock and Haoran Yang; and Wu.

Today's high-performance thermoelectric materials are brittle, and the devices are formed from large discs or blocks.

"This sort of manufacturing method requires using a lot of material," Wu said.

The new flexible devices would conform to the irregular shapes of engines and exhaust pipes while using a small fraction of the material required for conventional thermoelectric devices.

"This approach yields the same level of performance as conventional thermoelectric materials but it requires the use of much less material, which leads to lower cost and is practical for mass production," Wu said.

The new approach promises a method that can be scaled up to industrial processes, making mass production feasible.

"We've demonstrated a material composed mostly of glass with only a 300-nanometer-thick coating of lead telluride," Finefrock said. "So while today's thermoelectric devices require large amounts of the expensive element tellurium, our material contains only 5 percent tellurium. We envision mass production manufacturing for coating the fibers quickly in a reel-to-reel process."

In addition to generating electricity when exposed to heat, the materials also can be operated in a reverse manner: Applying an electrical current causes it to absorb heat, representing a possible solid-state air-conditioning method. Such fibers might one day be woven into cooling garments or used in other cooling technologies.

The researchers have shown that the material has a promising thermoelectric efficiency, which is gauged using a formula to determine a measurement unit called ZT. A key part of the formula is the "Seebeck coefficient," named for 19th century German physicist Thomas Seebeck, who discovered the thermoelectric effect.

"It's hard to optimize all of these three parameters simultaneously because if you increase electrical conductivity, and thermal conductivity goes up, the Seebeck coefficient drops," Wu said.

Most thermoelectric materials in commercial use have a ZT of 1 or below. However, nanostructured materials might be used to reduce thermal conductivity and increase the ZT number.

The Purdue researchers have used the ZT number to calculate the maximum efficiency that is theoretically possible with a material.

"We analyze the material abundance, the cost, toxicity and performance, and we established a single parameter called the efficiency ratio," Wu said.

Although high-performance thermoelectric materials have been developed, the materials are not practical for widespread industrial applications.

"Today's higher performance ones have a complicated composition, making them expensive and hard to manufacture," Wu said. "Also, they contain toxic materials, like antimony, which restricts thermoelectric research."

The nanocrystals are a critical ingredient, in part because the interfaces between the tiny crystals serve to suppress the vibration of the crystal lattice structure, reducing thermal conductivity. The materials could be exhibiting "quantum confinement," in which the structures are so tiny they behave nearly like individual atoms.

"This means that, as electrons carry heat through the structures, the average voltage of those heat-carrying electrons is higher than it would be in larger structures," Finefrock said. "Since you have higher-voltage electrons, you can generate more power."

This confinement can raise the ZT number.

A U.S. patent application has been filed for the fiber-coating concept.

Future work could focus on higher temperature annealing to improve efficiency, and the researchers also are exploring a different method to eliminate annealing altogether, which might make it possible to coat polymer fibers instead of glass.

"Polymers could be weaved into a wearable device that could be a cooling garment," Wu said.

The researchers also may work toward coating the glass fibers with a polymer to improve the resilience of the thermoelectric material, which tends to develop small cracks when the fibers are bent at sharp angles.

Researchers demonstrated the concept with an experiment using a system containing tubes of differing diameters nested inside a larger tube. Warm water flows through a central tube and cooler water flows through an outer tube, with a layer of thermoelectric material between the two.

The Purdue researchers also are exploring other materials instead of lead and tellurium, which are toxic, and preliminary findings suggest these new materials are capable of a high ZT value.

"Of course, the fact that our process uses such a small quantity of material – a layer only 300 nanometers thick – minimizes the toxicity issue," Wu said. "However, we also are concentrating on materials that are non-toxic and abundant."

The work has been funded by the National Science Foundation and U.S. Department of Energy.

Note to Journalists: A copy of the research paper is available by contacting Emil Venere, 765-494-4709, venere@purdue.edu

Recent efforts on the development of nanostructured thermoelectric materials from nanowires (Boukai,A. I.; et al. Nature 2008, 451, (7175), 168−171; Hochbaum, A. I.; et al. Nature 2008, 451, (7175), 163−167) and nanocrystals (Kim, W.; et al. Phys. Rev. Lett. 2006, 96, (4), 045901; Poudel, B.; et al. Science 2008, 320, (5876), 634-638; Scheele, M.; et al. Adv. Funct. Mater. 2009, 19, (21), 3476−3483; Wang, R. Y.; etal. Nano Lett. 2008, 8, (8), 2283−2288) show the comparable or superior performance to the bulk crystals possessing the same chemical compositions because of the dramatically reduced thermal conductivity due to phonon scattering at nanoscale surface and interface. Up to date, the majority of the thermoelectric devices made from these inorganic nanostructures are fabricated into rigid configuration. The explorations of truly flexible composite-based flexible thermoelectric devices (See, K. C.; et al. Nano Lett. 2010, 10, (11), 4664−4667) have thus far achieved much less progress, which in principle could significantly benefit the conversion of waste heat into electricity or the solid-state cooling by applying the devices to any kind of objects with any kind of shapes. Here we report an example using a scalable solution-phase deposition method to coat thermoelectric nanocrystals onto the surface of flexible glass fibers. Our investigation of the thermoelectric properties yields high performance comparable to the state of the art from the bulk crystals and proof-of-concept demonstration also suggests the potential of wrapping the thermoelectric fibers on the industrial pipes to improve the energy efficiency.