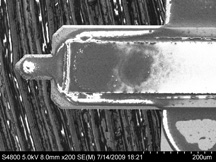 Researchers have learned how to improve the performance of sensors that use tiny vibrating "microcantilevers," like the one pictured here, to detect chemical and biological agents for applications from national security to food processing. (Vijay Kumar, Birck Nanotechnology Center, Purdue University)

WEST LAFAYETTE, Ind. - Researchers have learned how to improve the performance of sensors that use tiny vibrating microcantilevers to detect chemical and biological agents for applications from national security to food processing.

The microcantilevers - slivers of silicon shaped like small diving boards - vibrate at their natural, or "resonant," frequency. Analyzing the frequency change when a particle lands on the microcantilever reveals the particle's presence and potentially its mass and composition.

The sensors are now used to research fundamental scientific questions. However, recent advances may allow for reliable sensing with portable devices, opening up a range of potential applications, said Jeffrey Rhoads, an assistant professor of mechanical engineering at Purdue University.

Creating smaller sensors has been complicated by the fact that measuring the change in frequency does not work as well when the sensors are reduced in size. The researchers showed how to sidestep this obstacle by measuring amplitude, or how far the diving board moves, instead of frequency.

"When you try to shrink these systems, the old way of measuring does not work as well," Rhoads said. "We've made the signal processing part easier, enabling small-scale, lower-power sensors, which are more reliable and have the potential for higher sensitivities."

Findings are detailed in a paper appearing online this week in the Journal of Microelectromechanical Systems, which is available at https://ieeexplore.ieee.org/xpls/abs_all.jsp?arnumber=6145730. The paper was written by graduate research assistants Vijay Kumar and J. William Boley, undergraduate student Yushi Yang, mechanical engineering professor George Chiu and Rhoads. An earlier paper was published in April in the weekly journal Applied Physics Letters.

The work is based at the Dynamic Analysis of Micro- and Nanosystems Laboratory at Purdue's Birck Nanotechnology Center.

The aim is to apply the new approach to build sensors capable of reliably measuring particles that have a mass of less than one picogram - or trillionth of a gram - at room temperature and atmospheric pressure.

The microcantilever sensors have promise in detecting and measuring constituents such as certain proteins or DNA for biological testing in liquids, gases and the air. The devices might find applications in breath analyzers, industrial and food processing, national security and defense, and food and water quality monitoring.

"One question about these sensors is whether they will continue to work in the field," Rhoads said. "We've been doing a lot of blind, false-positive and false-negative tests to see how they perform in a realistic environment. We've had only a few false positives and negatives in months of testing."

The findings focus on detecting gases and show that the new sensors should be capable of more reliably measuring smaller quantities of gas than is possible with current sensors.

Measuring amplitude is far easier than measuring frequency because the amplitude changes dramatically when a particle lands on the microcantilever, whereas the change in frequency is minute.

"We haven't beaten the sensitivity of all other sensors yet," Rhoads said. "But the difference is that we are trying to do it with a compact device that is truly implementable at the microscale, while many others use fairly large laboratory equipment."

The researchers tested the cantilevers in a chamber filled with precisely controlled quantities of methanol to study their reliability. A patent is pending on the invention.

The research has been partially funded by the National Science Foundation. Student support was provided by Purdue and the Purdue Research Foundation.

Modeling, Analysis, and Experimental Validation of a Bifurcation-Based Microsensor

The potential to detect very small amounts of added mass has driven research in chemical and biological sensors based on resonant micro- and nano-electromechanical systems over the past two decades. While traditional resonant mass sensors utilize chemomechanically induced shifts in linear natural frequency for mass detection, alternate sensing approaches, which exploit the near-resonant nonlinear behavior, have garnered interest from the research community due to their potential to yield improved sensor metrics and simplify final device implementations. This paper investigates the development of an amplitude-based, mass-sensing approach, which utilizes the dynamic transitions that occur near a saddle-node bifurcation in the nonlinear frequency response of a piezoelectrically actuated microcantilever. Specifically, the work details the modeling, analysis and experimental validation of this mass sensing technique. The experimental results presented here not only prove the feasibility of the proposed sensing approach, but also allows for the direct evaluation of pertinent sensor metrics.