WEST LAFAYETTE, Ind. - A two-year study of high school football players suggests that concussions are likely caused by many hits over time and not from a single blow to the head, as commonly believed.

Purdue University researchers have studied football players for two seasons at Jefferson High School in Lafayette, Ind., where 21 players completed the study the first season and 24 the second season, including 16 repeating players.

Helmet-sensor impact data from each player were compared with brain-imaging scans and cognitive tests performed before, during and after each season.

"The most important implication of the new findings is the suggestion that a concussion is not just the result of a single blow, but it's really the totality of blows that took place over the season," said Eric Nauman, an associate professor of mechanical engineering and an expert in central nervous system and musculoskeletal trauma. "The one hit that brought on the concussion is arguably the straw that broke the camel's back."

Researchers evaluated players using a type of brain imaging technology called functional magnetic resonance imaging, or fMRI, along with a computer-based neurocognitive screening test. The fMRI scans reveal which parts of the brain are most active during specific tasks.

Thomas Talavage, an expert in functional neuroimaging and co-director of the Purdue MRI Facility, said the scans indicate players are adapting their mental processes to deal with brain changes.

"The changes in brain activity we are observing suggest that a player is having to use a different strategy to perform a task, and that is likely because functional capacity is reduced," Talavage said. "The level of change in the fMRI signal is significantly correlated to the number and distribution of hits that a player takes. Performance doesn't change, but brain activity changes, showing that certain areas are no longer being recruited to perform a task." 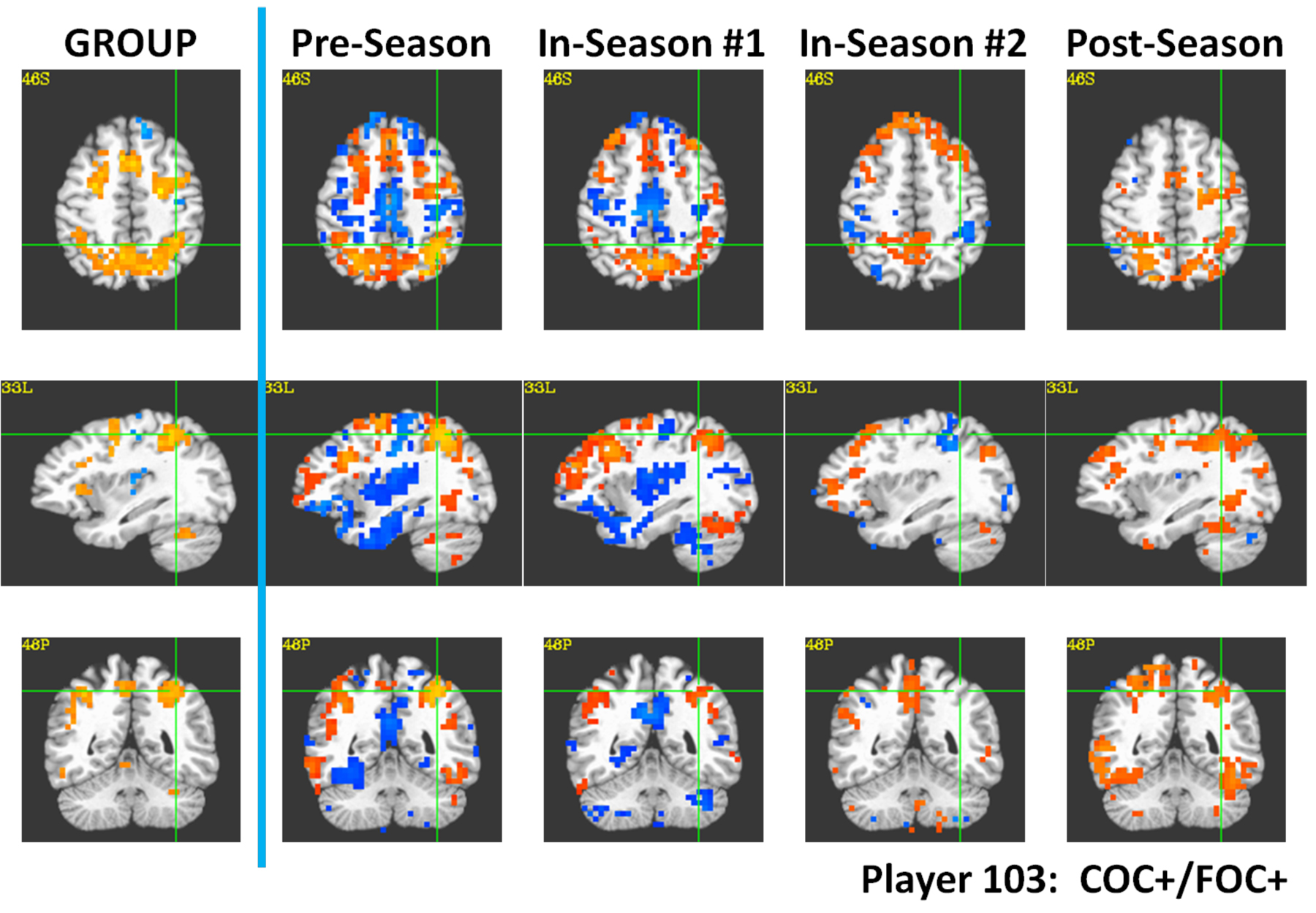 Brain scans show differences among high school football players in a two-year study that suggests concussions are likely caused by many hits over time and not from a single blow to the head, as commonly believed. (Purdue University image/Thomas Talavage)

Findings, detailed in a paper to appear online in the Journal of Biomechanics, are contrary to conventional thinking.

"Most clinicians would say that if you don't have any concussion symptoms you have no problems," said Larry Leverenz, an expert in athletic training and a clinical professor of health and kinesiology. "However, we are finding that there is actually a lot of change, even when you don't have symptoms."

The research may help to determine how many blows it takes to cause impairment, which could lead to safety guidelines on limiting the number of hits a player receives per week.

"Any change in fMRI data is a concern, but we don't yet know what these changes mean, what they translate to, in terms of cognitive impairment," Breedlove said.

A common assumption in sports medicine is that certain people are innately more susceptible to head injury. However, the new findings suggest the number of hits received during the course of a season is the most important factor, Talavage said.

"Over the two seasons we had six concussed players, but 17 of the players showed brain changes even though they did not have concussions," Talavage said. "There is good correlation with the number of hits players received, but we need more subjects."

The researchers have expanded the study to include an additional high school football team and girls' soccer.

"We want to increase the number of football players in the study and also include soccer to study athletes who don't wear head protection," Nauman said. "We also want to include girls to see whether they are affected differently than boys."

The research findings represent a dilemma because they suggest athletes may suffer a form of injury that is difficult to diagnose.

"This might be especially important in young people because the brain is still developing, so even though subtle unexpressed damage doesn't manifest as a concussion it could affect the brain later in life," Gilger said.

Changes were seen in regions of the brain that have been associated with chronic traumatic encephalopathy (CTE), a progressive degenerative disease found in people who suffer numerous concussions and other forms of head injury.

"This is still circumstantial evidence, but it suggests that whether you are concussed or not your brain is changing as a result of all these hits, and the regions most affected are the ones that exhibit CTE," Nauman said.

Players in the study received from 200 to nearly 1,900 hits to the head in a single season, with two players exceeding 1,800 hits. Helmet-sensor data indicated impact forces to the head ranged from 20 Gs to more than 100 Gs.

A soccer player "heading" a ball experiences an impact of about 20 Gs.

Findings could aid efforts to develop more sensitive and accurate methods to detect cognitive impairment and concussions; more accurately characterize and model cognitive deficits that result from head impacts; determine the cellular basis for cognitive deficits after a single impact or repeated impacts; and develop new interventions to reduce the risk and effects of head impacts.

"Now that we know there is definitely a buildup of damage before the concussion occurs, ultimately, there is hope that we can do more to prevent concussions," Nauman said.

The work is ongoing and supported with grants from the Indiana State Department of Health's Spinal Cord and Brain Injury Research Fund, General Electric Healthcare, the Indiana Clinical and Translational Sciences Institute, and through the National Science Foundation and National Defense Science and Engineering Graduate Fellowships.

Researchers also will follow the case studies of players who take the most hits to see if there is evidence of permanent changes in brain structure using MRI scans.

Note to Journalists: Video B-roll, sound bites and a package are available from Jim Schenke, Purdue News Service, at 765-237-7296, jschenke@purdue.edu

Brain changes found in football players thought to be concussion-free

Concussion is growing public health issue in the United States, and chronic traumatic encephalopathy (CTE) is the chief long-term concern linked to repeated concussions. Recently, attention has shifted toward subconcussive blows and the role they may play in the development of CTE. We assembled a cohort of high school football players for two seasons of observation. Accelerations sensors were placed in the helmets, and all contact activity was monitored. Pre-season computer-based neuropsychological tests and functional magnetic resonance imaging (fMRI) tests were also obtained in order to assess cognitive and physiological health. In-season follow-up scans were then obtained both from individuals who had sustained a clinically diagnosed concussion and those who had not. These changes were then related through stepwise regression to history of blows recorded throughout the football season up to the date of the scan. In addition to those subjects who had sustained a concussion, a substantial portion of our cohort who did not sustain concussions showed significant neurophysiological changes. Stepwise regression indicated distinct relationships between the biomechanical histories of subjects and the ensuing neurophysiological change, suggesting that distinct injury processes are at play. Our findings reinforce the hypothesis that the effects of repetitive blows to the head are cumulative and that repeated exposure to subconcussive blows is connected to pathologically altered neurophysiology.