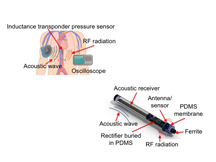 This graphic illustrates the principles behind the operation of a new type of miniature medical sensor powered by acoustic waves, including those found in music such as rap, blues, jazz and rock. The device, a pressure sensor, might ultimately help to treat people stricken with aneurisms or incontinence due to paralysis. (Birck Nanotechnology Center, Purdue University)

– The driving bass rhythm of rap music can be harnessed to power a new type of miniature medical sensor designed to be implanted in the body.

Acoustic waves from music, particularly rap, were found to effectively recharge the pressure sensor. Such a device might ultimately help to treat people stricken with aneurisms or incontinence due to paralysis.

The heart of the sensor is a vibrating cantilever, a thin beam attached at one end like a miniature diving board. Music within a certain range of frequencies, from 200-500 hertz, causes the cantilever to vibrate, generating electricity and storing a charge in a capacitor, said Babak Ziaie, a Purdue University professor of electrical and computer engineering and biomedical engineering.

"The music reaches the correct frequency only at certain times, for example, when there is a strong bass component," he said. "The acoustic energy from the music can pass through body tissue, causing the cantilever to vibrate."

When the frequency falls outside of the proper range, the cantilever stops vibrating, automatically sending the electrical charge to the sensor, which takes a pressure reading and transmits data as radio signals. Because the frequency is continually changing according to the rhythm of a musical composition, the sensor can be induced to repeatedly alternate intervals of storing charge and transmitting data.

"You would only need to do this for a couple of minutes every hour or so to monitor either blood pressure or pressure of urine in the bladder," Ziaie said. "It doesn't take long to do the measurement."

Findings are detailed in a paper to be presented during the IEEE MEMS conference, which will be Jan. 29 to Feb. 2 in Paris. The paper was written by doctoral student Albert Kim, research scientist Teimour Maleki and Ziaie. 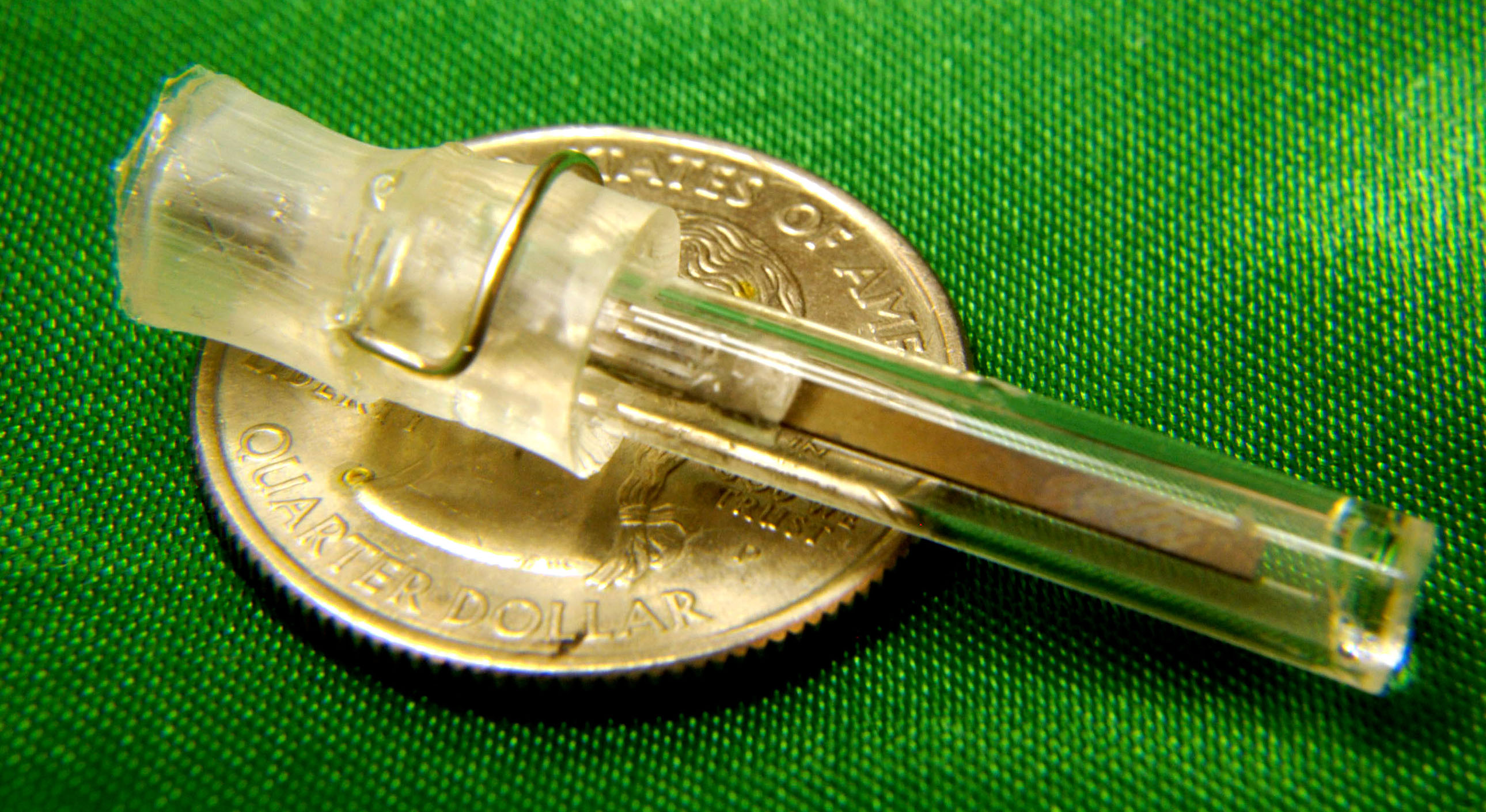 Researchers have created a new type of miniature pressure sensor, shown here, designed to be implanted in the body. Acoustic waves from music or plain tones drive a vibrating device called a cantilever, generating a charge to power the sensor. (Birck Nanotechnology Center, Purdue University)

"This paper demonstrates the feasibility of the concept," he said.

The device is an example of a microelectromechanical system, or MEMS, and was created in the Birck Nanotechnology Center at the university's Discovery Park. The cantilever beam is made from a ceramic material called lead zirconate titanate, or PZT, which is piezoelectric, meaning it generates electricity when compressed. The sensor is about 2 centimeters long. Researchers tested the device in a water-filled balloon.

A receiver that picks up the data from the sensor could be placed several inches from the patient. Playing tones within a certain frequency range also can be used instead of music.

"But a plain tone is a very annoying sound," Ziaie said. "We thought it would be novel and also more aesthetically pleasing to use music."

"Rap is the best because it contains a lot of low frequency sound, notably the bass," Ziaie said.

The sensor is capable of monitoring pressure in the urinary bladder and in the sack of a blood vessel damaged by an aneurism. Such a technology could be used in a system for treating incontinence in people with paralysis by checking bladder pressure and stimulating the spinal cord to close the sphincter that controls urine flow from the bladder. More immediately, it could be used to diagnose incontinence. The conventional diagnostic method now is to insert a probe with a catheter, which must be in place for several hours while the patient remains at the hospital.

"A wireless implantable device could be inserted and left in place, allowing the patient to go home while the pressure is monitored," Ziaie said.

The new technology offers potential benefits over conventional implantable devices, which either use batteries or receive power through a property called inductance, which uses coils on the device and an external transmitter. Both approaches have downsides. Batteries have to be replaced periodically, and data are difficult to retrieve from devices that use inductance; coils on the implanted device and an external receiver must be lined up precisely, and they can only be about a centimeter apart.

A patent application has been filed for the design.

Note to Journalists: An electronic copy of one of the papers is available from Emil Venere, Purdue News Service, at 765-494-4709, venere@purdue.edu

This paper presents design, fabrication and implementation of a novel electromechanical energy scavenging and wireless interrogation scheme using low-frequency components of musical vibrations to overcome challenges associated with previously reported passive transponders such as: short transmission range, misalignment sensitivity and complicated receiver circuitry. The transponder has two phases of operation: 1) mechanical vibration phase, in which an acoustic receiver (a piezoelectric cantilever) converts the sound vibration into electrical power and charges a capacitor; and 2) electrical radiation phase, in which the stored charge is dumped into an LC tank, forcing it to oscillate at its natural resonance frequency and emitting the energy to an outside receiver. In a pressure-sensing configuration, the distance between a planar coil and a ferrite core is modulated by the pressure, thus changing the inductance and, in turn, inducing a change in the frequency of the emitted signal. A prototype transponder was built and tested using a PZT cantilever with a mechanical resonant frequency of 435 Hz encapsulated in a glass capsule (length=40 mm, diameter=8 mm) along with a rectifier circuitry and a storage capacitor. The inductive pressure sensor located outside the capsule had a sensitivity of 2.5k Hz/kPa. We were able to easily pick up the transmitted RF pulses at distances of up to 7 cm without the tight requirement on alignment between the receiver and the transponder coils.