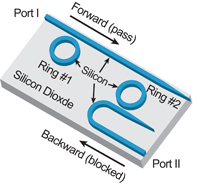 This illustration shows a new "all-silicon passive optical diode," a device small enough to fit millions on a computer chip that could lead to faster, more powerful information processing and supercomputers. The device has been developed by Purdue University researchers. (Birck Nanotechnology Center, Purdue University)

WEST LAFAYETTE, Ind. - Researchers have created a new type of optical device small enough to fit millions on a computer chip that could lead to faster, more powerful information processing and supercomputers.

The "passive optical diode" is made from two tiny silicon rings measuring 10 microns in diameter, or about one-tenth the width of a human hair. Unlike other optical diodes, it does not require external assistance to transmit signals and can be readily integrated into computer chips.

The diode is capable of "nonreciprocal transmission," meaning it transmits signals in only one direction, making it capable of information processing, said Minghao Qi (pronounced Chee), an associate professor of electrical and computer engineering at Purdue University.

"This one-way transmission is the most fundamental part of a logic circuit, so our diodes open the door to optical information processing," said Qi, working with a team also led by Andrew Weiner, Purdue's Scifres Family Distinguished Professor of Electrical and Computer Engineering.

The diodes are described in a paper to be published online Thursday (Dec. 22) in the journal Science. The paper was written by graduate students Li Fan, Jian Wang, Leo Varghese, Hao Shen and Ben Niu, research associate Yi Xuan, and Weiner and Qi.

Although fiberoptic cables are instrumental in transmitting large quantities of data across oceans and continents, information processing is slowed and the data are susceptible to cyberattack when optical signals must be translated into electronic signals for use in computers, and vice versa.

"This translation requires expensive equipment," Wang said. "What you'd rather be able to do is plug the fiber directly into computers with no translation needed, and then you get a lot of bandwidth and security."

Electronic diodes constitute critical junctions in transistors and help enable integrated circuits to switch on and off and to process information. The new optical diodes are compatible with industry manufacturing processes for complementary metal-oxide-semiconductors, or CMOS, used to produce computer chips, Fan said.

"These diodes are very compact, and they have other attributes that make them attractive as a potential component for future photonic information processing chips," she said.

The new optical diodes could make for faster and more secure information processing by eliminating the need for this translation. The devices, which are nearly ready for commercialization, also could lead to faster, more powerful supercomputers by using them to connect numerous processors together.

"The major factor limiting supercomputers today is the speed and bandwidth of communication between the individual superchips in the system," Varghese said. "Our optical diode may be a component in optical interconnect systems that could eliminate such a bottleneck."

Infrared light from a laser at telecommunication wavelength goes through an optical fiber and is guided by a microstructure called a waveguide. It then passes sequentially through two silicon rings and undergoes "nonlinear interaction" while inside the tiny rings. Depending on which ring the light enters first, it will either pass in the forward direction or be dissipated in the backward direction, making for one-way transmission. The rings can be tuned by heating them using a "microheater," which changes the wavelengths at which they transmit, making it possible to handle a broad frequency range.

The work was performed in laboratories operated by the Birck Nanotechnology Center in Purdue's Discovery Park and by the School of Electrical and Computer Engineering. It was funded by the U.S. Defense Threat Reduction Agency, Air Force Office of Scientific Research, National Science Foundation and the National Institutes of Health. Simulation work was carried out through the Network for Computational Nanotechnology (NCN), with resources available at www.nanohub.org.

Note to Journalists: A copy of the research paper is available by contacting the Science Press Package team at 202-326-6440, scipak@aaas.org

†To whom correspondence should be addressed. Email: mqi@purdue.edu

A passive optical diode effect would be useful for on-chip optical information processing, but has been difficult to achieve. Based on optical nonlinearity, we demonstrate a forward-backward transmission ratio up to 28 dB within telecommunication wavelengths using two 5-micrometer radius silicon rings. Our device is passive, yet maintains optical nonreciprocity for a broad range of input power levels and performs equally well even if the backward input power is higher than the forward input. The silicon optical diode is ultra compact and is compatible with current complementary metal-oxide-semiconductor (CMOS) processing.