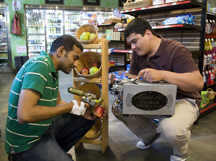 In the technology's first venture out of the lab, it successfully identified specific chemical residues on apples and oranges in a matter of minutes right in the produce section without having to peel or otherwise prepare a sample of the fruit.

R. Graham Cooks, the Henry Bohn Hass Distinguished Professor of Chemistry, and Zheng Ouyang, an assistant professor of biomedical engineering, led the team that used the miniature mass spectrometer - that some have likened to Star Trek's "tricorder" - to test for a fungicide on oranges and a scald inhibitor on apples.

"We're trying to take powerful, sophisticated instruments out of the lab and into the real environment where they could help monitor fresh produce all along the supply chain from production and supply to the consumers," said Cooks, who is co-founder of Purdue's Center for Analytical Instrumentation Development. "This technology has the capability of testing for bacteria as well, like E. coli or salmonella, and it only takes a matter of minutes as opposed to hours or even days for a standard laboratory test."

Mass spectrometry is a commonly used analysis method known for its sensitivity and accuracy; however, most available mass spectrometers require that a sample be specially prepared and placed in a vacuum chamber for analysis. Cooks and his team developed a technique, called ambient ionization, that allows critical steps to be performed in the air or directly on surfaces outside of a mass spectrometer. Molecules from the sample's surface are then vacuumed into the equipment for analysis.

"Accuracy is the price we pay for a much faster, cheaper and easier technology that can be taken out into the field almost anywhere," Cooks said. "The minis are not as precise as a standard mass spectrometer, but it would be a good first line defense to indicate when additional testing is necessary."

Fred Whitford, coordinator of the Purdue Pesticide Programs, said the ability to sample food quickly would be a great benefit to the regulation industry.

"Sometimes a test result comes too late and the food is already out, which can be a serious problem," Whitford said. "Currently only about 2 percent of the food is pulled and tested, and perhaps a faster and cheaper test would allow more samples to be taken."

"Chemicals can be misused in a variety of ways," he said. "Sometimes they are applied in the wrong amounts, sometimes the crop is harvested too soon after chemical application and sometimes a chemical is used that is not approved."

Graduate student Santosh Soparawalla and postdoctoral researcher Fatkhulla Tadjimukhamedov performed the grocery store field tests, which were limited to detecting the fungicide benzimidazole on oranges and the scald inhibitor diphenylamine on apples. Scald is a brown discoloration that appears on apples during storage.

"We could easily distinguish between treated produce, which had a strong signature for the chemicals, and organic produce, which showed no chemical residue on its surface," Soparawalla said. "This could be the first step toward a day when everyone will have the ability to make an informed decision of what they want to purchase and eat based on an analysis of the specific items."

In addition to the pilot test to validate the technology in the field, the team evaluated the quantities of diphenylamine, or DPA, present in a treated apple. The U.S. Environmental Protection Agency's limit for the concentration of DPA on an apple is 10 parts per million.

The team estimated a concentration of 15 parts per million of DPA was present on an apple, but the margin of error for the test is large enough that the concentration could easily be within the regulated limits, Soparawalla said.

"These tests of apples demonstrate how this technology could be a part of a larger regulatory system. The experiments were not a robust scientific examination of the levels of chemicals present on produce," Cooks said. "The test is what's called a factor of two test, meaning the actual concentration could be half or could be twice as much as the approximation. The results were not statistically above the legal limit, but it is food for thought."

The team also examined the distribution of the chemical in a cross section of the apple and found DPA throughout, with the greatest concentrations in the skin and near the core of the apple, Cooks said.

"It appears that washing or peeling an apple may not reduce one's exposure to the chemical much," Cooks said. "If the approximate levels held true, eating one apple a day would bring a person to the daily limit of exposure to diphenylamine."

The team found that benzimidazole was limited only to the skin of the orange.

The team tested two ambient ionization methods. Both involve ionizing molecules on a sample's surface. This ionization step gives charge to the molecules and allows them to be identified by the mass spectrometer.

In the first method, called paper spray ionization, a sample is wiped with a common lens wipe wet with alcohol. A small triangle is then cut from the wipe and placed on a special attachment of the miniature mass spectrometer where a high voltage is applied. The mixture of alcohol and residues from the sample's surface become fine droplets containing ionized molecules that pop off of the wipe and are vacuumed into the mass spectrometer for analysis.

This work was presented on Tuesday (June 7) at the American Society for Mass Spectrometry annual meeting in Denver. Funding from the National Science Foundation and Thermo Fisher Scientific supported this work.

Note to Journalists: Broadcast-quality B-Roll, sound bites and package are available for download and use from ftp://news69.uns.purdue.edu/Public/MassSpec/
For more information, contact Jim Schenke, Purdue News Service, 765-237-7296 or jschenke@purdue.edu

A video of the miniature mass spectrometer is available on YouTube at https://www.youtube.com/watch?v=o88FMyVvdMU