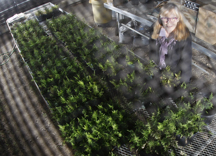 Jody Banks led the effort to sequence the genome of Selaginella, seen through a shade screen that allows it to be grown in greenhouses here. Selaginella is the first plant of its kind, a lycophyte, to have its genome sequenced. (Purdue Agricultural Communication photo/Tom Campbell)

WEST LAFAYETTE, Ind. - A Purdue University-led sequencing of the Selaginella moellendorffii (spikemoss) genome - the first for a non-seed vascular plant - is expected to give scientists a better understanding of how plants of all kinds evolved over the past 500 million years and could open new doors for the identification of new pharmaceuticals.

Jody Banks, a professor of botany and plant pathology, led a team of about 100 scientists from 11 countries to sequence the genome of Selaginella, a lycophyte. Lycophytes, which are the oldest living vascular plants, shed spores to reproduce and have a single vascular vein through their leaves, as opposed to more complex vascular plants.

"There are only three families and about 1,000 species of lycophytes remaining. Selaginella has been on Earth about 200 million years," said Banks, whose findings were published Thursday (May 5) in the journal Science. "This plant is a survivor. It has a really long history and it hasn't really changed much over time. When you burn coal, you're burning the Carboniferous relatives of these plants."

Banks said the Selaginella genome, with about 22,300 genes, is relatively small. Scientists also discovered that Selaginella is the only known plant not to have experienced a polyploidy event, in which it creates one or more extra sets of chromosomes.

Selaginella also is missing genes known in other plants to control flowering, phase changes from juvenile plants to adults and other functions.

"It does these in a totally unknown way," Banks said.

Banks said Selaginella's genome would help scientists understand how its genes give the plant some of its unique characteristics. The genome also will help them understand how Selaginella and other plants are evolutionarily connected.

"For many plant genes, we have no idea what their function is," Banks said. "Knowing this gives us ideas. It's an important piece of the puzzle in understanding how plants evolved."

Banks also noted that Selaginella and Arabidopsis thaliana, a plant widely used in research, use significantly different genes to control creation of secondary metabolites, molecules that are responsible for creating scents, seed dispersal functions, defense and other tasks. Those secondary metabolites also are used to create pharmaceuticals.

"These metabolic genes evolved independently in Selaginella and flowering plants, so the metabolites they make are likely to be very different," Banks said. "This means Selaginella could be a huge resource for new pharmaceuticals."

Banks said the genome sequence would now be mined for more information as scientists learn more about plant evolution and applications for Selaginella's genes.

The National Science Foundation, the National Institutes of Health and several international organizations funded the research. The Joint Genome Institute of the U.S. Department of Energy sequenced the genome.

Vascular plants appeared ~410 million years ago then diverged into several lineages of which only two survive: the euphyllophytes (ferns and seed plants) and lycophytes (1). We report here the genome sequence of the lycophyte Selaginella moellendorffii (Selaginella), the first non-seed vascular plant genome reported. By comparing gene content in evolutionary diverse taxa, we found that the transition from a gametophyte-to-sporophyte-dominated life cycle required far fewer new genes than the transition from a non-seed vascular to a flowering plant, while secondary metabolic genes expanded extensively and in parallel in the lycophyte and angiosperm lineages. Selaginella differs in post-transcriptional gene regulation, including small RNA regulation of repetitive elements, an absence of the tasiRNA pathway and extensive RNA editing or organellar genes.