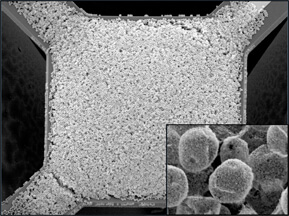 This image shows a new type of sensor for an advanced breath-analysis technology that rapidly diagnoses patients by detecting "biomarkers" in a person's respiration in real time. Researchers used a template made of micron-size polymer particles and coated them with much smaller metal oxide nanoparticles. Using nanoparticle-coated microparticles instead of a flat surface allows researchers to increase the porosity of the sensor films, increasing the "active sensing surface area" to improve sensitivity. (Purdue University and NIST)

The researchers demonstrated their approach is capable of rapidly detecting biomarkers in the parts per billion to parts per million range, at least 100 times better than previous breath-analysis technologies, said Carlos Martinez, an assistant professor of materials engineering at Purdue who is working with researchers at the National Institute of Standards and Technology.

"People have been working in this area for about 30 years but have not been able to detect low enough concentrations in real time," he said. "We solved that problem with the materials we developed, and we are now focusing on how to be very specific, how to distinguish particular biomarkers."

The technology works by detecting changes in electrical resistance or conductance as gases pass over sensors built on top of "microhotplates," tiny heating devices on electronic chips. Detecting biomarkers provides a record of a patient's health profile, indicating the possible presence of cancer and other diseases.

"We are talking about creating an inexpensive, rapid way of collecting diagnostic information about a patient," Martinez said. "It might say, 'there is a certain percentage that you are metabolizing a specific compound indicative of this type of cancer,' and then additional, more complex tests could be conducted to confirm the diagnosis."

The researchers used the technology to detect acetone, a biomarker for diabetes, with a sensitivity in the parts per billion range in a gas mimicking a person's breath.

Findings were detailed in a research paper that appeared earlier this year in the IEEE Sensors Journal, published by the Institute of Electrical and Electronics Engineers' IEEE Sensors Council. The paper was co-authored by Martinez and NIST researchers Steve Semancik, lead author Kurt D. Benkstein, Baranidharan Raman and Christopher B. Montgomery.

The researchers used a template made of micron-size polymer particles and coated them with far smaller metal oxide nanoparticles. Using nanoparticle-coated microparticles instead of a flat surface allows researchers to increase the porosity of the sensor films, increasing the "active sensing surface area" to improve sensitivity.

A droplet of the nanoparticle-coated polymer microparticles was deposited on each microhotplate, which are about 100 microns square and contain electrodes shaped like meshing fingers. The droplet dries and then the electrodes are heated up, burning off the polymer and leaving a porous metal-oxide film, creating a sensor.

"It's very porous and very sensitive," Martinez said. "We showed that this can work in real time, using a simulated breath into the device."

Gases passing over the device permeate the film and change its electrical properties depending on the particular biomarkers contained in the gas.

Such breathalyzers are likely a decade or longer away from being realized, in part because precise standards have not yet been developed to manufacture devices based on the approach, Martinez said.

"However, the fact that we were able to do this in real time is a big step in the right direction," he said.

We evaluated a microelectromechanical systems (MEMS) microsensor array with temperature-controlled chemi-resistive elements for use as a noninvasive clinical diagnostic tool to detect the presence or absence of trace amounts of disease biomarkers in simulated breath samples. The microsensor environment was periodically altered between air (78% N2, 21% O2 by volume, 20% relative humidity) and simulated breath (77% N2, 16% O2, 4% CO2 by volume, 80% relative humidity) samples creating a dynamic background. Acetone, a disease marker for diabetes, was spiked into select simulated breath samples at relevant concentrations (0.5 �mol/mol to 8�mol/mol) to pose a diagnostic problem for the sensor array. Using standard statistical dimensionality reduction and classfication algorithms, we compared the ability of a variety of sensing materials to detect and recognize the disease marker. Our analyses indicate that the porous, doped nanoparticle materials (Sb:SnO microshell films and Nb:TiOnanoparticle films) are best for the recognition problem (acetone present versus absent), but that WO and SnO ?lms are better at the quanti?cation task (high versus low concentrations of acetone).