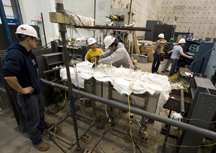 WEST LAFAYETTE, Ind. - Researchers at Purdue University are studying the effects of fire on steel structures, such as buildings and bridges, using a one-of-a-kind heating system and a specialized laboratory for testing large beams and other components.

Building fires may reach temperatures of 1,000 degrees Celsius, or more than 1,800 degrees Fahrenheit, said Amit Varma, a Purdue associate professor of civil engineering who is leading the work.

"At that temperature, exposed steel would take about 25 minutes to lose about 60 percent of its strength and stiffness," he said. "As you keep increasing the temperature of the steel, it becomes softer and weaker."

One project focuses on how a building's steel-and-concrete floor and its connections to the building behave in a fire. Another project concentrates on how fire affects steel columns and a building's frame.

Such testing is customarily conducted inside large furnaces.

"However, in a furnace it is very difficult to heat a specimen while simultaneously applying loads onto the structure to simulate the forces exerted during a building's everyday use," Varma said.

To overcome this limitation, Purdue researchers designed a system made up of heating panels to simulate fire. The panels have electrical coils, like giant toaster ovens, and are placed close to the surface of the specimens. As the system is used to simulate fire, test structures are subjected to forces with hydraulic equipment.

In practice, beams and other steel components in buildings are covered with fireproofing materials to resist the effects of extreme heating.

"Because the steel in buildings is coated with a fireproofing material, the air might be at 1,000 degrees but the steel will be at 300 or 400 degrees," Varma said. "We conduct tests with and without fire protection."

The work is funded by the National Science Foundation and the U.S. Department of Commerce's National Institute of Standards and Technology.

The heating system is being used to test full-scale steel columns at Purdue's Robert L. and Terry L. Bowen Laboratory for Large-Scale Civil Engineering Research. It is believed to be the only such heating system in the world, Varma said.

Each panel is about 4 feet square, and the system contains 25 panels that cover 100 square feet. Having separate panels enables researchers to heat certain portions of specimens, recreating "the heating and cooling path of a fire event," Varma said.

The Bowen Lab is one of a handful of facilities where testing can be performed on full-scale structures to yield more accurate data. The 66,000-square-foot laboratory is equipped with special hydraulic testing equipment and powerful overhead cranes.

The research group also has tested 10-foot-by-10-foot "composite floor systems" - made of steel beams supporting a concrete slab - inside a furnace operated by Michigan State University. The composite design is the most common type of floor system used in steel structures.

Findings from that research will be compared with floor-system testing to be conducted at the Bowen Lab. Results from both experiments will be used to test and verify computational models used to design buildings.

"Most of these experiments are showing that we have good models, and we are using data to benchmark the models and make sure the theory and experiment agree with each other," Varma said.

Models are needed to design composite floor systems, which can be heavily damaged by fire.

Recent research findings were detailed in a paper presented in June during the Structures in Fire conference at Michigan State University. The paper was written by graduate student Lisa Choe and Varma.

Note to Journalists: Broadcast-quality B-roll and sound bites are available for download and use at ftp://news69.uns.purdue.edu/Public/VarmaFireBeam. For more information, contact Jim Schenke, Purdue News Service, at 765-237-7296, jschenke@purdue.edu

Experiments are being conducted to determine the fundamental behavior of steel columns. Column and beam-column specimens are being tested by subjecting them to combined mechanical and thermal loading. The experimental approaches involve the use of: (a) an innovative radiant heating and control equipment to apply thermal loading instead of using a conventional furnace and (b) a digital image processing technique incorporated with close-range photogrammetry to measure the deformation and curvature over the heated region. Also, a unique self-reacting test frame was designed by the authors to conduct the column experiments. The measured axial force-moment-curvature-temperature (P-M-Φ-T), axial force-displacement-temperature (P-Δ-T), and axial force-end rotation-temperature (P-θ-T) responses of steel columns were compared with those obtained by 3-D finite element analyses.