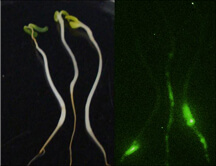 Both images show plants grown in an agar substrate with a bioluminescent E. coli, which emits light when active. The E. coli associated with the roots are glowing (right) when viewed in the dark. (Photo provided by Bruce Applegate)

WEST LAFAYETTE, Ind. - E. coli can live for weeks around the roots of produce plants and transfer to the edible portions, but the threat can be minimized if growers don't harvest too soon, a Purdue University study shows.

Purdue scientists added E. coli to soil through manure application and water treated with manure and showed that the bacteria can survive and are active in the rhizosphere, or the area around the plant roots, of lettuce and radishes. E. coli eventually gets onto the aboveground surfaces of the plants, where it can live for several weeks. Activity in the rhizosphere was observed using a bioluminescent E. coli created by Bruce Applegate that glows when active. Applegate, a co-author on the project, is an associate professor in the food science and biological sciences departments at Purdue.

"E. coli is actually quite active in the rhizosphere. They're eating something there - probably plant exudates," said Ron Turco, a professor of agronomy and co-author of the study published in the November issue of the Journal of Food Protection.

Turco said the E. coli didn't survive on the plants' surfaces more than 40 days after seeds were planted. Harvesting produce at least 40 days after planting should reduce the possibility of contamination, but he warned that E. coli could still come from other sources.

"In actual field application, you pick up other things that are all around," Turco said. "You don't just get the plants that are 40 days old. An animal getting loose in a field could also contaminate plants."

Mussie Habteselassie, Turco's former postdoctoral researcher and now an assistant professor of soil microbiology at the University of Georgia's Griffin campus, said harvesting practices in manure-treated fields can be critical for produce crops.

"If you harvest young and old plants together or mix them after harvesting, there is risk of contamination of the older plants," Habteselassie said. "If plants are uprooted during harvest, there is also a possibility of contamination from E. coli living in the rhizosphere."

Turco said he would continue studying E. coli's ability to survive in different situations, including in water and processed produce. The U.S. Department of Agriculture funded the research.

To better protect consumers from exposure to produce contaminated with Escherichia coli, the potential transfer of E. coli from manure or irrigation water to plants must be better understood. We used E. coli strains expressing bioluminescence (E. coli O157:H7 lux) or multiantibiotic resistance (E. coli2+) in this study. These marked strains enabled us to visualize in situ rhizosphere colonization and metabolic activity and to track the occurrence and survival of E. coli in soil, rhizosphere, and phyllosphere. When radish and lettuce seeds were treated with E. coli O157:H7 lux and grown in an agar-based growth system, rapid bacterial colonization of the germinating seedlings and high levels of microbial activity were seen. Introduction of E. coli2+ to soil via manure or via manure in irrigation water showed that E. coli could establish itself in the lettuce rhizosphere. Regardless of introduction method, 15 days subsequent to its establishment in the rhizosphere, E. coli2+ was detected on the phyllosphere of lettuce at an average number of 2.5 log CFU/g. When E. coli2+ was introduced 17 and 32 days postseeding to untreated soil (rather than the plant surface) via irrigation, it was detected at low levels (1.4 log CFU/g) on the lettuce phyllosphere 10 days later. While E. coli2+ persisted in the bulk and rhizosphere soil throughout the study period (day 41), it was not detected on the external portions of the phyllosphere after 27 days. Overall, we find that E. coli is mobile in the plant system and responds to the rhizosphere like other bacteria.