A website that will present more than 30,000 hours of underwater videos from the failed Deepwater Horizon oil platform has been created by Purdue University. The site, oilSpillHub.org, will allow the public to view the raw video, as well as provide tools for researchers. Steven Wereley, a Purdue mechanical engineering professor, is leading the effort to create the online resource for scientists, engineers and members of the general public who are interested learning more about the event. (Purdue University image)

WEST LAFAYETTE, Ind. - More than 30,000 hours of underwater videos of the failed Deepwater Horizon oil drill platform in the Gulf of Mexico are being released on a new website designed to examine the scientific and engineering issues surrounding the largest environmental disaster in U.S. history.

The site, which is being built by Purdue University, is available at https://www.oilspillHUB.org

The video archive is part of a science gateway hub under development at Purdue that will provide resources for researchers and educators, such as modeling tools, presentations and computational support.

"OilspillHUB.org is designed to be a resource for the general public, scientists and engineers, and will provide connections to Facebook and Twitter and also allow videos to be viewed on mobile devices," says Steve Wereley, a professor of mechanical engineering. Wereley, who gained national attention for his calculations on the flow rate of the blowout, will be the lead researcher on oilspillHUB.

"The videos on the site are much clearer and sharper images than have been seen before, and the entire time record of the event - 88 days - will eventually be available for researchers to study," he said. "We'll be adding additional tools for researchers, but the videos themselves are quite interesting to view. The site includes videos shot before May 20, which have only been seen by BP and Coast Guard staff."

The videos were shot by 14 remotely operated underwater vehicles. The video feed of oil gushing from the blowout more than a mile deep in the Gulf of Mexico has become the iconic image of the disaster. But Wereley says the videos offer much more than a cursory view of the spill. 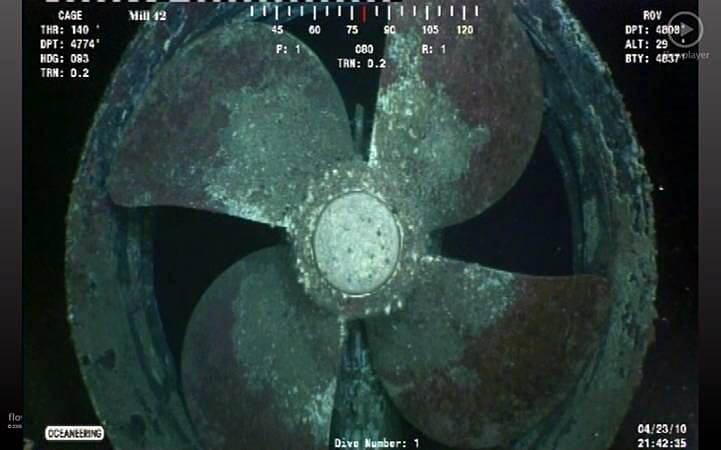 An underwater video from the Deepwater Horizon oil platform shows a stationary screw from the facility. Purdue will release more than 30,000 hours of the videos, many of which were previously unseen by anyone other than staff members of BP or the U.S. Coast Guard. The videos are available at the website OilSpillHub.org. (Purdue University image)

"Researchers can use tools we are developing, such as photogrammetry tools, to learn much more about what happened and what we can do to stop it if this were to occur again," he said. "These tools will allow us to conduct empirical investigations into the event. Users of the hub will even be able to submit their own tools and materials for distribution on the hub."

The videos are being provided to Purdue by the U.S. Senate Committee on Environment and Public Works, which is chaired by Sen. Barbara Boxer, D-Calif., and by Chairman Edward J. Markey, D-Mass., of the Select Committee on Energy Independence and Global Warming and the Energy and Environment Subcommittee in the House Energy and Commerce Committee.

"This video archive will preserve the tragedy of this spill and turn it into a positive educational tool for professors and the public. These videos, which were available as part of the investigative work of Congress, are an important asset to scientists, engineers, educators and anyone who hopes to have a better understanding of the environmental disaster," Markey said. "These videos become an important resource for both researchers working to develop solutions to future events and for members of the public who hope to have a better understanding of what happened."

To date there have been approximately 30,000 hours of video archived from the underwater cameras.

"These videos will be important for scientists and engineers for the next 20 years," Wereley said. "This site will be a clearinghouse for researchers to find videos and other materials to help us all understand what is happening and what has happened in the course of this disaster." 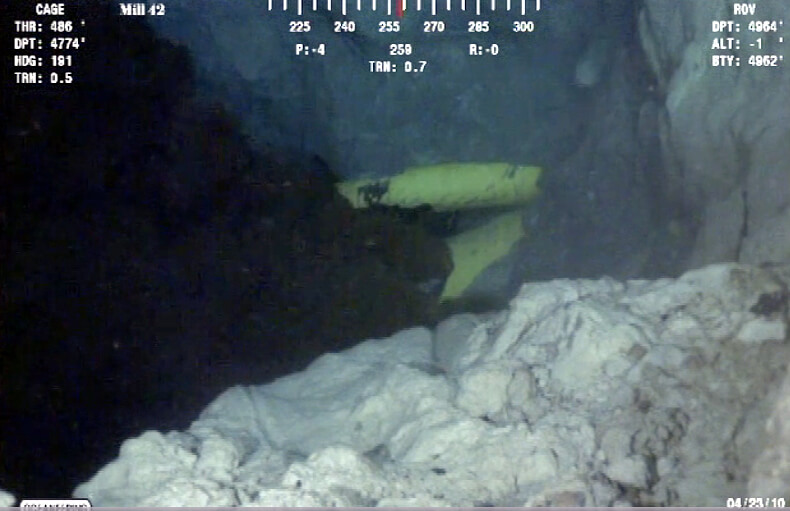 This image from a video not previously released to the public is from April 23, three days after the explosion on the Deepwater Horizon oil platform. The video is one of thousands of hours of underwater videos available at www.OilSpillHub.org, a new website developed by Purdue University. (Purdue University image)

"So far the HubZero consortium, which is based at Purdue, has developed more than 20 of these hubs, with more coming online regularly," McCartney said. "There are hubs that focus on pharmaceuticals, nano-electronics, earthquakes, cancer research, advanced manufacturing and many other topics."

A list of topics addressed by the hubs can be found at https://hubzero.org/sites

The video site for OilSpillHub.org was developed by Purdue's informatics team, which develops online tools to support learning and scientific discovery, including the nationally acclaimed classroom technologies HotSeat and Mixable.