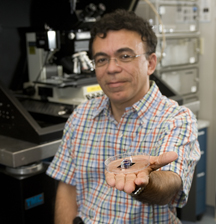 Babak Ziaie, a Purdue professor of electrical and computer engineering and biomedical engineering, shows a new type of pump for drug-delivery patches that might use arrays of "microneedles" to deliver a wider range of medications than now possible with conventional patches. (Purdue University photo/Mark Simons)

WEST LAFAYETTE, Ind. - Purdue University researchers have developed a new type of pump for drug-delivery patches that might use arrays of "microneedles" to deliver a wider range of medications than now possible with conventional patches.

The current "transdermal" patches are limited to delivering drugs that, like nicotine, are made of small hydrophobic molecules that can be absorbed through the skin, said Babak Ziaie, a professor of electrical and computer engineering and biomedical engineering.

"There are only a handful of drugs that currently can be administered with patches," he said. "Most new drugs are large molecules that won't go through the skin. And a lot of drugs, such as those for treating cancer and autoimmune disorders, you can't take orally because they aren't absorbed into the blood system through the digestive tract."

Patches that used arrays of tiny microneedles could deliver a multitude of drugs, and the needles do not cause pain because they barely penetrate the skin, he said.

"It's like a bandage - you would use it and discard," Ziaie said.

The patches require a pump to push the drugs through the narrow needles, which have a diameter of about 20 microns, or roughly one-fourth as wide as a human hair. However, pumps on the market are too complex for patches, he said.

"We have developed a simple pump that's activated by touch from the heat of your finger and requires no battery," Ziaie said.

The pump contains a liquid that boils at body temperature so that the heat from a finger's touch causes it to rapidly turn to a vapor, exerting enough pressure to force drugs through the microneedles. 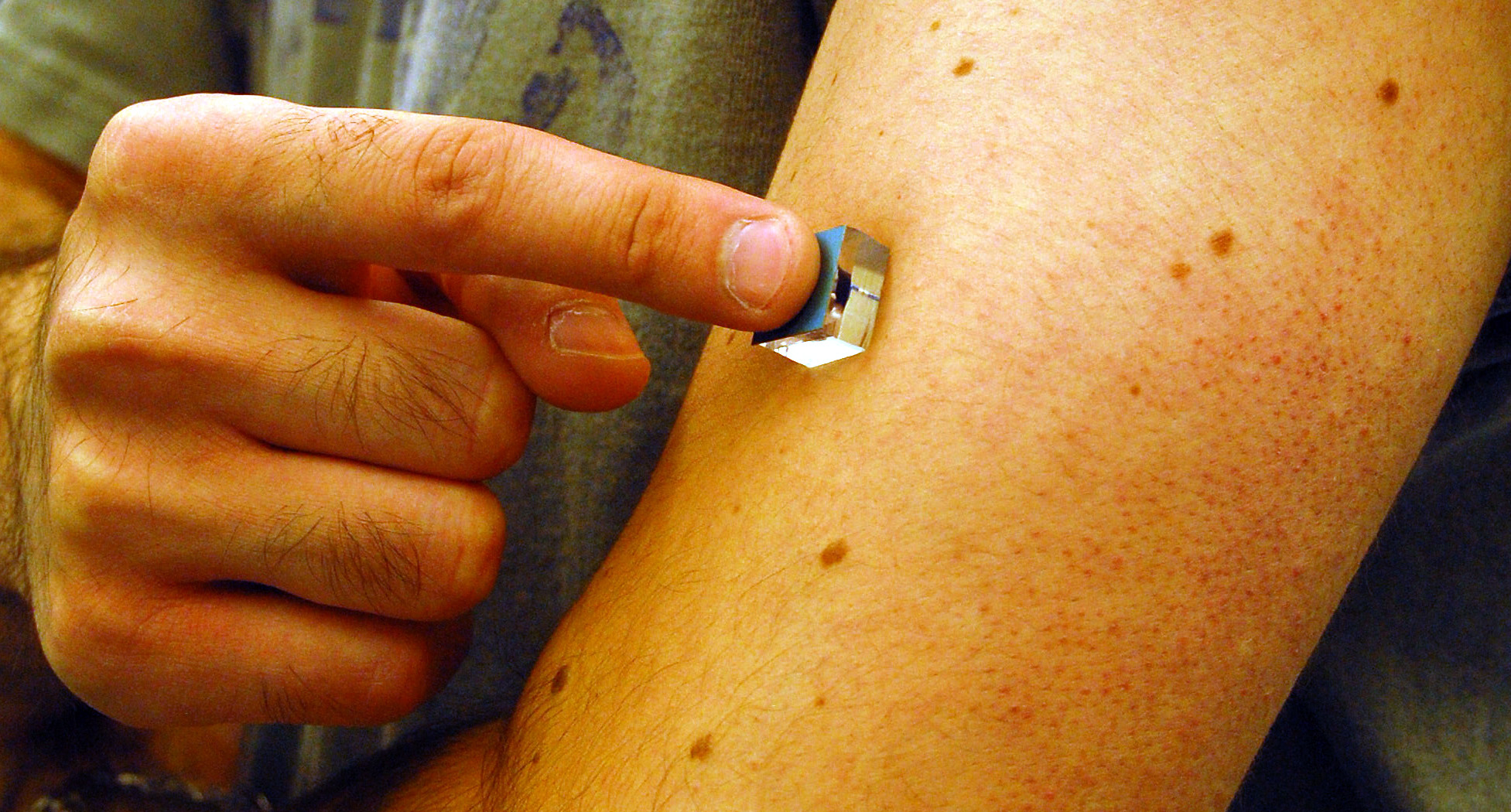 Purdue doctoral student Charilaos Mousoulis demonstrates a prototype pump for drug-delivery patches that might use arrays of microneedles to deliver a wider range of medications than now possible with conventional patches. (Purdue University photo/Birck Nanotechnology Center)

The liquid is contained in a pouch separated from the drug by a thin membrane made of a rubberlike polymer, called polydimethylsiloxane, which is used as diaphragms in pumps.

Research findings are detailed in a paper being presented during the 14th International Conference on Miniaturized Systems for Chemistry and Life Sciences on Oct. 3-7 at University of Groningen in The Netherlands. The paper was written by electrical and computer engineering doctoral students Charilaos Mousoulis and Manuel Ochoa and Ziaie.

Researchers have filed an application for a provisional patent on the device.

Ziaie has tested prototypes with liquids called fluorocarbons, which are used as refrigerants and also in semiconductor manufacturing.

"You need a relatively large force, a few pounds per square inch, to push medications through the microneedles and into the skin," Ziaie said. "It's very difficult to find a miniature pump that can provide that much force."

The work has been supported with funding from the National Science Foundation. Future research may include work to try the pump with microneedles.

In this paper, a skin-contact-actuated dispenser/pump is described. The dispenser consists of stacked PDMS layers mounted on a silicon substrate and operates based on the evaporation and condensation of a low boiling point liquid. Therefore, there is no need for a heater or a battery, since the only required source of energy is the heat provided by skin contact. A prototype device with overall dimensions of 14mm�14 mm�8mm is fabricated and characterized. For a per-fluoro compound working fluid (3MTM FC-3284), a flow rate of 60μL/min and a maximum back pressure of 4.19 psi is measured.