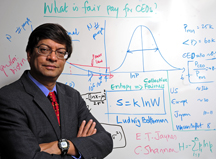 Venkat Venkatasubramanian, a Purdue professor of chemical engineering, displays some of the mathematics behind his new theory, "statistical teleodynamics," to show how free markets for labor promote fair salaries for workers and not the CEO compensation practices common today. (Purdue News Service file photo/Andrew Hancock)

The research presents a new perspective on 18th century economist Adam Smith's concept that an "invisible hand" drives a free market economy to a collective good.

"It is generally believed that the free market cares only about efficiency and not fairness. However, my theory shows that even though companies focus primarily on making profits and individuals are only looking out for themselves, the collective self-organizing free market dynamics, under ideal conditions, leads to fairness as an emergent property," said Venkat Venkatasubramanian, a professor of chemical engineering. "In reality, the self-correcting free market mechanisms have broken down for CEOs and other top executives in the market, but they seem to be working fine for the remaining 95 percent of employees."

Venkatasubramanian is proposing the use of statistical mechanics and econophysics concepts to gain some insights into the problem.

"This is at the intersection of physics and economics," he said. "We are generalizing concepts from statistical thermodynamics - the branch of physics that describes the behavior of gases, liquids and solids under heat - to analyze how free markets should perform ideally."

In previous work, Venkatasubramanian used the approach to determine that the 2008 salaries of the top 35 CEOs in the United States were about 129 times their ideal fair salaries - and CEOs in the Standard & Poor's 500 averaged about 50 times their fair pay - raising questions about the effectiveness of the free market to properly determine CEO pay.

In the new work, the researcher has determined that fairness is integral to a normally functioning free market economy.

Findings are detailed in a research paper that appeared in June in the online journal Entropy and is available at https://www.mdpi.com/1099-4300/12/6/1514/

A key idea in Venkatasubramanian's theory is a new interpretation of entropy, used in science to measure disorder in thermodynamics and uncertainty in information theory. He shows, however, that entropy also is a measure of fairness, an insight that seems to have been largely missed over the years, he said.

"Venkat's insight goes beyond the simple grafting of the mathematics of information theory and statistical physics onto the question of fairness of salary distributions within a free market economy," said Andrew Hirsch, a Purdue physics professor familiar with the research. "He has recast the notion of entropy into a context that has meaning and relevance for this particular problem."

"In statistical thermodynamics, we study the movement of large numbers of molecules," Venkatasubramanian said. "In economic systems, we have a large number of people moving around in a free market system, but instead of thermal energy driving the movement people are motivated by goals."

His theory describes how goal-driven "rational agents," or people, will behave in a free market economic environment under ideal conditions.

"The bottom line is that the free market does care about fairness," he said. "Clearly, the next step is to conduct more comprehensive studies of salary distributions in various organizations and sectors in order to understand in greater detail the deviations in the real world from the ideal, fairness maximizing, free market for labor."

The excessive compensation packages of CEOs of U.S. corporations in recent years have brought the issue of fairness to the foreground in economics. The conventional wisdom is that the free market for labor, which determines the pay packages, cares only about efficiency and not fairness. We present an alternative theory that shows that an ideal free market environment also promotes fairness as an emergent property resulting from the self-organizing market dynamics. Even though an individual employee may care only about his or her salary and no one else's, the collective actions of all the employees, combined with the profit maximizing actions of all the companies, in a free market environment under budgetary constraints, lead towards, guided by Adam Smith's invisible hand of self-organization, a more fair allocation of wages. By exploring deep connections with statistical thermodynamics, we show that entropy is the appropriate measure of fairness in a free market environment which is maximized at equilibrium to yield the lognormal distribution of salaries as the fairest inequality of pay in an organization under ideal conditions.