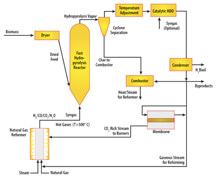 This diagram shows the layout for a new method for processing agricultural waste and any available biomass into biofuels. Researchers at Purdue University are proposing the creation of mobile processing plants that would rove the Midwest to produce the fuels using the technique, called fast-hydropyrolysis-hydrodeoxygenation. Biomass along with hydrogen will be fed into a high-pressure reactor and subjected to extremely fast heating, rising to as hot as 900 degrees Fahrenheit in less than a second. (Rakesh Agrawal, Purdue University School of Chemical Engineering)

WEST LAFAYETTE, Ind. - Chemical engineers at Purdue University have developed a new method to process agricultural waste and other biomass into biofuels, and they are proposing the creation of mobile processing plants that would rove the Midwest to produce the fuels.

The approach sidesteps a fundamental economic hurdle in biofuels: Transporting biomass is expensive because of its bulk volume, whereas liquid fuel from biomass is far more economical to transport, he said.

"Material like corn stover and wood chips has low energy density," Agrawal said. "It makes more sense to process biomass into liquid fuel with a mobile platform and then take this fuel to a central refinery for further processing before using it in internal combustion engines."

The new method, called fast-hydropyrolysis-hydrodeoxygenation, works by adding hydrogen into the biomass-processing reactor. The hydrogen for the mobile plants would be derived from natural gas or the biomass itself. However, Agrawal envisions the future use of solar power to produce the hydrogen by splitting water, making the new technology entirely renewable.

The method, which has the shortened moniker of H2Bioil -- pronounced H Two Bio Oil -- has been studied extensively through modeling, and experiments are under way at Purdue to validate the concept.

Agrawal, Ribeiro and Delgass are developing reactors and catalysts to experimentally demonstrate the concept. Another paper by Agrawal and Singh addressing various biofuels processes, including fast-hydropyrolysis-hydrodeoxygenation, also appeared in June in the Annual Review of Chemical and Biomolecular Engineering. This paper can be accessed online at https://arjournals.annualreviews.org/eprint/gmGjKYuY7iQexh8Dd7XT/full/10.1146/annurev-chembioeng-073009-100955

The Environmental Science & Technology paper outlines the process, showing how a portion of the biomass is used as a source of hydrogen to convert the remaining biomass to liquid fuel.

"Another major thrust of this research is to provide guidelines on the potential liquid-fuel yield from various self-contained processes and augmented processes, where part of the energy comes from non-biomass sources such as solar energy and fossil fuel such as natural gas," said Singh, who is now a researcher working at Bayer CropScience.

Biomass along with hydrogen will be fed into a high-pressure reactor and subjected to extremely fast heating, rising to as hot as 500 degrees Celsius, or more than 900 degrees Fahrenheit in less than a second. The hydrogen containing gas is to be produced by "reforming" natural gas, with the hot exhaust directly fed into the biomass reactor.

"The biomass will break down into smaller molecules in the presence of hot hydrogen and suitable catalysts," Agrawal said.  "The reaction products will then be subsequently condensed into liquid oil for eventual use as fuel. The uncondensed light gases such as methane, carbon monoxide, hydrogen and carbon dioxide, are separated and recycled back to the biomass reactor and the reformer."

Purdue has filed a patent application on the method.

The general concept of combining biomass and carbon-free hydrogen to increase the liquid fuel yield has been pioneered at Purdue. The researchers previously invented an approach called a "hybrid hydrogen-carbon process," or H2CAR. A news release describing the process is at https://www.purdue.edu/uns/x/2007a/070314AgrawalBiomass.html

Both H2CAR and H2Bioil use additional hydrogen to boost the liquid-fuel yield. However, H2Bioil is more economical and mobile than H2CAR, Singh said.

"It requires less hydrogen, making it more economical," he said. "It is also less capital intensive than conventional processes and can be built on a smaller scale, which is one of the prerequisites for the conversion of the low-energy density biomass to liquid fuel. So H2Bioil offers a solution for the interim time period, when crude oil prices might be higher but natural gas and biomass to supply hydrogen to the H2Bioil process might be economically competitive."

The research was funded by the U.S. Department of Energy, the National Science Foundation and the U.S. Air Force Office of Scientific Research, and is affiliated with the Energy Center at Purdue's Discovery Park.

We have estimated sun-to-fuel yields for the cases when dedicated fuel crops are grown and harvested to produce liquid fuel. The stand-alone biomass to liquid fuel processes, that use biomass as the main source of energy, are estimated to produce one-and-one-half to three times less sun-to-fuel yield than the augmented processes. In an augmented process, solar energy from a fraction of the available land area is used to produce other forms of energy such as H2, heat etc., which are then used to increase biomass carbon recovery in the conversion process. However, even at the highest biomass growth rate of 6.25 kg/m2�y considered in this study, the much improved augmented processes are estimated to have sun-to-fuel yield of about 2%. We also propose a novel standalone H2Bioil-B process, where a portion of the biomass is gasified to provide H2 for the fast-hydropyrolysis/hydrodeoxygenation of the remaining biomass. This process is estimated to be able to produce 125-146 ethanol gallon equivalents (ege)/ton of biomass of high energy density oil but needs experimental development. The augmented version of fast-hydropyrolysis/hydrodeoxygenation, where H2 is generated from a nonbiomass energy source, is estimated to provide liquid fuel yields as high as 215 ege/ton of biomass. These estimated yields provide reasonable targets for the development of efficient biomass conversion processes to provide liquid fuel for a sustainable transport sector.