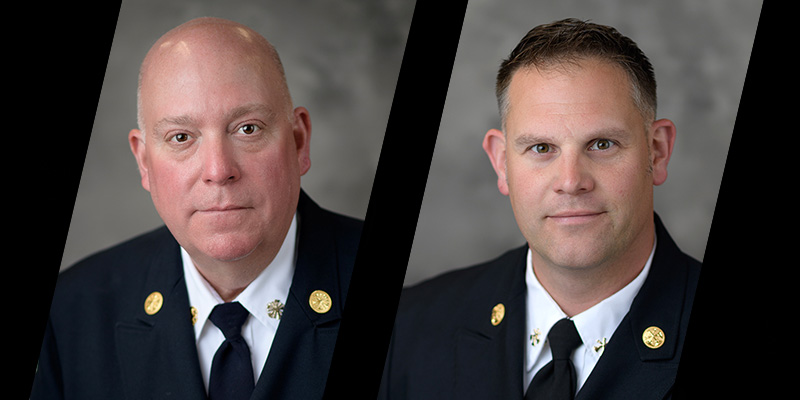 West Lafayette, Ind. – Purdue University announced Friday (Dec. 9) the retirement of Fire Chief Kevin Ply. Ply has been a member of PUFD since 1989 and has led the department since his appointment as chief in 2007.

Also announced Friday, succeeding Ply as chief of PUFD will be Brad Anderson, currently the assistant chief of PUFD. Anderson has been with PUFD since 2006 and has held a variety of positions in his time with the department.

“It’s always hard when a dedicated, giving leader like Chief Ply decides to retire,” said Jay Wasson, vice president and chief public safety officer. “With over 30 years of service to Purdue, Chief Ply has seen this campus and community through both tragedies and celebrations, and we are honored he chose to dedicate so many years to Purdue.”

A Change of Command Ceremony will be held 11 a.m. to noon Wednesday (Dec. 14) in the Feature Gym of the Córdova Recreational Sports Center.

“The Change of Command Ceremony will be doubly noteworthy as we both celebrate the legacy of Chief Ply and the opportunity before Assistant Chief Anderson,” Wasson said. “We welcome those who would like to show their appreciation and support for our exiting and incoming fire chiefs.” 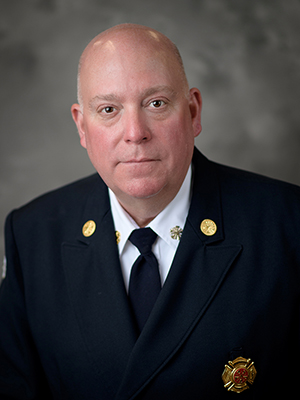 Ply began his career in public safety as a firefighter and emergency medical technician (EMT) in 1983 with the Washington Township Volunteer Fire Department. In his time with Purdue, Ply has held the positions of firefighter/EMT from 1989-2001, lieutenant from 2001-2003, captain from 2003-2004 and deputy fire chief from 2004-2007. Ply holds numerous certifications as an EMT, hazardous materials technician, airport firefighter and fire instructor.

During his time in PUFD, Ply created a fire inspection division, strengthened training and certification requirements for fire department personnel and expanded the department’s emergency medical services (EMS) program by becoming a certified Indiana EMS training institution. Ply has been a strong advocate for campus fire safety, contributing content to national campus fire safety programs, and has actively supported the Shop with a Firefighter program for numerous years. A past president and current member of the Board of Directors for the Indiana Fire Chiefs Association, Ply was honored as the 2010 Indiana Fire Chief of the Year for his work with campus fire safety initiatives. Ply’s retirement is effective Dec. 31. 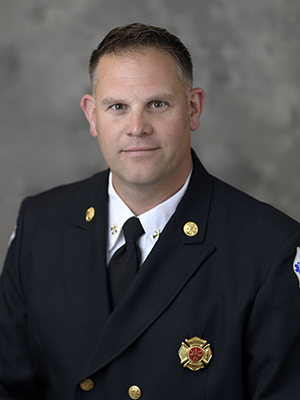 Anderson has a Bachelor of Science degree in criminal justice and criminology and a Master of Business Administration. With over 20 years of experience in fire and emergency medical services, he began his career as an EMT/paramedic with the Tippecanoe Emergency Ambulance Service, where he worked for 14 years. During that time, Anderson also worked for two years with the Crawfordsville Fire Department. He joined Purdue in 2006, and during his time with the university he also completed 10 years of service with the United States Coast Guard Reserve. In his time at Purdue, Anderson has served as captain and assistant chief. Also an active community member, Anderson participates in the Tippecanoe County Volunteer Fire Service, Randolph Township Volunteer Fire Service, Greater Lafayette Honor Flight and Tippecanoe School Corporation Board of School Trustees. Anderson’s appointment as fire chief is effective Dec. 19.

As chief of the Purdue fire department, Anderson will be part of a public safety leadership team responsible for the reliable delivery of public safety services to the Purdue University community. His responsibilities include leading and managing the department in fire response, emergency medical services, hazardous material response, airport rescue firefighting, code compliance and fire equipment services. He will serve as the community outreach and public representative for the fire department.

“Assistant Chief Anderson comes to the role of chief with the support of his department, peers and community partners,” Wasson said. “His public safety and military experience along with his extensive local community involvement position him well for this leadership role.”