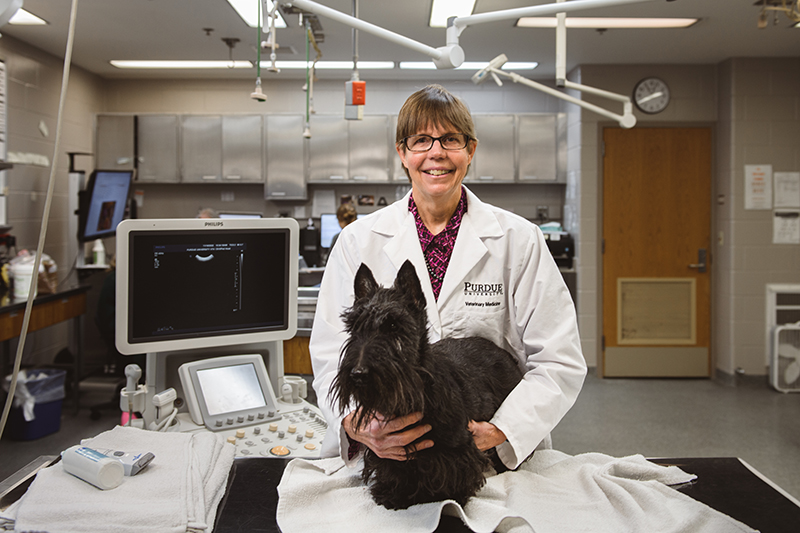 WEST LAFAYETTE, Ind. – Cancer strikes without warning. Genetics can explain some of it, as well as environmental and lifestyle conditions. But there is no surefire way to predict who will develop cancer. That tragedy holds true for both humans and their closest domestic companions: dogs.

A canine cancer scientist at Purdue University’s College of Veterinary Medicine is working to take the first steps to make a serious form of cancer in dogs — one with analogues to human health — easier to detect and treat before it has become more advanced.

Scottish terriers, famous for being presidential pets to presidents George W. Bush and Franklin D. Roosevelt, “Jock” in Disney’s “Lady and the Tramp,” and the cutest Monopoly game token, are also famous for a less cheerful reason: They get bladder cancer at rates 20 times that of other dog breeds. And when Scotties and other dogs develop bladder cancer, it is often an aggressive form similar to muscle invasive bladder cancer in humans.

“For many types of cancer in dogs or in humans, the cancer is diagnosed ‘late’ when it is already progressing and causing harm. The early stages of cancer, such as bladder cancer, may not produce any symptoms, and, therefore, the cancer goes unnoticed. And when symptoms do develop, they resemble those of a urinary tract infection, often prompting treatment with antibiotics for a while,” Knapp said. “When it becomes apparent that something more is going on and we see the dogs in the oncology clinic, the cancer has often become pretty extensive within and beyond the bladder. And it has changed so much on a molecular level that drug resistance is common.”

Other than a few cancers physicians can and do screen for in humans — using things like mammograms, colonoscopies and PSA screening — most cancers are found only after they are well established. And in veterinary medicine, it’s even worse because screening programs have not yet been developed.

Knapp and her team followed a group of 120 Scottish terriers for three years, performing urinary tract ultrasound exams and urinalyses every six months. When those tests raised suspicion for cancer, the team performed cystoscopic biopsies.  Thirty-two of those 120 dogs turned out to have early-stage bladder cancer. The screening caught the cancer before symptoms began to emerge and before the dogs’ behavior and health changed. Knapp’s team also assessed the accuracy of two types of commercially available urine tests for bladder cancer screening but found that those tests did not accurately predict or identify cancer.

That early detection gave Knapp’s team the ability to treat the cancer early and to study the way the cancer and tumors changed and developed at a molecular level as the cancer stages progressed. The dogs diagnosed with cancer were treated with deracoxib, a nonsteroidal anti-inflammatory drug (NSAID) that has antitumor activity in dogs and is typically used to treat bladder cancer in dogs. Usually, the drug results in a remission rate of 20% in dogs with the more typically advanced symptomatic bladder cancer. However, with the early detection from Knapp’s team, the drug resulted in a 42% remission rate.

“Finding the cancer early in these dogs, who were behaving normally but walking around and brewing cancer in their bladders, meant we were able to treat them earlier in the cancer development process,” Knapp said. “The drugs worked so much better because we started managing the cancer earlier. We expected the remission rate to be better than the ‘usual’ 20%, but we didn’t expect to see quite this dramatic a difference. The drug we used, Deramaxx, is considered a conservative, oral, affordable therapy. And it doubled the remission rate in the dogs, thanks to the early detection.”

Scottish terriers’ high genetic predisposition to bladder cancer means they make an excellent population in which to study early cancer detection, which also means veterinarians can do the most good and save the most lives and heartaches.

Owners of Scottish terriers know the risks going in. Scotties are prone to bladder cancer, as labs are prone to hip dysplasia and dachshunds are prone to spinal injuries. However, humans’ dedication to their dogs is what made the study happen. The Scottie community supported the study, and people drove dogs hundreds of miles to participate in the trial, showing how meaningful early cancer detection is for them and highlighting how much hope people hold for early cancer screening in both dogs and people.

“From the veterinary perspective, our study shows that we ought to be screening dogs for bladder cancer,” Knapp said. “This should become more routine for certain dogs in the future. But from the science side, we found so much more than that, especially in comparative genomics. Our study is the first to show that if you can truly find cancer early, and treat it, it makes a huge difference. Ours is the first, but we hope this will start a paradigm shift. We are moving toward a more personalized, proactive approach to addressing cancer.”

Note to journalists: A video of Knapp discussing her research is available to all AP Video Hub subscribers.