How could future autonomous transportation be accessible to everyone? 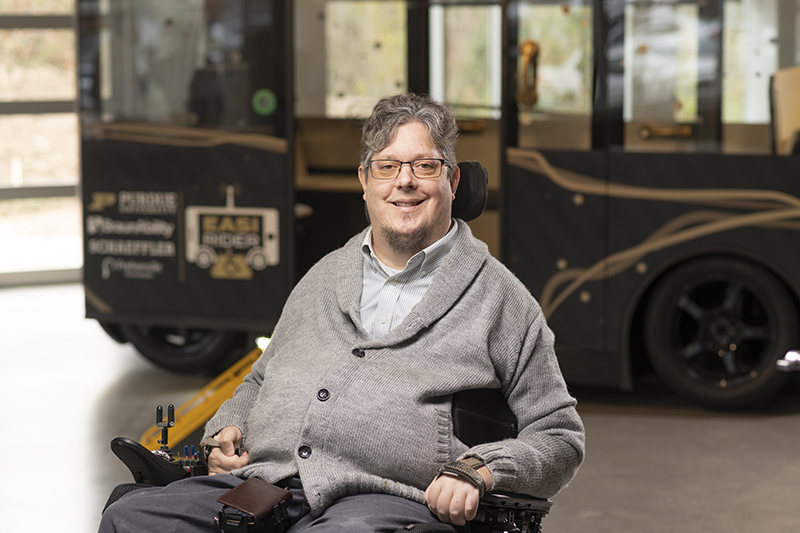 WEST LAFAYETTE, Ind. – When Brad Duerstock was 18, a spinal cord injury paralyzed his arms and legs, requiring him to use what control he had left in his hands to operate a power wheelchair.

Throughout the more than 30 years since, Duerstock has seen smartphones, tablets and other types of technology get developed but not become usable for him or others with disabilities until years later.

“It’s always been a retroactive accommodation,” he said.

Duerstock, a professor of practice in industrial engineering and biomedical engineering at Purdue University, is working to change that for autonomous vehicles while the technology is still in its early days. The goal is that when these vehicles start to hit the road everywhere, they will be able to accommodate anyone who wants to use them.

“It’s really the wrong way to go to figure out how to adapt technology for a wheelchair user after already developing the technology,” he said. “But if, instead, we consider, ‘Hey, these are all the needs,’ and then create some standards based on the minimum requirements of what the entire population needs, we can design the vehicle around those minimum standards.”

Helping to establish standards on accessibility for autonomous vehicles

Duerstock and Brandon Pitts, a Purdue assistant professor of industrial engineering, have worked together for four years on topics related to technology accessibility and inclusive design and have constantly sought opportunities to contribute their ideas to help shape the future of transportation.

These ideas are already becoming part of a major national conversation on how to make autonomous transportation more inclusive.

Today (Nov. 17), Duerstock is a panelist for a webinar on accessibility and transportation hosted by Challenge.Gov, a program managed by the U.S. General Services Administration that crowdsources innovative solutions to critical issues through federally sponsored prize competitions.

Duerstock will share how he and Pitts co-led a team to develop a design concept for helping the industry make autonomous vehicles accessible to people with disabilities. Their team’s design concept won first place in a U.S. Department of Transportation competition this summer. The goal of the competition, called the Inclusive Design Challenge, is to spur the innovation needed to ensure that when autonomous transportation becomes widespread, it can accommodate people with any travel-limiting disability or mobility challenge. 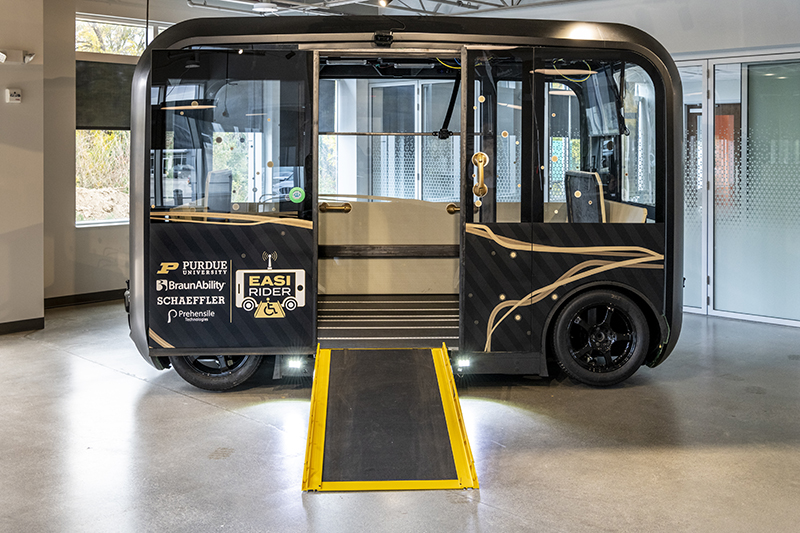 Purdue University researchers and their collaborators developed a realistic demonstration of an accessible design concept that industry could incorporate into its development of autonomous vehicles. (Purdue University photo/John Underwood) Download image

The winning design not only took into consideration the transportation challenges that people with disabilities face but also built on years of ideas generated among Duerstock, Pitts and BraunAbility, an Indiana-based company that has been designing and manufacturing vehicle accessibility solutions since 1972. Duerstock is among the first wheelchair users to have provided feedback on new product designs at the recently opened BraunAbility Global Innovation Lab in the Indianapolis area.

“We’ve had the steady benefit of Professor Duerstock’s expertise over the years,” said Phill Bell, senior director of global corporate strategy for BraunAbility. “It’s always good to have users come in and say, ‘I don’t like this interface’ or ‘I can’t see where I’m backing up in my wheelchair.’ As an engineer, Professor Duerstock can help steer us into the direction we should be headed.”

By the time Duerstock, Pitts and Bell had heard about the Inclusive Design Challenge, they had already identified autonomous vehicles as an opportunity to change the lives of people with disabilities and were working toward design solutions.

“BraunAbility, with Purdue, thinks about accessibility from the get-go, and we can bring those considerations to the original equipment manufacturers while they’re early in their design work,” Bell said. 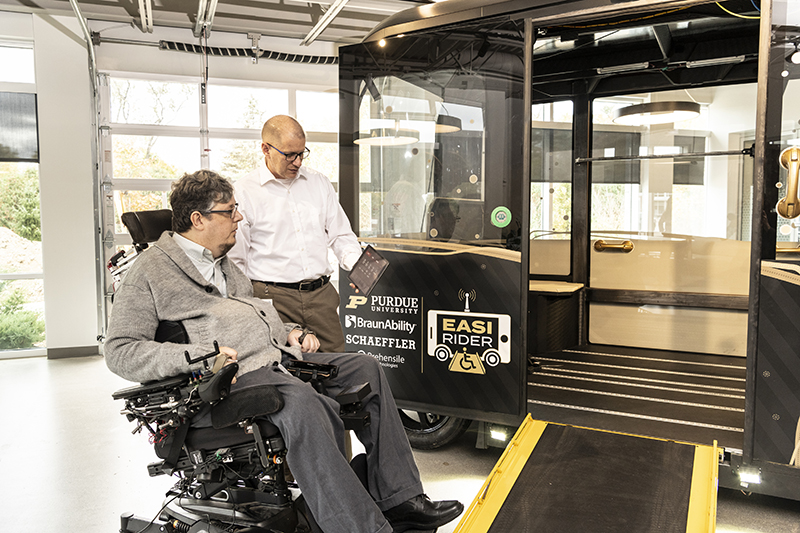 Brad Duerstock and Phill Bell (right) have been collaborating for eight years on how to improve the design of vehicles for people with disabilities. (Purdue University photo/John Underwood) Download image

For the Inclusive Design Challenge, the team built an automated, vehiclelike prototype that demonstrates the features autonomous transportation would need to serve people with a range of disabilities. The researchers call the prototype EASI RIDER, which stands for “Efficient, Accessible and Safe Interaction in a Real Integrated Design Environment for Riders with disabilities.”

Even though EASI RIDER isn’t meant to be driven (it doesn’t have a motor), the researchers showed that whether a person’s disability is physical or sensory, they can successfully operate the vehicle’s different controls all by themselves.

EASI RIDER not only has a voice-activated, wheelchair-accessible ramp but also uses sensors to prevent inadvertent deployment of the ramp into obstacles when parked. A mechanism within EASI RIDER helps secure a wheelchair into the safest position during a ride. The prototype can accommodate up to two wheelchair users at once and has reconfigurable seats for riders who don’t use wheelchairs. Cameras and sensors help passengers to better understand their surroundings in the vehicle and allow a remote operator to communicate with them in the case of emergency situations where the passengers might need assistance.

Using their personal mobile phone or tablet, a traveler can control the vehicle’s features such as interior lighting, the horn, headlights and entertainment. A screen inside of the vehicle would help a rider see the operator or access a map of their route if they are hearing-impaired or aren’t able to use their hands to press buttons.

“A lot of the features we included in the vehicle were intended to enable what we call a ‘seamless travel experience,’ which means that interacting with the vehicle is so natural that a person doesn’t know they’re interacting with it,” said Pitts, who conducts research on how older adult populations interact with various autonomous systems.

Pitts’ research influenced the design of EASI RIDER’s features. “Many of the same design solutions tested in my lab that aim to help aging adults better use digital technologies can also be used to support individuals with a range of disabilities,” Pitts said. 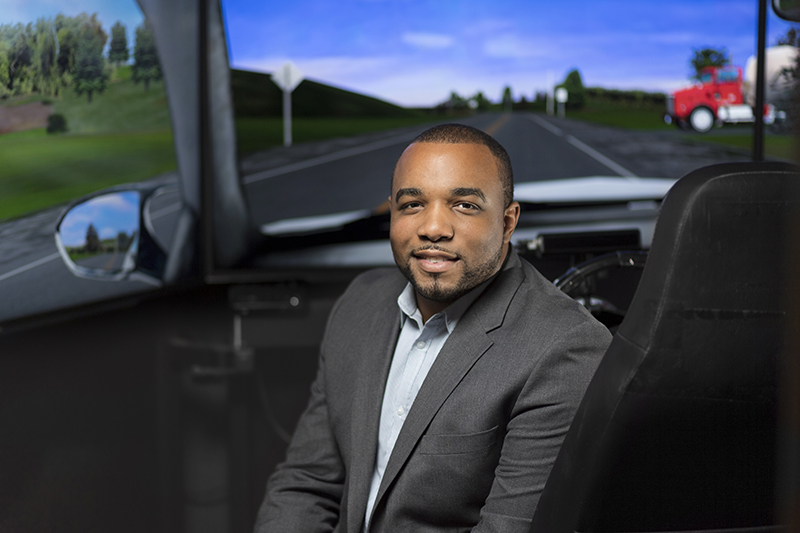 Brandon Pitts sits in the seat of an advanced driving simulator in his lab at Purdue University, where he studies how autonomous vehicles could accommodate older adult travelers who may want to use them in the future. (Purdue University photo/John Underwood) Download image

The EASI RIDER prototype also incorporated input from people with disabilities, including BraunAbility’s Driving Force, through surveys, interviews and interactive demonstration sessions. EASI RIDER was built using parts and expertise from three other companies in addition to BraunAbility: Local Motors, Schaeffler, and Prehensile Technologies, a startup run by Duerstock and Purdue alumnus Jeffrey Ackerman. Prehensile Technologies specializes in using robotics and power sensor systems for wheelchair users, building on robotic desk and table concepts co-invented by Duerstock and patented through the Purdue Research Foundation Office of Technology Commercialization. Prehensile Technologies is a client of the Purdue Foundry, an entrepreneurship and commercialization hub whose professionals help Purdue innovators create startups.

Even though EASI RIDER’s parts are technology that has already been serving people with disabilities in different settings – the automotive controls that Schaeffler contributed, for example, enable wheelchair users to drive cars – how these parts were integrated together is what makes the design so innovative.

“As we were finishing up the process of building EASI RIDER, I stepped inside of it and felt like I was standing in the future,” Bell said. “I hadn’t seen this sort of integration anywhere. This is the first iteration of what’s coming down the line.”

Thinking ahead on the future of transportation

The EASI RIDER team was awarded $1 million with its Inclusive Design Challenge win. Duerstock and Pitts will be using the prize money to establish a center at Purdue on accessible design for transportation. Through this center, Purdue researchers will engage with industry partners and governmental bodies to keep working toward inclusive vehicle design standards.

“We envision that our work will help build a more equitable transportation future and, in turn, promote a higher quality of life for people at different points along the ability spectrum,” Pitts said.

The team will also continue researching ways to develop technology that is universal for a wide range of disabilities. “Even though I have my own unique perspective, it’s not everyone’s perspective,” Duerstock said. “It takes some depth in understanding of what are everyone’s needs.”


Note to journalists: B-roll of a prototype designed to improve the accessibility of autonomous transportation is available on YouTube. Additional photos of the prototype and b-roll of Purdue University’s campus are available via Google Drive.