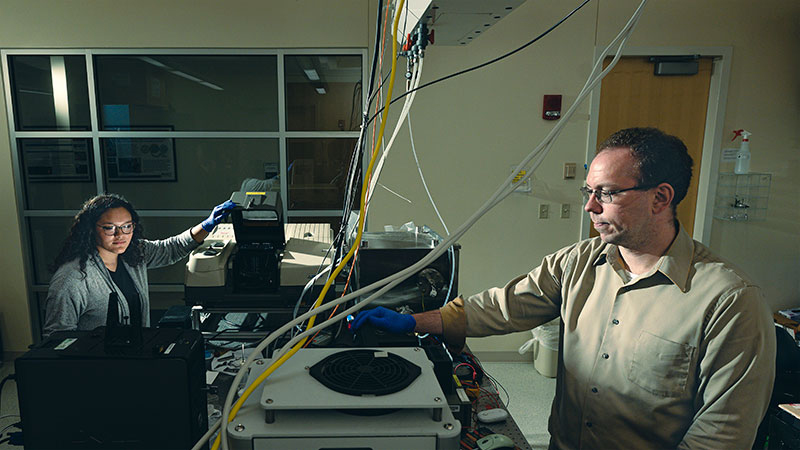 SCALE officials said this expansion of the nation’s preeminent program will further its goal to develop a next-generation workforce that can return the United States to prominence in global microelectronics manufacturing.

Led by Purdue, funded by the Department of Defense and managed by NSWC Crane, SCALE facilitates a different approach to training highly skilled U.S. microelectronics engineers, hardware designers and manufacturing experts. SCALE brings together a public-private-academic partnership of 17 universities and 34 partners within the defense industry and government. The industry and government partners regularly meet and update a list of knowledge, skills and abilities important for new entrants to the workforce. The SCALE universities then update their curriculum to ensure the students are prepared for upcoming needs in the rapidly advancing microelectronics field. Read more on Purdue’s leadership and student focus in microelectronics.

Jennifer Linvill, co-principal investigator of SCALE research and assistant professor of technology leadership and innovation at Purdue Polytechnic Institute, said the newly announced funding will allow recruiting a new, diverse group of students to work in defense microelectronics as interns and after graduating.

Goals for the next five years include:

“The United States is committed to expanding and strengthening its semiconductor industry and workforce rapidly over the next five years,” Bermel said. “SCALE takes a holistic approach to the microelectronics workforce gap by comprehensively addressing system challenges for workforce training and recruiting.”

The funding announcement is the latest highlight in Purdue’s ongoing leadership in microelectronics and workforce development. Secretary of State Antony J. Blinken and Secretary of Commerce Gina Raimondo visited the university on Sept. 13 to tour Birck Nanotechnology Center, one of the Purdue facilities helping the United States restore domestic semiconductor manufacturing and competitiveness abroad.

“Purdue’s cutting-edge research and workforce development programs are at the forefront of helping us shape the future of innovation in America’s semiconductor manufacturing industry,” Raimondo said during the tour.

Purdue already has established excellence in other key research areas considered critical to national security, including microelectronics. Strategic initiatives such as the first comprehensive Semiconductor Degrees Program are intended to prepare a next-generation workforce for industry, while a separate partnership with SkyWater Technology will result in a $1.8 billion future state-of-the-art semiconductor manufacturing facility.

The SCALE program aligns with economic development work that Indiana Gov. Eric Holcomb has advanced in recent months, focusing on putting Indiana at the forefront of microelectronics production to bolster the state’s economy and further ensure U.S. national security.

Specifically designed microelectronic chips and packages power the technologies used every day from cellphones, computers and cars to pacemakers, the internet and the electrical grid. Their power and affordability have advanced steadily but are reaching the physical limits of standard design and production, which is driving new directions encompassed by SCALE, such as heterogeneous integration. SCALE aims to develop students to be ready to fill every level of the expanding microelectronics workforce.

The demand for microelectronics increased by 26.2% in 2021. But while the United States consumes about half of the chips produced worldwide, only about 12% are manufactured in this country.