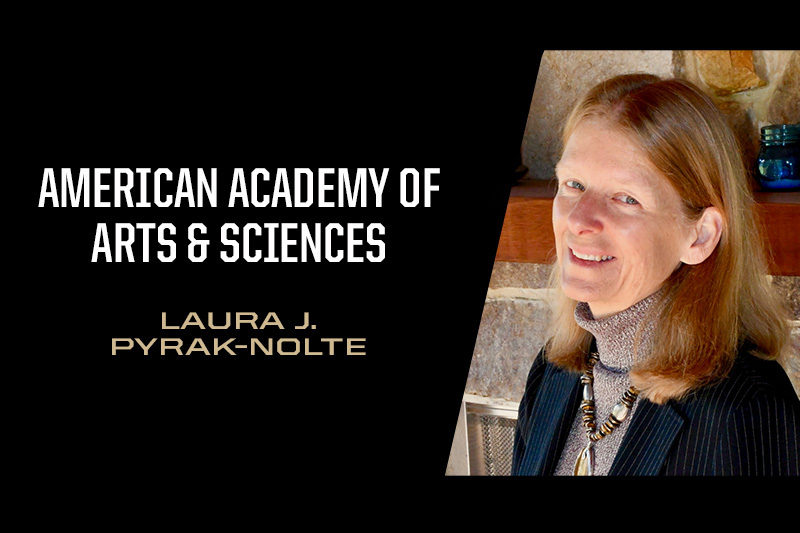 Laura Pyrak-Nolte, Distinguished Professor of Physics and Astronomy in the College of Science at Purdue University, has been elected to one of the nation’s oldest and most prestigious honorary societies, the American Academy of Arts and Sciences.

WEST LAFAYETTE, Ind. — A Purdue University physics and astronomy professor whose work is dedicated to environmental safety and enhancing renewable energy production has been elected to one of the nation’s highest science honors.

Laura Pyrak-Nolte, Distinguished Professor of Physics and Astronomy in the College of Science, has been elected to one of the nation’s oldest and most prestigious honorary societies, the American Academy of Arts and Sciences. Pyrak-Nolte, who is recognized as the world’s leading expert on the acoustic, mechanical and transport characteristics of porous and fractured media, is one of 261 members of the newest academy class. Her work in this field leads to innovation in the availability of fresh water to drink, the power of geothermal resources to heat and cool our homes, and aids the modern energy economy that relies on the injection and withdrawal of fluids through fracture networks in rock.

Her research has led to novel ways to reveal how seismic waves can be utilized to characterize fractured rock masses and how the fractured medium affects the propagation of seismic waves. She leads the Rock Physics Research Group that studies the physics of fractures in rock, detecting whether they slip or leak fluids into the environment. Understanding fractures is vitally important to a wide range of fields, including improving the safety and efficacy of geothermal energy and natural gas production, carbon sequestration and nuclear waste disposal.

“We are enormously proud of Professor Pyrak-Nolte and her scientific achievements,” said Patrick J. Wolfe, the Frederick L. Hovde Dean of the College of Science. "This latest well-deserved recognition for her work in geophysics is absolutely emblematic of our efforts to elevate Purdue Science to ever-greater heights in research and scholarly impact."

Pyrak-Nolte also is an elected member of the National Academy of Engineering, a fellow in American Association for the Advancement of Science, and a fellow in the American Geophysical Union. These allocations recognize Pyrak-Nolte’s distinguished efforts toward advancing scientific applications.

She also holds courtesy appointments in both the Lyles School of Civil Engineering and the Department of Earth, Atmospheric, and Planetary Sciences at Purdue.

“I am honored to have been elected to the American Academy of Arts and Sciences, and I want to thank Purdue, the College of Science, and the Department of Physics and Astronomy for their support during my career,” Pyrak-Nolte said.

This distinction recognizes achievements of individuals in academia, the arts, business and public affairs. The 2022 class will be inducted at a ceremony in Cambridge, Massachusetts.

Those from Purdue previously elected to membership include:

Founded in 1780, the American Academy of Arts and Sciences is an independent research center that conducts multidisciplinary studies of complex and emerging problems. Current academy research focuses on science and technology, global security, social policy and American institutions, the humanities and culture, and education. Headquartered in Cambridge, Massachusetts, the academy’s work is advanced by its 4,600 elected members worldwide who are leaders in the academic disciplines, the arts, business and public affairs. Among its fellows are more than 250 Nobel Prize winners and more than 60 Pulitzer Prize winners.