President Daniels to grads: ‘I’m talking to you’

Purdue University President Mitch Daniels made these remarks during the university’s spring commencement ceremonies the weekend of May 13-15 in Purdue’s Elliott Hall of Music.

WEST LAFAYETTE, IND. — Greetings, friends, and welcome. I should say “welcome back.” We are back in Elliott Hall, where Purdue spring commencements belong, for the first time in three years. And as I’ll tell you in a few minutes, to me that matters beyond just the pleasure of returning to this beautiful, traditional venue.

Starting with my first delivery of these remarks a decade ago, I have ended them with the same signoff: “Hail Purdue, and each of you.” It was just meant to be a little signature, a rhetorical device chosen as much for its cadence as for any deep meaning. But reflecting on this year’s ceremony got me thinking that maybe there’s more to it than what I’ve intended all these years.

Many talks on these occasions address themselves to “all you graduates” or “the Class of 20-x”. I guess I’ve approached it that way some years. Today, I’m thinking more like those movie tough guys who ask, “You talkin’ to me? You talkin’ to me?” Today, I’ll be talking to you, each of you, individually, or at least I’ll be trying to. 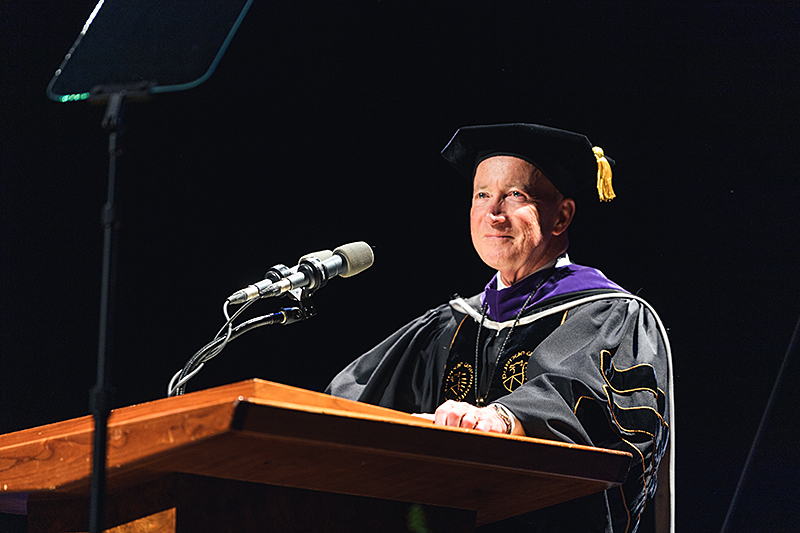 A friend told me of a commencement he attended where the speaker, to inject a little levity, advised the graduates, “In life, it’s not who you know that counts. It’s whom.” (I assume at least the English majors in the crowd get it.) A funny line, but bad advice. It is who that counts. Not who you know, but who you are.

The further I go, the less I’m sure how to answer the question, “Who are you?” Where to start? I’m a Purdue employee, a happy husband, a father of four, a businessman, a former elected official, a Presbyterian elder, a history buff, and a mediocre golfer. Ancestry.com informs me that genetically I’m more Syrian and Lebanese than anything else, but I’ve got high percentages of Scotch, Welsh and a dash of Italian mixed in.

And I’m a dog lover. I grew up in a family of them. We got all ours from the Humane Society, every one some sort of mixture. And every one was great: loyal, loving, a full member of the family. During those years, I adopted my mother’s opinion that mutts are the best.

We’d all better hope Mom was right. Because we’re all mutts here today. Hybrids, amalgams, crossbreeds, mongrels. Mutts. If you doubt that, go check with Ancestry.com.

There are no one-dimensional “you’s.” Every one of you, when you pause to think about it, can already name a list of qualities that make up “you.” That list will keep growing as you leave here and launch into the fascinating and varied lives you are destined to lead. You’ll keep learning, and growing, and adding new elements to your individuality. The more facets a diamond has, I’m told, the more brilliant it is; the same will be true for an ever more interesting and differentiated “you.” The one certainty is that there will be no exact copies, no one just like you and, therefore, no one box anyone can stick you in.

But there will be people who want to take away your “you.” There always have been. The pharaohs, monarchs, and warlords of old, to whom other people were mere tools, to be used and discarded. In recent times, the proponents of all the “isms” that viewed people as helpless ciphers in some predetermined historical trend, or valueless instruments of an all-powerful state. In the worst cases, some people were grouped together and treated as sub-human, not deserving to exist at all.

These days, your individuality is challenged by some who seek to slap a label on you, to lump you into one category or another, and to assert that whatever you are, your choices have little to do with it. What matters is not what you think or do, they claim, but what group they have assigned you to. You’re a prisoner of your genes, or of circumstance, or of some societal forces against which you are defenseless.

Such views may be cloaked in caring, sympathetic terms, but they are deeply disrespectful of those they affect to be supporting. They are a denial of your personal dignity, and ability, and will power. Someone attempting to herd you into a group is someone with an agenda, and your personal wellbeing is not its main purpose.

Your experience, and success, at this institution should convince you not to listen to such disrespect. In a few moments, when you walk up here, it will be your individual achievement we are honoring, and only you know how much individual effort it took to get here.

He eventually gave Colts fans like me a thousand great memories, but never one I admired more than Peyton Manning’s first action as a professional athlete. At the news conference announcing his multimillion-dollar contract, the 22-year-old Manning was asked, “What are you going to do with all that money?” He answered, “Earn it.”

The degree you are about to receive is not being conferred on a group. We aren’t awarding it to any club, team, or fraternity you happen to belong to. It’s not because of your hair style, eye color, or because your parents went to Purdue. Nothing entitled you to it. It is yours, and yours alone, because the work that justifies it was yours. You earned it. You.

The years ahead will bring new, even more difficult threats to your “you-ness.” The onrushing technologies of artificial intelligence will, some believe, supersede and devalue human intelligence and judgment. When the machines we have made, which can already beat any human in chess, or at reading X-rays, or at discovering new drugs, race vastly past our ability to reason or to perceive reality, where will that leave us – actuarially, I probably mean “leave you” – as an individual?

In an emergency, will tomorrow’s pilots take the controls or defer to the computer? Will the surgeon trust her eyes and judgment or allow the robot to make the incision the algorithm has chosen? Will the president yield to the sensors that tell him to launch the missiles right now, before it’s too late? As one recent book posed the alternatives, will AI be a “tool, a partner, or a rival?”

In everyday life, when you have all around you gizmos that make Alexa look like a kindergartener, will you still be using the intelligence and reasoning skills that got you here today? Or will you turn over your “you” to a dazzling device that, experts predict, will know you and your preferences before and better than you do. In other words, as the machines become more and more autonomous, will you still be?

One of today’s eminent philosophers thinks not. He writes that when 21st century technology “know(s) me far better than I know myself … individualism will collapse and authority will shift from individual humans to networked algorithms.”1 Call me old-fashioned, but I don’t like the sound of that.

Many of you are already contributing to the advance of these technological miracles and, thus, to the problems they will bring with them. Heaven knows where your future innovations will take us. All of you will be involved in the answers, because these changes and their challenges will be part of literally everyone’s life.

The answers start with you. Somewhere I came across another commencement speech, given at another university by Purdue’s own Neil Armstrong, less than a year after he walked on the moon. He quoted Aldous Huxley: “There’s only one corner of the universe you can be sure of improving, and that’s yourself.” That chore will only get tougher in a world where the machines are smarter than their owners, where it becomes easy to let the machines make the decisions. Quoting the same book I just mentioned, “(R)eason alone may come to seem archaic.” Some people may “let their capacities for independent reason and judgment atrophy.”

Due to other technological miracles, your life expectancy will be decades greater than ours from earlier generations. But that’s not the life expectancy that I think about at these commencements. Purdue expects more of you than a long lifespan. Purdue expects that you will take the best of what you absorbed here into a world that becomes better for your being in it. That you will prove that you are in charge of our technologies and not the other way around. That you will, with Commander Armstrong, constantly improve that little corner of the world that is you. That you will politely but resolutely decline to be labeled, stereotyped, or reduced to any one-dimensional version of the true “you”.

At the outset, I said there was a larger reason I was so happy to be back in Elliott Hall. That’s because, in here, over six separate ceremonies, Purdue still honors every graduate one by one. Most schools our size long ago went to batch processing, where degrees are conferred on groups, sometimes the entire class at once.

Here, we take a different view. No matter how big Purdue gets, we value each Boilermaker as an individual. That diploma we’re about to hand you is yours and yours alone. Sure, you had help, and support, and I hope some valuable mentoring, but fundamentally you will be crossing this stage because of what you have accomplished. You.

So walk proudly. You are about to add another facet to the diamond that is you: “Graduate of Purdue University.” It will be far from your last distinction, but I hope it will always be one that you value as highly as your university values you today.

Hail Purdue, and each of … you.

Note to journalists: Video b-roll from commencemencent is available on Google Drive.