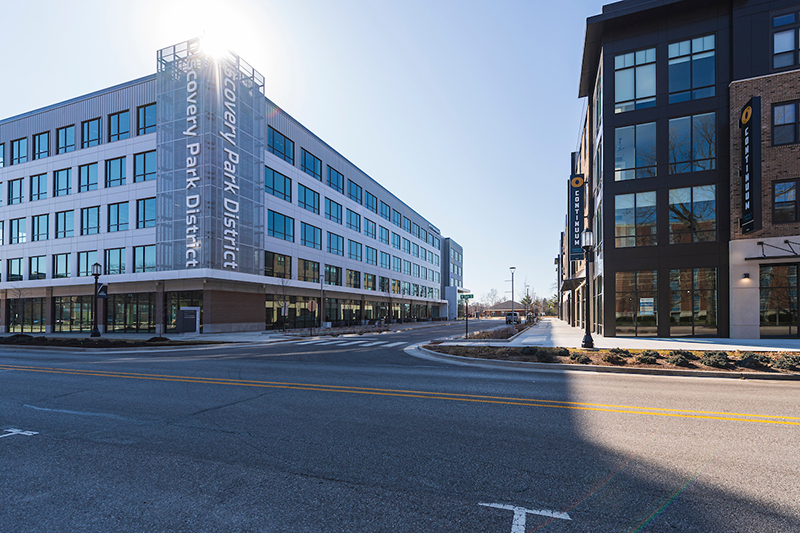 Discovery Park District at Purdue is already an economic success — powered by hundreds of new, high-tech jobs, cutting-edge research facilities, and residential and commercial development. Nearly $900 million in public investment and $1.5 billion in private-sector investment has flowed into Greater Lafayette from 2015-2020, much of that through the Discovery Park District at Purdue. (Purdue University photo/Rebecca McElhoe)

From an ambitious goal to create an entrepreneurially driven and innovative ecosystem for researchers to work together across disciplines in tackling the grand challenges of our time, Purdue University is taking the next steps to lift that concept to even greater heights.

The $1 billion mixed-use development of housing, high-end manufacturing, and industry and research-driven partnerships, called Discovery Park District at Purdue, is already an economic and commercial success. And it’s just four years into a 30-year master plan, uniquely extending the impact and reach of a leading Big Ten university into its neighboring community. 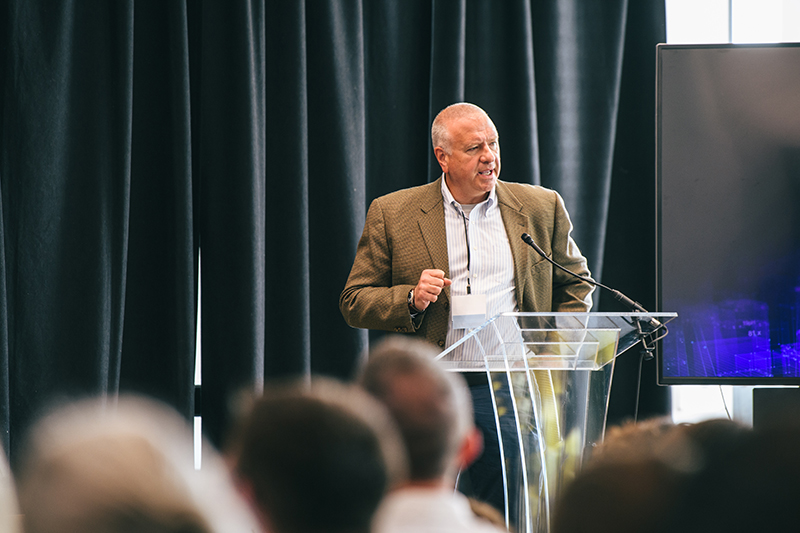 Brian Edelman, president of the Purdue Research Foundation, addresses a group of Purdue, industry and community leaders at a Discovery Park District at Purdue event on May 25 in the the district’s Convergence Center for Innovation and Collaboration. (Purdue University photo/Rebecca McElhoe) Download image

The Discovery Park District at Purdue, a $1 billion mixed-use development embedded into the fabric of the Purdue University campus, highlights the early success of a vision to establish a thriving “live-work-play” community and the impact of university-private-community partnerships.

And there’s much more to come as Purdue and its key local and global partners take the steps to capitalize on the growing national trend for those who want to live, work, play and — the latest — retire near a prosperous and progressive university community.

“President Daniels conceived and championed this idea as a way to build the Greater Lafayette economy while making the nearby campus environment exciting and attractive so Purdue can recruit the talent it needs for the future,” said Brian Edelman, president of the Purdue Research Foundation.

Purdue Research Foundation is leading the development of the 400-acre district. Already ahead of its 30-year timeline, the district has transformed the west end of the campus into a gateway for intellectual discourse and commercial and industrial collaboration.

According to the Indiana Chamber of Commerce, $889.5 million worth of public investment and $1.5 billion in private-sector investment flowed into Greater Lafayette from 2015-20, much of that through the Discovery Park District at Purdue.

The depth and breadth of the public-private investment project is visible through the progress in the district, which has expanded beyond the State Street Redevelopment Project and the established Discovery Park interdisciplinary research complex of facilities that Purdue launched in 2001. 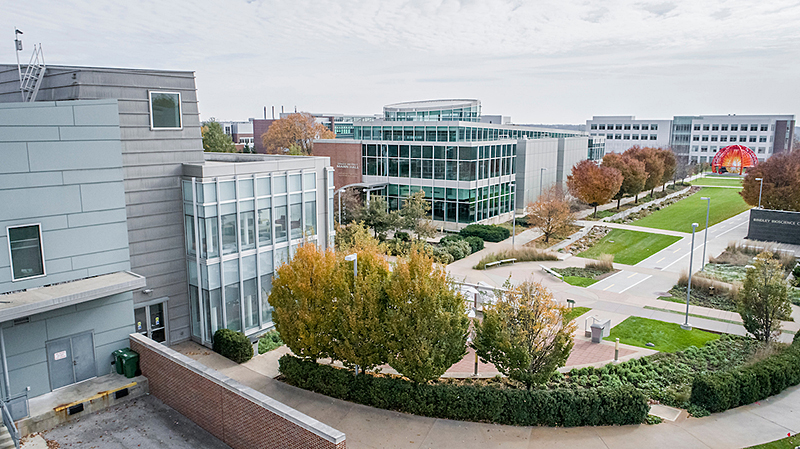 A cornerstone of Discovery Park District at Purdue is the state-of-the-art research facilities and laboratories that are a part of the university’s multidisciplinary advancements in aerospace and defense, life sciences and animal health, nanotechnology, agriculture-related technology and innovation, alternative energy, cybersecurity, advanced manufacturing and other critical fields. (Purdue University file photo) Download image

Rolls-Royce, Saab and Schweitzer Engineering Laboratories have brought millions of investment dollars to the district and have taken advantage of Purdue’s engineering and technology expertise. More importantly, they’ve added hundreds of jobs to the community.

Aerospace engine manufacturer Rolls-Royce announced plans in April to grow its already sizable and long-standing investment in the district. Through a $204 million project, the United Kingdom-based company will expand one building and construct two test facilities, creating 30 jobs that will pay average annual salaries in excess of $90,000.

Schweitzer Engineering opened its $20 million facility in February 2020 on the west edge of Discovery Park District on U.S. 231. There, 300 employees focus on electric power research and development. The founder of the Pullman, Washington-based company is Purdue electrical engineering alum Edmund O. Schweitzer III, who created the first digital protective relay in 1982, revolutionizing the electrical protection industry.

These industry partnerships also represent major wins for the national security and technology initiative of Purdue’s Next Moves in advancing the university’s efforts to become the U.S. epicenter of hypersonics activity. 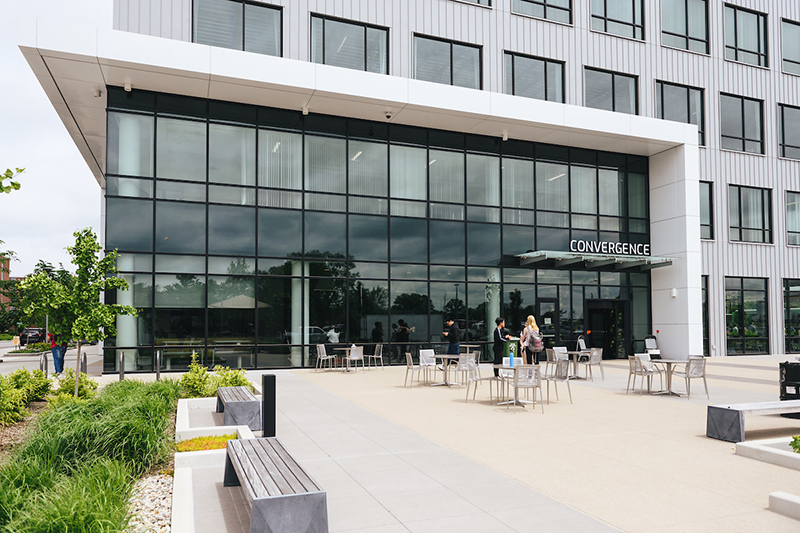 The Convergence Center for Innovation and Collaboration is billed as the “business front door to Purdue University” as part of the “live-work-play” concept of Discovery Park District at Purdue. With 143,000 square feet of space, Convergence currently includes Bayer, Beck’s and Wabash as major tenants. (Purdue University photo/Rebecca McElhoe) Download image

Convergence is now home to the Purdue Foundry, which supports Purdue’s growing startup community. The Purdue Office of Technology Commercialization and Purdue’s Office of Corporate and Global Partnerships also are housed in Convergence. Other major Convergence tenants, supported by co-working industry pioneer Carr Workplaces, include: 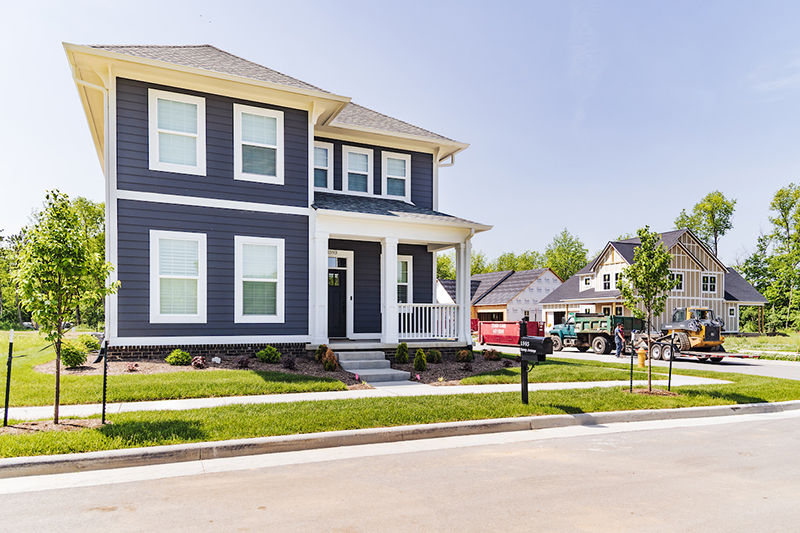 Discovery Park District at Purdue is creating an unbeatable combination through private-public partnerships to make its “live-work-play” concept a reality. The $1 billion development on the west edge of Purdue’s West Lafayette campus is capitalizing on the growing national trend for those who want to live, work and play near a prosperous and progressive university community. (Purdue University photo/Rebecca McElhoe) Download image

Tapping into national trend to live, work, play, retire in or near university community

Discovery Park District at Purdue is a testament to the adage, “If you build it, they will come.”

And that’s for families, young professionals and retirees excited about living near a university community, the vibrancy of its culture — and West Lafayette’s No. 8 ranking of the Best College Towns & Cities in America. In compiling its 2022 list, WalletHub gauged 415 communities across three key areas: wallet friendliness, social environment, and academic and economic opportunities.

Anchoring the district’s residential effort is Provenance, led by developer Old Town Design Group of Carmel, Indiana. Provenance is seeing strong activity and interest across its offerings of single-family homes, apartments and condominiums: 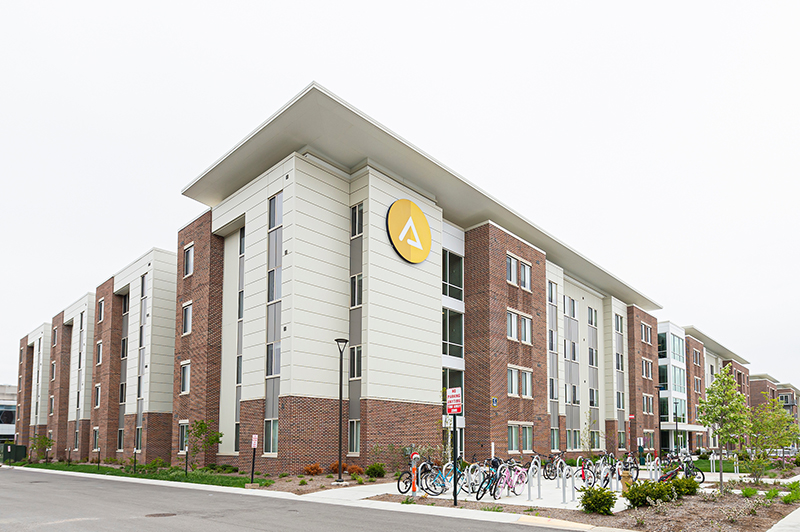 A housing boom is underway at Discovery Park District at Purdue, with 18 of the planned 56 single-family homes already sold, well ahead of schedule for its first phase. Of 12 townhomes in the first phase, four units have already been sold, and all 125 apartments in the first phase are 100% leased. Meantime, the 830-bed Aspire, a four-building apartment project that opened in 2019, is fully leased and is scheduled to be folded into Purdue’s residence hall system. (Purdue University file photo) Download image

Additionally, the $86 million, 830-bed Aspire at Discovery Park District, a four-building apartment project that opened in 2019, is fully leased. Purdue trustees announced plans this month to purchase the property from developer Balfour Beatty-Walsh Housing LLC. Purdue Research Foundation is scheduled to complete the purchase, before transferring the property to Purdue for folding it into its residence halls system. University ownership will require state approval.

Continuum, a three-acre, mixed-use apartment and commercial development just west of Convergence, began leasing its 246 luxury one- and two-bedroom apartments as well as 15,000 square feet of street-level commercial space in early 2022. The developer is J.C. Hart Co. of Carmel.

Future plans for Provenance include another 125 apartments and approximately 200 more single-family attached and detached homes. Plans also include possible senior housing for retirees as well as a community center, fitness center, restaurants and retail, a centralized greenspace and community gardens.

Source, a 57-unit condo complex slated for a corner of Squirrel Park, is currently planned to be completed in 2024 with one-, two- and three-bedroom condos for alumni who now want a place near campus for football weekends and other Purdue events.

Purdue’s deep ties to Sonny Beck, chief executive of Beck’s Hybrids — a family-owned seed company serving the Midwest for over 80 years — have planted the seed for a novel addition to the district and the Source project. Beck is a Purdue alum and current member of the university’s board of trustees.

The Beck family donated a 1938 horse barn that will be repurposed as an event venue and possible restaurant at State Street and Airport Road. The family also made a generous donation to help with costs to dismantle, move and reassemble the historic barn, which is 72 feet by 142 feet and stands 45 feet tall. 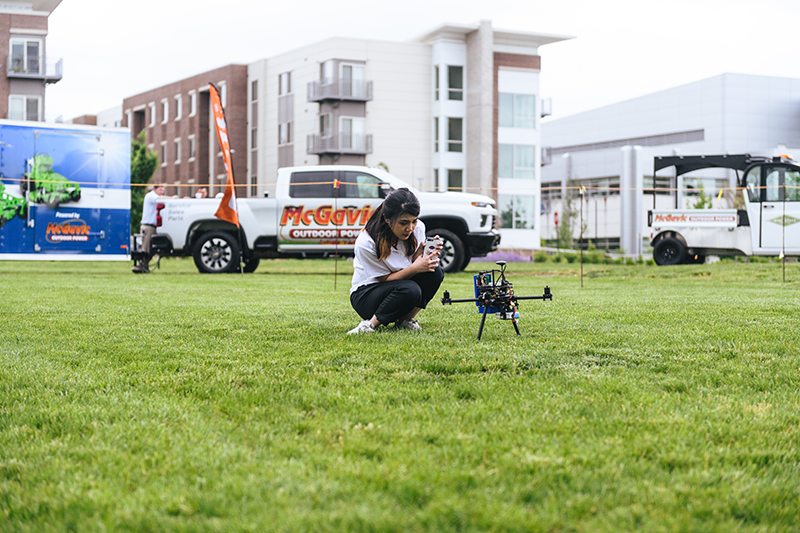 Discovery Park District at Purdue is designed to capitalize on its proximity to Purdue and its leading research, innovation and learning culture for growing deep partnerships between the university, industry and the community. In May, the district hosted a daylong event showcasing autonomous vehicles and highlighting innovations such as 6G and Lab to Life for moving from testbed to scalable, real-world deployment into neighborhoods like Discovery Park District. (Purdue University photo/Rebecca McElhoe) Download image

Uniquely blending that live-work-play concept, the university launched Work From Purdue, an innovative program that incentivizes remote workers to move to the district. Purdue, consistently ranked in the top 10 most innovative colleges in the nation, is the only university to engineer such a future-focused, live-and-work lifestyle for people working remotely.

As demand for housing in the live-work-play community is being met, market demand for amenities such as restaurants, retailing and medical services also grows.

Ascension St. Vincent on May 6 announced it will build a microhospital in the district, featuring eight inpatient beds, eight ER treatment rooms, CT imaging, an ambulatory surgery center, and other health care services. With site construction beginning this year at U.S. 231 and Airport Road, the microhospital for the first time puts inpatient and emergency room care within the city of West Lafayette.

Going forward, another key driver for residential and commercial development within the district is the Purdue University Airport. Opened in November 1930 as the nation’s first university-owned airport, it encompasses 537 acres divided into airside and landside facilities.

Discovery Park District at Purdue hosted a day of discovery and next-generation solutions on May 25, highlighting innovations such as 6G and Lab to Life for moving from testbed to scalable, real-world deployment into neighborhoods like Discovery Park District. Here’s the lineup of the panel and autonomous tech showcase videos from the celebration event: