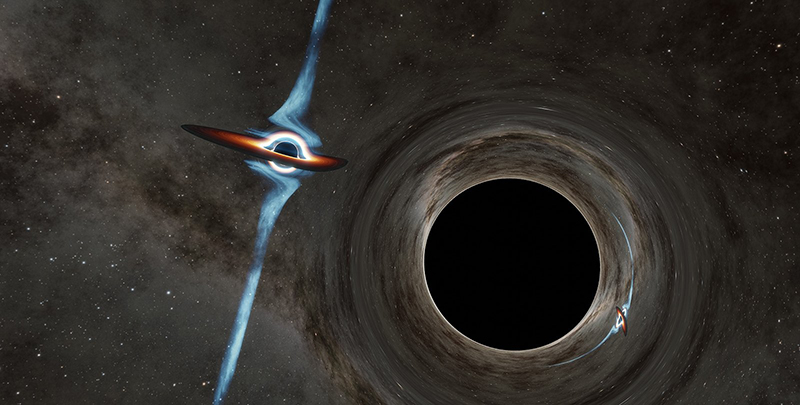 A team of researchers from Purdue University and other institutions have discovered a supermassive black hole binary system, one of only two known such systems. The two black holes, which orbit each other, likely weigh 100 million suns each. One of the black holes powers a massive jet that moves outward at very close to the speed of light. The system is so far away that the visible light seen today was emitted 8.8 billion years ago.

The two are only between 200 AU and 2,000 AU apart (one AU is the distance from the Earth to the sun), at least 10 times closer than the only other known supermassive binary black hole system.

The close separation is significant because such systems are expected to merge eventually. That event will release a massive amount of energy in the form of gravitational waves, causing ripples in space in every direction (and oscillations in matter) as the waves pass through.

Finding systems like this is also important for understanding the processes by which galaxies formed and how they ended up with massive black holes at their centers.

Researchers serendipitously discovered the system when they noticed a repeating sinusoidal pattern in its radio brightness emission variations over time, based on data taken after 2008. A subsequent search of historical data revealed that the system also was varying in the same manner in the late 1970s to early 1980s. That type of variation is exactly what researchers would expect if the jetted emission from one black hole is affected by the Doppler effect due to its orbital motion as it swings around the other black hole.  Matthew Lister in the College of Science at Purdue University and his team imaged the system from 2002 to 2012, but the team’s radio telescope lacks the resolution to resolve the individual black holes at such a large distance. His imaging data supports the binary black hole scenario and also provides the orientation angle of the jetted outflow, which is a critical component in the paper's model for the Doppler-induced variations.