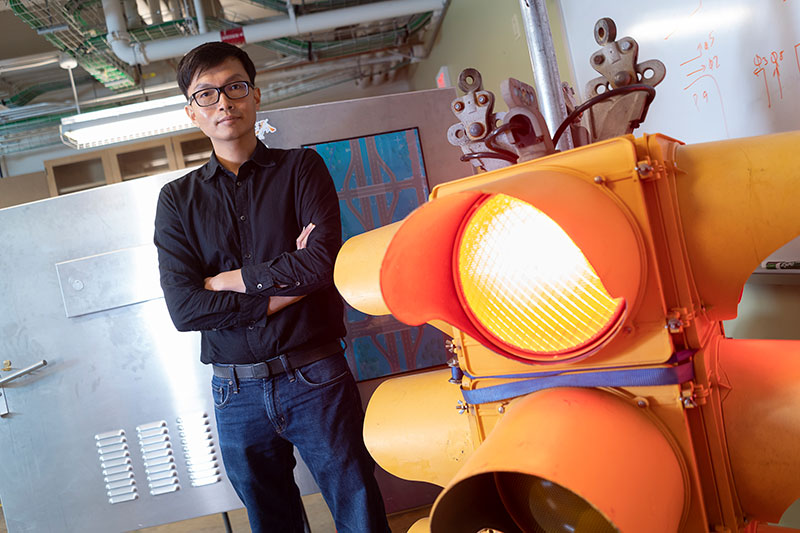 WEST LAFAYETTE, Ind. – An invention from Purdue University and the Indiana Department of Transportation that uses wireless communication devices could save lives at high-speed traffic signals.

According to the Federal Highway Administration, 2 million crashes occur annually at intersections with traffic signals, leading to hundreds of thousands of injuries and more than 3,000 fatalities. 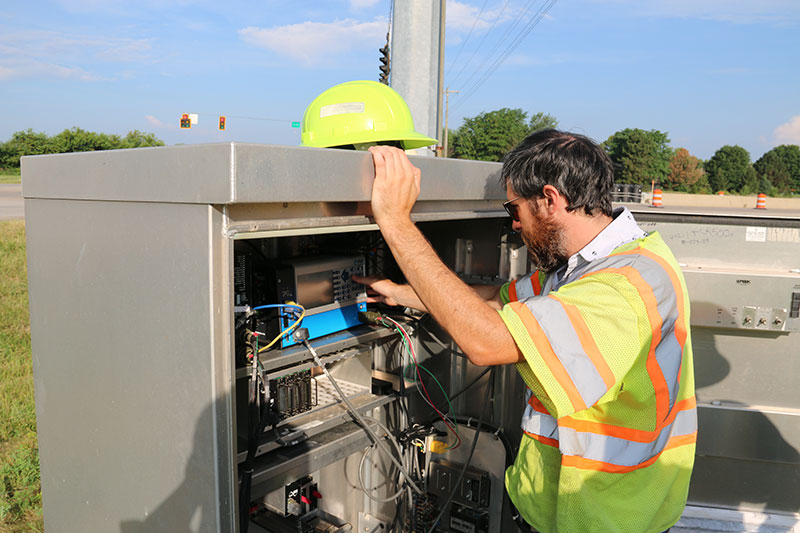 Mathew said a driver's decision to stop at a traffic signal or continue through it is made at the onset of the traffic signal turning yellow. He said a section of roadway upstream of an intersection, known as the dilemma zone, is an area where a vehicle can neither stop safely nor clear an intersection at its present speed.

"To reduce crashes, the key idea is to provide dilemma-zone protection," Mathew said. "One would think yellow time can be extended; however, drivers tend to adapt to this, resulting in lower probabilities of stopping. The state-of-the-practice for actuated intersections – intersections where timing is influenced by sensors – is to use green extensions, where the green time is extended for a certain period when a vehicle is present. Although this reduces the exposure of vehicles to the onset of yellow, this can go only for so long."

The Purdue-INDOT technology extends green time or indicates yellow early as necessary to ensure safety and efficiency to the next intersection on a 0.1-second basis. The system would consider the trajectory of each vehicle relative to a predetermined time of when the green would end. If there is enough time to spare, the green is extended until the vehicle clears the intersection. However, when there are other vehicles competing for green time on other movements, the system would indicate yellow early before the vehicle enters the dilemma zone for a safe stop. 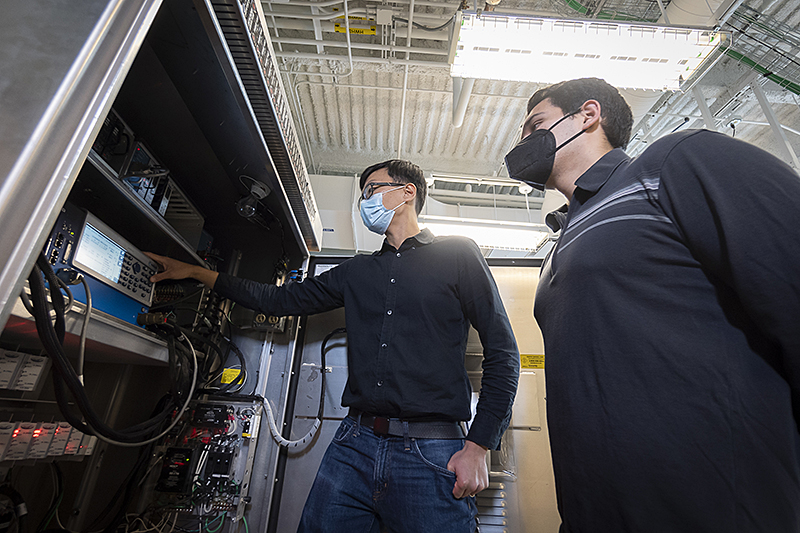 "Infrastructure sensors have a fixed range, are expensive, may require intrusive installation on existing infrastructure, and need routine maintenance to ensure proper operation," Li said. "And most sensors do not detect vehicles continuously one mile away to adjust timing changes, such as when the onset of yellow occurs."

The technology uses wireless communication devices placed at traffic signals and in vehicles, and specialized control logic at the signal controller to bring it all together. Li believes barriers for his technology can be overcome.

"Vehicles are already rolling off the assembly lines with built-in communication devices in the form of cellular. High-bandwidth, low-latency technologies such as 5G and beyond are being more widely adopted around the country and the world," Li said. "Compelling use cases such as reducing yellow- and red-light incursions for heavy vehicles and the safety data to support the findings will accelerate adoption by transportation agencies, I believe."

The technology was tested during brief sessions over a period of a week at County Road 500 S. at U.S. Highway 231 in Tippecanoe County, Indiana. The remainder of the benefit estimation was simulated.

Platte said the tests proved the technology has the potential to reduce heavy vehicle red-light incursions by a significant amount.

"During my time working at the Indiana Department of Transportation, I have only been aware of conceptual-use cases involving onboard vehicle communication technology integrating with live traffic signal control,” he said. “Our new technology moves this integration beyond the merely conceptual. This work provides an implemented real-world use case that addresses an important safety concern, among other applications.

"As a signal systems field engineer, I work with live traffic daily. Crash statistics are more than just numbers for me. I have encountered situations where this technology could have potentially saved the lives of people in my community. I look forward to robust implementation of our technology and similar technologies in the automotive and traffic-signal infrastructure industries."

The technology was disclosed to the Purdue Research Foundation Office of Technology Commercialization, which has applied for a patent from the U.S. Patent and Trademark Office to protect the intellectual property. For information on licensing opportunities, contact Matt Halladay of OTC at mrhalladay@prf.org about 2020-LI-68904.

"We are interested in working with more vehicle and truck manufacturers and government partners at safety-critical, high-impact corridors that will bring tremendous safety benefit to the motoring public," Li said.

The Purdue Research Foundation Office of Technology Commercialization operates one of the most comprehensive technology transfer programs among leading research universities in the U.S. Services provided by this office support the economic development initiatives of Purdue University and benefit the university's academic activities through commercializing, licensing and protecting Purdue intellectual property. The office is housed in the Convergence Center for Innovation and Collaboration in Discovery Park District at Purdue, adjacent to the Purdue campus. In fiscal year 2020, the office reported 148 deals finalized with 225 technologies signed, 408 disclosures received and 180 issued U.S. patents. The office is managed by the Purdue Research Foundation, which received the 2019 Innovation and Economic Prosperity Universities Award for Place from the Association of Public and Land-grant Universities. In 2020, IPWatchdog Institute ranked Purdue third nationally in startup creation and in the top 20 for patents. The Purdue Research Foundation is a private, nonprofit foundation created to advance the mission of Purdue University. Contact otcip@prf.org for more information.


Note to Journalists: Photos and video are available on Google Drive.