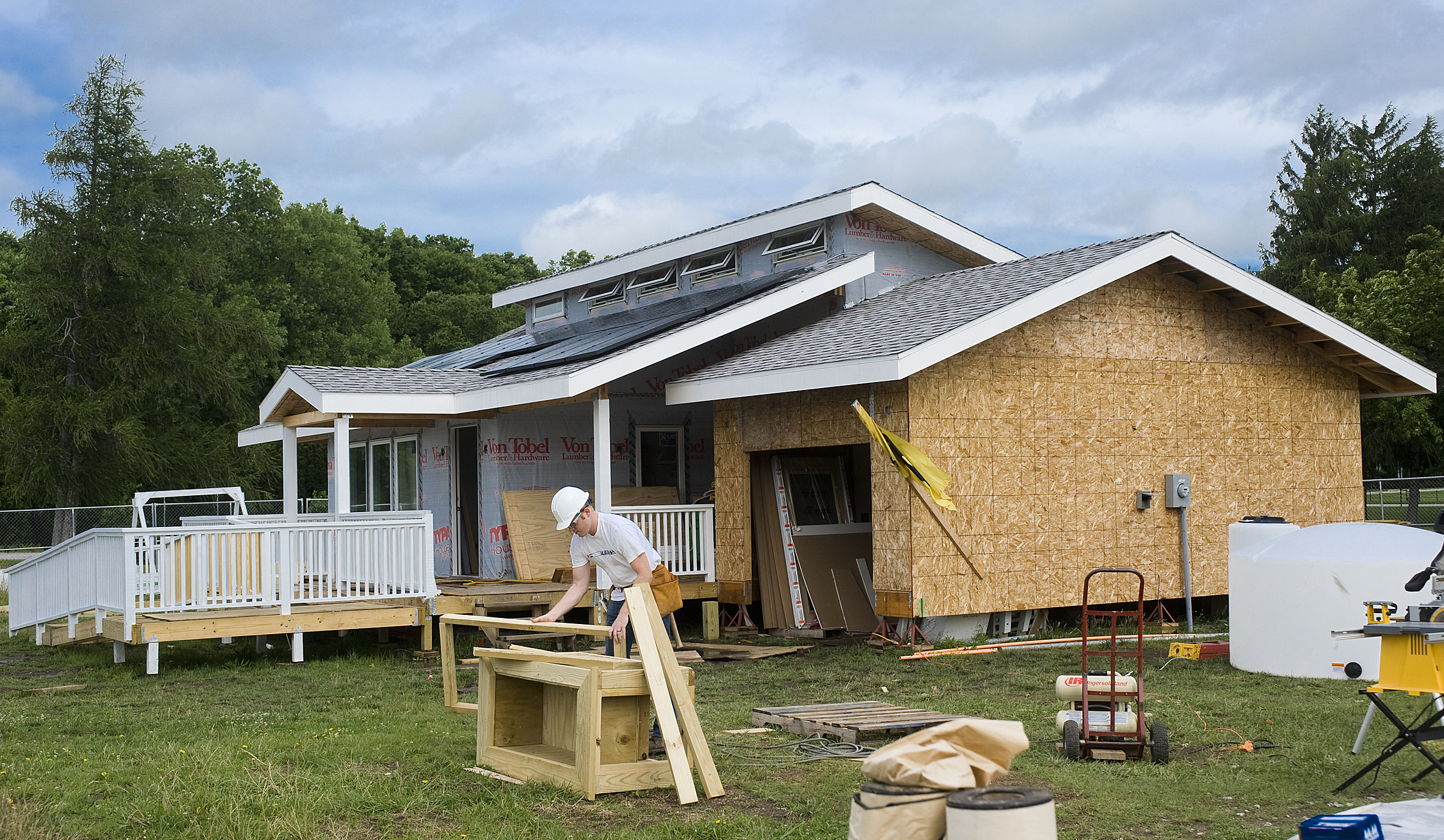 Matthew Hebdon, a civil engineering graduate research assistant, cuts lumber for the Purdue solar home, which is being built on McCormick Road. An open house will be Saturday (July 2). This fall the home will be entered in an international competition in Washington, D.C. (Purdue University photo/Mark Simons)

WEST LAFAYETTE, Ind. – Purdue University will throw an open house at INhome, the solar home that will compete in an international competition this fall.

The free INhome Independence tour will be from 4-8 p.m. Saturday (July 2). The house has been constructed along McCormick Road just north of Purdue West shopping center.

Purdue was one of 20 universities chosen in April 2010 to compete in the U.S. Department of Energy Solar Decathlon 2011. The teams, including four from outside the United States, are designing, building and operating affordable, attractive and energy-efficient solar-powered homes.  The houses will be set up on the National Mall's West Potomac Park in Washington, D.C., Sept. 23 through Oct. 2.

But first, the Purdue team has been building INhome, short for Indiana Home, on campus since April. The week after the open house, team members will dismantle the house. The next week, they'll reassemble it to work out the kinks before they again dismantle it in September, truck it to Washington and reassemble it yet again.

"We haven't run into many surprises yet," said Kevin Rodgers, a graduate research assistant in the College of Technology and the project manager. "But the surprises are likely to come when we actually put it on a truck for Washington."

"A house like that isn't necessarily appealing," he said. "We've designed a more traditional, Midwestern-style home. It may be more difficult to transport, but it's definitely appealing."

McKenna Regan, a Krannert School of Management student who is handling marketing and communications for the project, said INhome feels like a home. "It shows that you don't have to give up comfort to live sustainably."

Work on INhome began in fall 2009. It has involved more than 200 students from six colleges and schools: Technology, Engineering, Liberal Arts, Agriculture, Krannert, and Health and Human Sciences.

While technology and engineering students have taken the lead on design and construction, agriculture students are doing the landscaping. Students from liberal arts are in charge of interior and graphic design. And students in hotel and tourism management in health and human sciences have designed menus for two dinner parties that must be hosted at the house during the 10 days in Washington.

According to DOE competition rules, the house must be net-zero for energy consumption, which means it must produce at least as much energy as it uses. A team will be penalized if a house appraises for more than $250,000. The house also must not be more than 1,000 square feet, not including the garage. Rodgers said Purdue's two-bedroom, one-bath house is 984 square feet. It features an open-plan kitchen-living-dining area and has a utility room.

DOE provides $100,000 to each team. But the costs, including construction, moving the house to Washington and back, and housing the team in Washington, are expected to approach $700,000. A fundraising campaign continues. Donations may be made through the INhome website at https://www.purdue.edu/inhome

The website also has information on Purdue's team, house and sponsors, including platinum sponsor Ingersoll Rand.

More information on Solar Decathlon 2011 is available at https://www.solardecathlon.gov