Purdue, Neil Armstrong present 'Hero of the Hudson' with medal 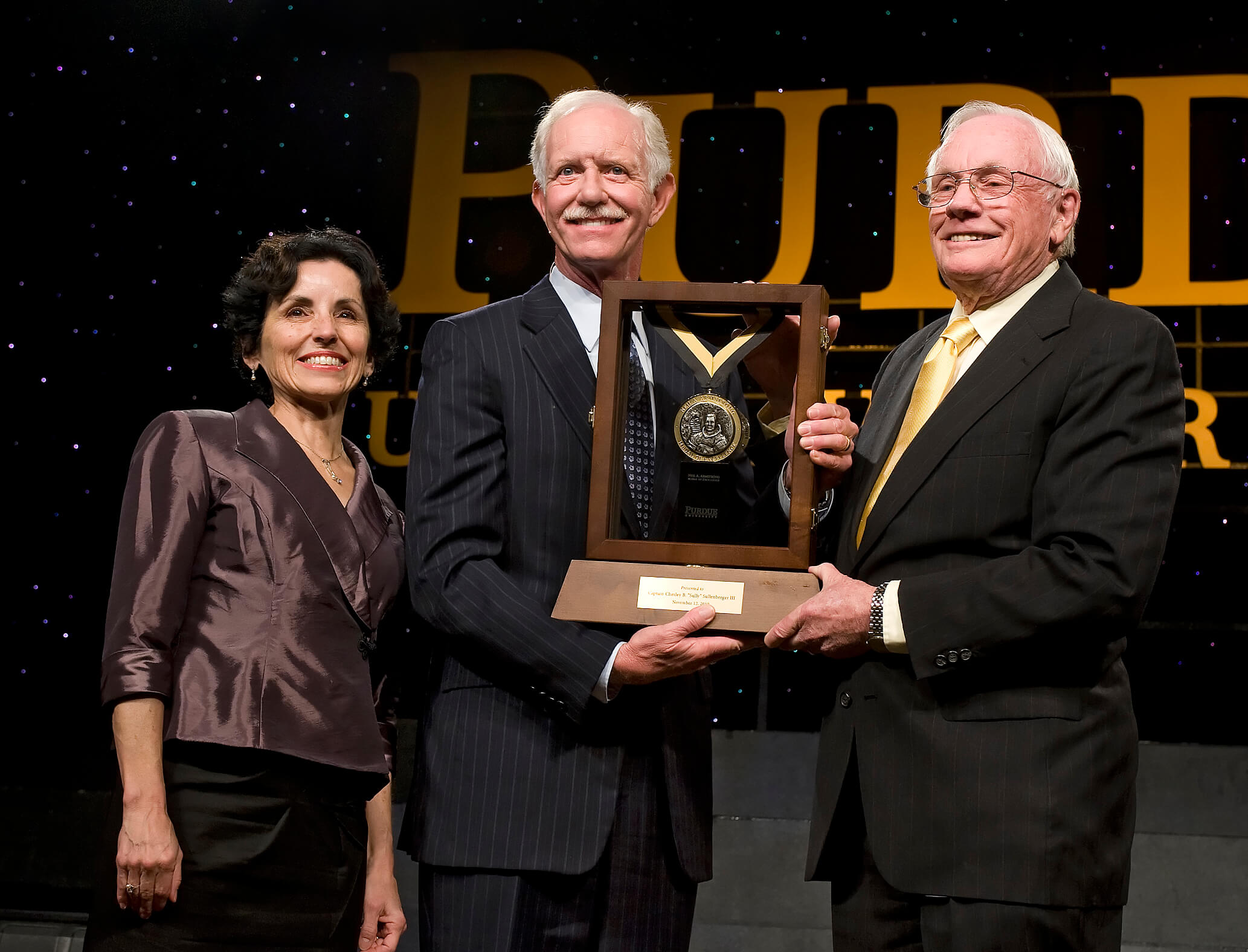 Purdue President France A. Córdova, from left, Capt. Chesley "Sully" Sullenberger and Neil Armstrong took part in a Friday (Nov. 12) event in which Armstrong presented Sullenberger with the university's Neil Armstrong Medal of Excellence. The honor is to recognize those who have "embodied the same pioneer spirit, determination and dedication that distinguished Neil Armstrong's exploration of space and his later roles as a businessman and scholar." (Purdue University photo/Mark Simons)

WEST LAFAYETTE, Ind. - Purdue alumnus Capt. Chesley "Sully" Sullenberger, the Hero of the Hudson, was awarded the university's Neil Armstrong Medal of Excellence on Friday (Nov. 12), making him only the second person to earn the honor.

Armstrong, a former astronaut and Purdue alumnus, returned to present the medal at a dinner that was part of his alma mater's annual President's Council Weekend. The Neil Armstrong Medal of Excellence recognizes individuals who have embodied the same pioneer spirit, determination and dedication that distinguished Neil Armstrong's exploration of space and his later roles as a businessman and scholar.

"We are honored to present this medal to Sully Sullenberger, whose skill, composure and courage in the face of a singular challenge saved the lives of everyone aboard that US Airways Airbus," said Purdue President France A. Córdova. "The poise and dignity he displayed in receiving the international acclaim that has followed set him apart as a true American hero."

The Armstrong Medal is given at the discretion of the Purdue Board of Trustees. The final recommendations are subject to review and approval by Armstrong prior to being submitted to the president.

Just after takeoff from LaGuardia Airport on Jan. 15, 2009, a flock of geese took out both engines on his US Airways airliner. Sullenberger told his passengers to brace for a hard landing   and then set the plane down safely on the Hudson River. With the Manhattan skyline as a backdrop, he stayed on board until all 155 passengers and crew were safely off the plane.

A native of rural Texas who learned to fly as a teenager, Sullenberger received his undergraduate degree from the U.S. Air Force Academy in June 1973. Within weeks he was at Purdue taking summer classes to complete his master's degree work.

Earlier on Friday, at a Back to Class lunch for the President's Council, Sullenberger received a Distinguished Alumnus Award from the College of Liberal Arts, where he earned his master's degree in industrial psychology in 1973.

In his recent book, "Highest Duty: My Search for What Really Matters," Sullenberger said that his study at Purdue prepared him well for the challenges he would face.

He says industrial psychology (human factors) is "a discipline focused on designing machines that take into account human abilities as well as human limitations. How do humans act and react? What can humans do and what can't they do? How should machines be designed so people can use them more effectively?

"At Purdue, I studied how machines and systems should be designed. How do engineers create cockpit configurations and instrument-panel layouts taking into account where pilots might place their hands or where eyes might focus, or what items might be a distraction? I believed learning these things could have applications for me down the road, and I was right.

"In my later years, as I focused on airline safety issues, I realized how much my formal education allowed me to view the world in ways that helped me set priorities, so I understood the why as well as the how." 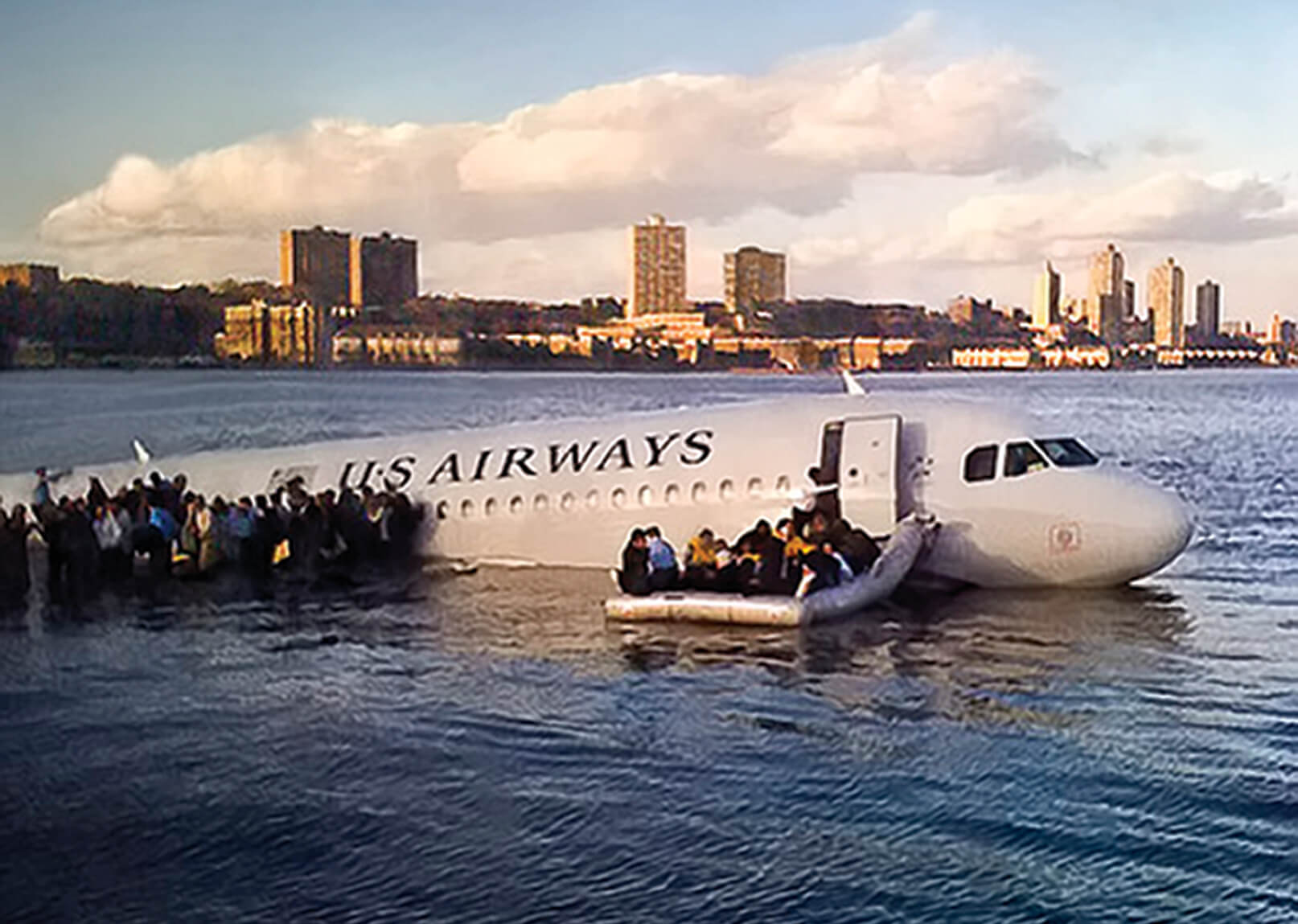 Airline passengers leave a US Airways Airbus 320 jetliner that safely ditched in the frigid waters of the Hudson River in New York on Jan. 15, 2009, after a flock of birds knocked out both its engines. (Associated Press photo/Janis Krums)

Sullenberger has retired from US Airways.

Armstrong received a bachelor's degree from Purdue in aeronautical engineering in 1955 and was awarded an honorary doctorate in engineering from Purdue in 1970. On July 20, 1969, Armstrong became the first person to walk on the moon as commander of Apollo 11.