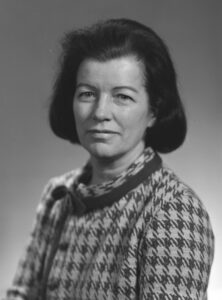 Helen R. Snyder Johnson decided from age six, when she broke her leg and had to have surgery that prompted a stay in the hospital, she wanted to be a nurse. Today, students become nurses at Purdue University because Johnson never changed her mind. Her belief in nursing coursed in her blood, and she built the institution’s nursing program from a mere idea.

Johnson was born in 1914 and grew up in the small town of Fritchton, near Vincennes, Indiana. She obtained her nursing degree from Indiana University and became a head nurse at the Indiana University Medical Center, where she also taught.

Throughout World War II, Johnson served as director of the Indianapolis Chapter of the American Red Cross of Volunteer Nurses Aids. She was chief of nursing for Richard Roudebush Regional Veterans Administration Medical Center and then became an assistant professor of nursing at Indiana University’s Indianapolis campus. Twice she was president of the state nurses’ organization.

In the 1950s, there was a dire need for nurses in Indiana, leading to a demand for more university nursing programs. While on Purdue’s campus for her son’s college orientation in 1962, Johnson investigated the rumor that Purdue wanted to start a nursing program. Her impressive résumé, savvy leadership style and energetic spirit impressed Charles Lawshe, dean of university extension, who hired her almost on the spot.

Over the next 20 years, she was the force behind the development and growth of nursing education. Johnson saw the school through its infancy and growing pains, and its success today in the College of Health and Human Sciences is testimony to her steely determination and foresight.

Johnson came to Purdue as the sole nursing faculty member in the Department of Technology. In one year, Johnson obtained funding, hired faculty, arranged clinical experiences in hospitals and other local healthcare agencies, developed a curriculum and secured state approval.

Johnson obtained a W.K. Kellogg Foundation grant to provide educational instruction for new faculty members, many of whom had never taught in an associate degree program. According to Purdue University’s First Annual Report to the W. K. Kellogg Foundation, Johnson visited the Purdue Speech and Hearing Clinic and the Purdue Nursery School in the Department of Child Development and Family Life with the goal to integrate these resources in teaching patient care and offer meaningful clinical experiences for students.

Johnson kept her unwavering eye on the prize and the nursing program was a success. She attracted first-class faculty, and students enjoyed the advantages of a large university’s cultural and social opportunities.

For her accomplishment in creating the nursing program at lightning speed at Purdue University and her dedicated service to the nursing profession and the health of Indiana citizens, Johnson received the highest honor bestowed by the governor of Indiana, the Sagamore of the Wabash, in 1963.

In 1975, at the age of sixty, she earned her doctorate in higher education administration from Indiana University. She wrote her thesis on the history of Purdue’s nursing education programs, expressing that she wanted Purdue to be a leader in nursing education.

Johnson never stopped striving for the next leap. The Nursing and Allied Health Sciences Building (today named the Helen R. Johnson Hall of Nursing) was Johnson’s crowning achievement. Johnson helped design and plan the nursing building to ensure it had the latest offerings for nursing students.

The building was dedicated on October 2, 1977. That year, Johnson was awarded Purdue’s Helen Schleman Gold Medallion for extraordinary service to Purdue, particularly in the promotion and advancement of women students and women’s issues.

‘A challenge like no other’: Nursing alumna remembers COVID-19 vaccination work
Purdue Nursing researcher striving for better protection of the elderly nationwide, during and post-pandemic
HHS Parkinson disease research extends to patients and their families