Day 3 into our trip. For the past couple days, it has been almost unbearably hot in New York, so I decided today would be a good day to dress lightly. I would realize my mistake several times throughout the day, as it was wet and rainy for the majority of the time we spent outside.

The rain caused a change in itinerary for today’s adventure. We were supposed to start the day with a tour through the Village, but instead we visited the Museum of Jewish Heritage, which had recently become host to an exhibit called Nazi Persecution of Homosexuals 1933-1945. The exhibit focused on Paragraph 175, which detailed situations in which participating in homosexual activity could be punishable by law. One thing that really struck me about this exhibit was the Nazi propaganda that was used to advertise brotherhood and loyalty between German “Aryan” men – to me, it seemed like the many depictions of buff, handsome men holding hands and smiling would actually be appealing to a gay male audience. 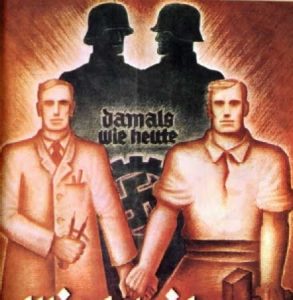 As a classical studies major, I was also interested in the financial incentives and awards that would be given out to women for having many strong, “Aryan” children. There was a picture of a woman receiving a gold Mother’s Cross for bearing eight strapping young lads. In Augustan Rome, the Caesar would increase taxes on unmarried men and women and would give rewards to women who have more children in order to increase the citizen population. I believe that my generation was raised to think of fascism as something undesirable and scary without really understanding it, but this connection helped me realize more clearly what fascism is and its relation to ancient history.

Unfortunately, the Museum of Jewish Heritage would not allow any photography of the inside of the building (all the previous pictures were found through Google). However, they did allow me to take this picture of the distant Statue of Liberty through the rainy window. 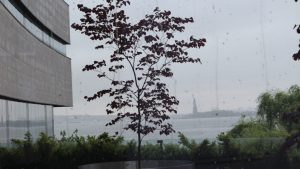 We then traveled to Stonewall Inn to meet with Tree Sequoia, a veteran of the Stonewall Uprising on June 28, 1969, which is considered by many to be one of the incendiary events for the gay liberation movement and the fight for LGBTQ rights in America. As we neared the building, we passed through Christopher Park to view the Stonewall Inn memorial. 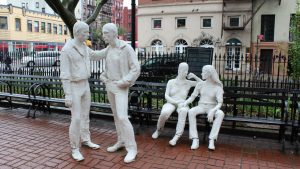 Myself and another student had presented on the Stonewall Uprising and its effects earlier that morning, but nothing we read or watched had been able to tell me what it was like to be one of the protesters during the riots. Tree was very informative and enjoyed sharing his knowledge with our class, welcoming any and all questions we posed. Our visit was short because of time constraints but it was very interesting and exciting to be able to sit inside such a historic place (the bar is still in business, so I will definitely return when I can legally drink alcohol in the US). 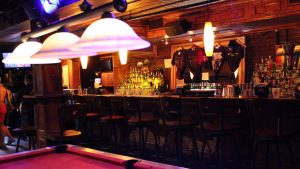 After visiting with Tree, we were free to have lunch (finally!). I had my first New York slice and several of us got dessert at the Big Gay Ice Cream Shop. 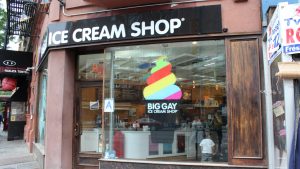 After our short lunch, we walked to The Center, the New York City LGBT community center, where we met with Jim Eigo of ACT UP NY to discuss activism and the history of ACT UP (AIDS Coalition To Unleash Power). We were joined later by Brandon Cuicchi, current member of ACT UP NY, and Brent Nicholson Earle, founder of A.R.E.A., the American Run for the End of AIDS, Inc. Brandon spent his time engaging us in learning the basics of activism, while Brent told the long-winded but very entertaining story of his twenty month run around the periphery of the United States. (Pictured below, Jim Eigo on left and Brent Nicholson Earle on right.) 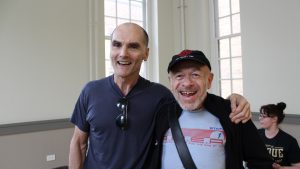 After a delicious dinner at Empire Szechuan Village, we returned to The Center for an official ACT UP NY meeting. We spent three hours learning about important LGBT issues in the New York area and coming up with slogans to use for protesting the closing of the Chelsea clinic. I won’t go into much detail because ACT UP NY’s activities will be discussed further in a later blog post.

Until then… ACT UP! FIGHT BACK! END AIDS!