It’s been two days in New York City, but it still feels too much like a dream to be real. To be fair, traveling was much more stressful than I anticipated (flying was the easy part, but getting to the NYU dorms and checking in really drained my energy). I found myself grateful, for once, for the uncomfortable, anti-bedbug twin dorm mattresses, as I slept, excited to begin the hands-on learning.

In the morning, we met with Dr. Jonathan Katz, who promised us an illuminating tour of the MET and the Leslie Lohman Museum. 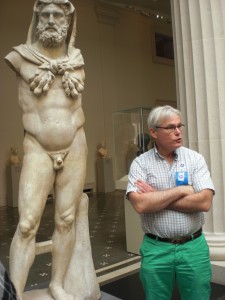 Beginning with the art of Greek and Roman antiquity, Katz emphasized that what seems like one thing to us may actually be something entirely different. Social attitudes are heavily influenced by culture and time period. For instance, the practice of pederasty may be labeled as homosexual activity today, but in reality, there was no difference for an Athenian man to have a sexual relationship with a woman, a boy, a slave, or a prostitute.

This being said, it is still incredibly infuriating for the museums (which are funded by wealthy, upper-class patrons) to ignore the issue entirely. The following drinking cup, attributed to Douris ca. 470 B.C.E., was captioned by the MET as “it is difficult, and perhaps unnecessary, to characterize the situation precisely.” The political tone of such a piece emphasizes the fear that people in power have of marginalized groups. Even today, women with free agency, especially when engaging romantically with one another, are dangerous, political criminals worthy of erasure. 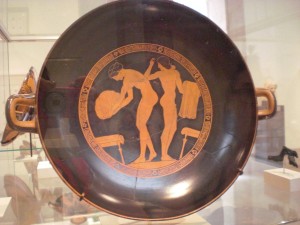 Moving on to modernist art, Katz emphasized that, above all else, art is not a window into reality, instead, art is a construction. The artists that we focused on were ones who refused to cater to the dominant culture of the time (or if they did, it was only for survival). Some artists, like Edgar Degas, depicted everyday femininity, refusing to submit to the traditional nude (created for the wealthy, male gaze). Ultimately, it is important to note that the church often payed the bills for artists. Resistance and eroticism had to be depicted so that it could survive the church.

The MET had its modern art section closed, so instead of touring the Leslie Lohman Museum, we went to the MOMA after lunch. I had a bagel, and needless to say, it was delicious. 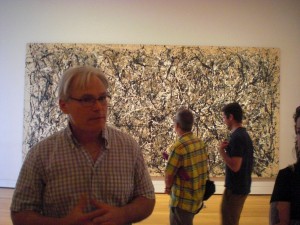 Modern art is meant to be expressive, but deliberately so. Katz spoke of the painstaking detail that went into even Jackson Pollock’s work. This brings up an interesting point, however: male modern artists began working with manly tools, and their expressiveness allowed them even more connections within the art world. Women, on the other hand, are seen as naturally expressive; a woman using her expressiveness as a career meant that she was unintelligent. It is indescribably infuriating to know that the same thing men were praised for in the art world, women were despised for. 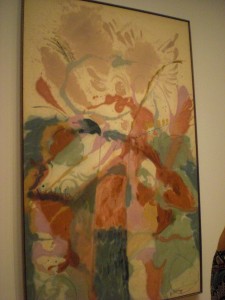 Some modern female artists took art off the walls and onto the floor. These women melted traditional art down to its components, which allows for numerous interpretations of female frustration; women’s work is on the floor, lower than men’s work.

The day ended by talking about Andy Warhol. Katz described him as sophistically un-schooled, and refusing to acknowledge the distinction between fine art and commercial art. Before today, I had never questioned the significance of Campbell’s soup: they all have similar labels from the same company, but are all fundamentally different. Katz also, funnily enough, pointed out the camp that Warhol infused into his Campbell’s soup art. Warhol was also very interested in the distinction between the social and the private: he only depicted Marilyn Monroe, Jackie Kennedy, and Elvis Presley after they suffered public scrutiny. Katz emphasized that the distinction between public persona and private life is something that queer people know all too well, something that is necessary for survival. 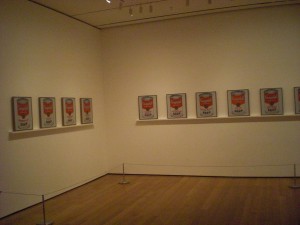