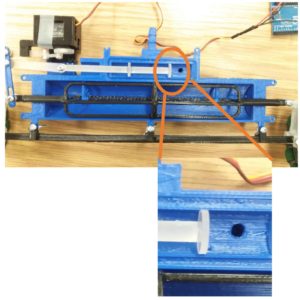 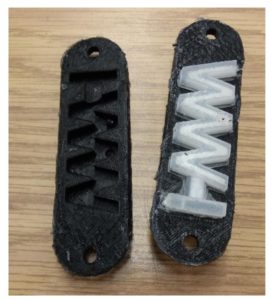 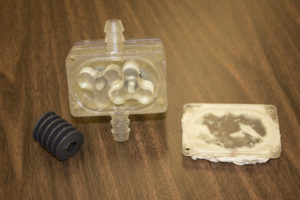 High- resolution 3-D printing (photo-cured polymers) are used for producing various functional plastic components that can be disassembled and reassembled for the practical demonstrations. The components are made transparent so that the students using the components in a kit can observe the movement of the working fluid. Selected prototypes have been designed, built and tested. Various components have been built, this includes, gear type pumps, poppet and spool style valves, and flexible actuators. 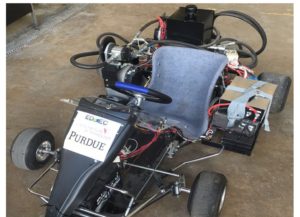 Electrification of on-highway and off-highway vehicles is increasing but it is still slow. A key reason is the reduced energy density in electric batteries and the technical difficulty to produce a powerful battery pack has delayed wider adoption of these kinds of vehicles. A vehicle’s capability to recover energy is influenced by the size of the battery pack and the rate at which energy can be converted from kinetic to chemical form. Large currents can dangerously damage cells in the battery and reduce their lifetime. Most off-road applications currently use some form of an internal combustion engine, which in many cases contributes to the environmental issues through tail pipe emissions. Typically, hydraulic and electric power trains have been mutually exclusive. Combining the advantages of the two storage devices will lead to an ideal solution for energy management and performance of the system. Our research team’s most recent results used a computer simulation of an electric-hydraulic hybrid bus with three hybridization levels. The study evaluated the effect of the accumulator size on battery performance. It was found that utilization of a larger accumulator leads to a large energy storage capacity, but also an increase in the required volume for operating in various urban cycles as seen below. 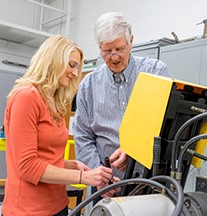 Machine systems are the drivers of manufacturing, industries, and everyday devices.  These system drive our economy, but can also be the source of safety issues.  No matter how complex, machine systems are composed of basic integral building components, including such items as hoses, seals, bearings, and couplers.  Each piece must function in order for the machine to operate safely and effectively.    In a world where the future will be more reliant upon robotics, machine learning, and autonomous devices, monitoring each component in a complex system becomes critical. The goal of this work is to create an integrated system that monitors numerous system components include items such as belts, seals, hoses, and numerous others to predict pending failure prior to its occurrence and the location of the pending event increasing safety and decreasing cost. 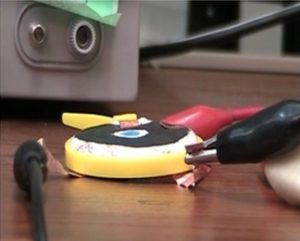 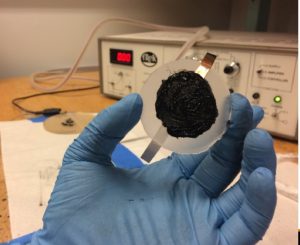 Electroactive polymers represent a class of materials capable of reallocating their shape in response to an electric field and can harvest energy in the form of electrical energy when the materials are mechanically deformed.  Electroactive polymers can be used to detect deflection, material changes, pressure changes, or torsional movements. Alternatively, electroactive polymers can also be utilized as energy harvesting devices by storing the energy from mechanical movements in electrical form.  These materials can also in turn, be used as actuators to respond to a sensed stimulus from a capacitive signal.  Therefore, applications of these materials have a broad range of uses, from components such as smart seals and hoses to micro-pumps, wearable sensors, energy harvesters, and artificial muscles.  The goal of this research is to develop a manufacturing process for production of flexible electroactive polymers to enable production of these commercial products.

Energy literacy is a critical topic in future business, industry, and global relations. As such, the next generation of engineers, scientists, technologists and policymakers must gain a technical understanding of these issues to advocate and innovate for solutions. Fundamentals of energy conversion are the keystones to student understanding across multiple sub-disciplines in engineering and engineering technology. Energy conversion is the common theme that links thermodynamics, fluid power, electricity, electromagnetism, hydraulics, mechanics, dynamics and numerous other engineering topics. The goal of this work is to horizontally and vertically integrate energy throughout the Mechanical Engineering Technology Curriculum. 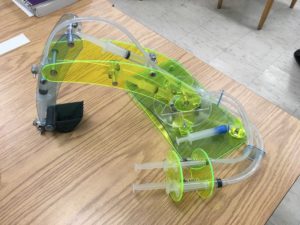 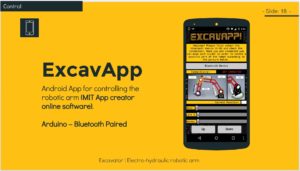 With the expansion of research and development of fluid power in many industries, it is important that the youth of the next generation be able to understand it’s applications. In order to do this, scientists and researchers must promote outreach to young students. Hence, the Electro-Hydraulic Excavator (EHE) was created to accomplish this goal and demonstrate the real-life application of fluid power. This paper describes, criticizes, and evaluates the design of the Electro-hydraulic Excavator’s (EHE) past iterations and, primarily, it’s current state.

The Internet of Things is a new trend in technology that is already changing the world in which we live by interconnecting physical objects that can collect or transmit information to us and to each other. This project showcases the use of the IoT by the development of a semi- autonomous utility vehicle using off-the-shelf home automation (smart) components. The system is composed of hardware and software elements that are integrated into a self-propelled scaled down version of an off-road vehicle, a lawn mower. A web application was built and enabled for Android devices to command and control the vehicle, various applets in the application were enabled to be triggered using the Alexa Voice Service and an Amazon Tap speaker. Ultrasonic sensors installed on the vehicle proved their reliability by stopping the vehicle at an average distance of 7.3 cm away from different obstacles. This work contributes to existing knowledge on the Internet of Things by providing a demonstration of a semi-autonomous vehicle capable of cloud-based control both with voice commands and through a web app.

A hydro-mechanical transmission coupled to an electric AC motor and DC generator was built to simulate a wind power turbine drive train. The goal of this project was to demonstrate and simulate the ability of a hydrostatic variable ratio system to produce constant electric power at varying wind speeds. Experimental results show that the system can maintain a constant voltage when a 40% variation in input speed is produced. An accompanying computer simulation of the system was built and experimentally validated showing a discrete error no larger than 12%. Both the simulation and the experimental results show that the electrical power output can be regulated further if an energy storage device is used to absorb voltage spikes produced by abrupt changes in wind speed or wind direction.

Application of Switching Valves to Improve Reliability of Hydraulic Systems

Electro-Hydraulic Servo Valves are very sensitive to contamination, because the radial clearance between the spool and the sleeve in these valves is in the order of 5 μm or 0.2 thousands of an inch. This tight gap tends to break the hydraulic fluid and form sticky films increasing viscous friction and eventually creating spool stiction. Although these failure modes are not necessarily catastrophic, they do affect the hydraulic system performance, causing instability, loss of control and inefficiency. There is a need for a valve alternative that is resistant to particulate contaminants present in the fluid. Because tight clearance between the spool and the sleeve is required to avoid cross-port leakage, the best alternative is to design a valve that does not use a linear spool and sleeve configuration. My approach consists of replacing the Electro Hydraulic Servo Valve by a set of controlled, fast switching valves to adjust the motion and position of an actuator, as in for example: a metering valve in a gas turbine engine.