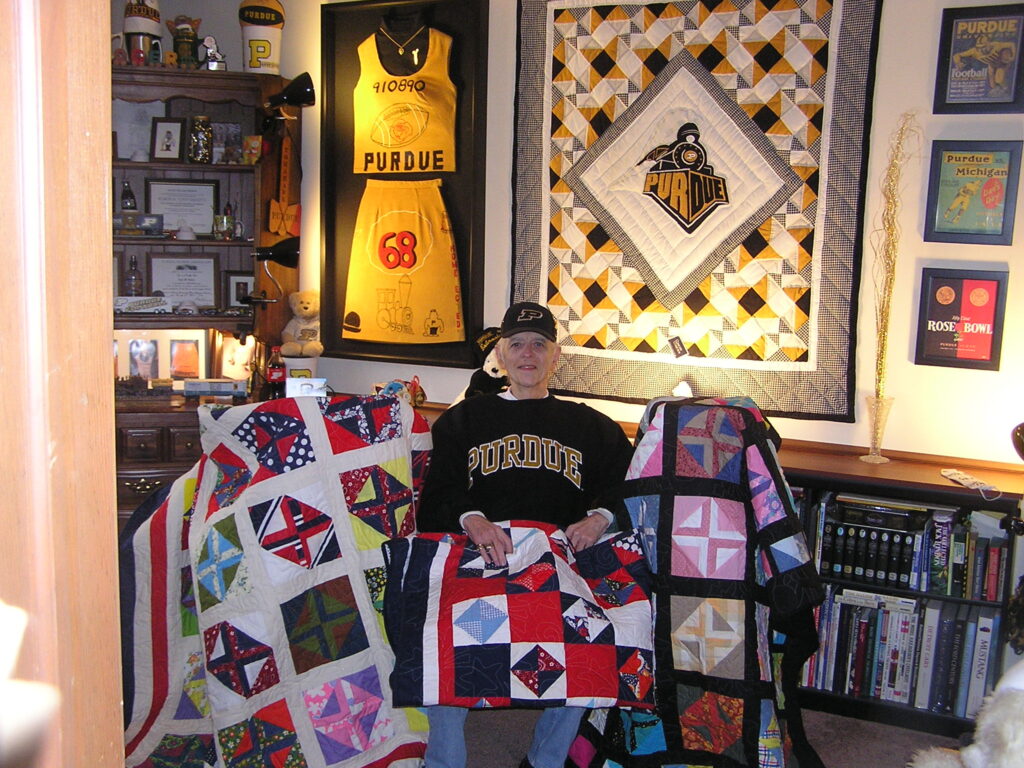 Roger Johnson sits in his home’s Purdue room with three of the quilts he made in memory of his wife, Vicki.

A few months after the passing of his wife of more than 50 years, Roger Johnson started cleaning things out in their home. As he was going through a large, blue plastic tub Vicki had stored in their basement, he found an array of fabric: a mostly completed quilt top, several quilt blocks in various stages, and a stack of fabric that was cut into the components to create a quilt block that Vicki had likely designed.

With coaching from Kathy Mikros, the organizer of The Farmington Piecemakers quilting guild in Michigan, Roger started working to finish these quilting projects, producing several quilt tops and even expanding into other sewing projects.

“I blame my wife for all of it because if she hadn’t been a home ec major and high school sewing teacher, teaching basic sewing and tailoring, I probably never would have gotten into it,” Roger said with a chuckle. 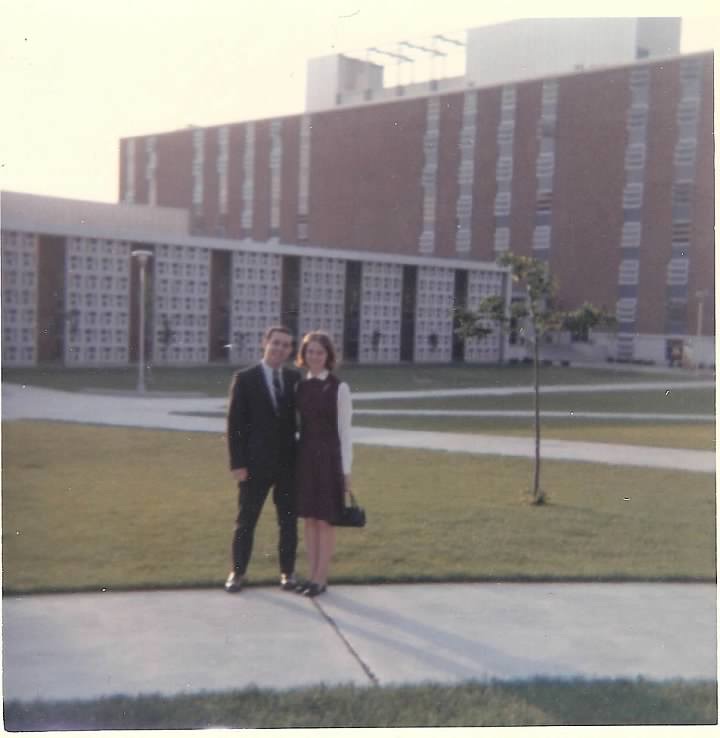 Roger and Vicki stand outside of Earhart Hall in 1968. The two met at a Harrison Hall–Earhart Hall social gathering and were married in August 1968.

A Purdue University College of Health and Human Sciences alumna, Vicki graduated in 1968 with a degree in home economics education. It was during her time at Purdue that she met Roger, an industrial management major in the Krannert School of Management, at a social gathering between Harrison Hall and Earhart Hall. At the time, Roger was a floor counselor in Harrison Hall, and Vicki was Earhart Hall governor. The two were married in August 1968 after they graduated from Purdue.

Both loyal Purdue alumni, Vicki and Roger supported the Home Economics Class of 1968 Freshmen Scholarship for several years alongside others from Vicki’s class.  Roger continues to help fund the scholarship in Vicki’s memory. 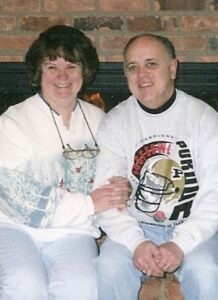 Roger and Vicki pose for a photo together
before the 2001 Purdue Rose Bowl football game.

Roger said much of his experience with sewing came from helping Vicki throughout the years, such as cutting patterns when she needed a project done quickly or helping her hold the fabric as she made sure the grain was running straight . His biggest project in those days, he said, was a backpack for his young son when he was in pre-school, which Vicki guided him through. He also helped Vicki make a blue jean quilt for his daughter when she was in college.

Roger was first introduced to the quilting guild when he and Vicki brought a set of quilt blocks there that his mother had started back in the 1930s to find out what they could do with them. The set was designed to make a grandmother’s flower garden quilt, a complicated quilt design made using hexagons. Since Mikros, the leader of the guild, believed it required hand-quilting, Roger sent the project to artisans in Minnesota, where it took 18 months to complete. He then gave the quilt to his daughter.

Roger also recognized the mostly completed quilt top from the basement as one his father-in-law had created. He brought the quilt to the quilting guild organizer who added a border, batting, backing and binding. He gave this quilt to his son.

From there, Roger tackled the quilt blocks that Vicki had worked on. With some help from his daughter and the guild leader, he took the pattern that Vicki had started, and he completed a quilt top, which led to another, and so on. Roger said he completed five quilt tops from Vicki’s quilt blocks and material stash, having the leader of the quilting guild finish them by adding batting, backing and binding with designed stitching on a long arm quilting machine.

“I just kept putting them together and kept charging ahead,” Roger said. 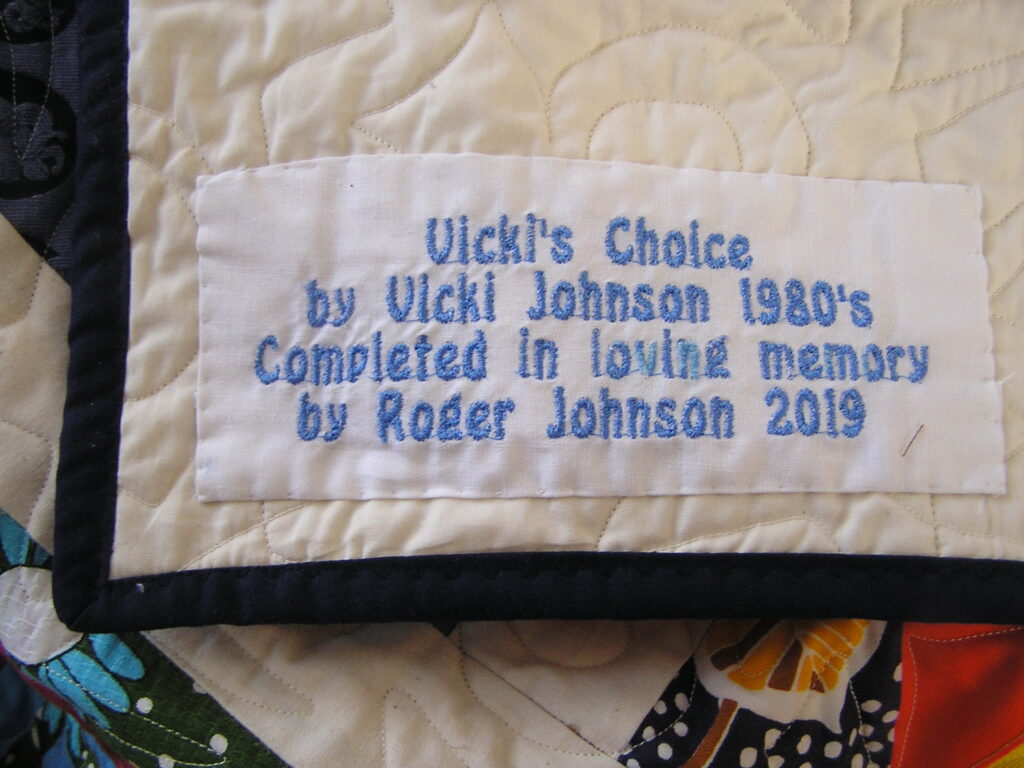 Roger named the quilt design Vicki created “Vicki’s Choice” and affixed labels on each quilt with the hope that they can be appreciated for generations.

Many quilt patterns have design names. When Roger asked what the design name was for the first quilt he had finished of Vicki’s, those he asked did not recognize it. With a little research, he found that many quilt blocks were named after the person who designed them, followed by the word “choice.” So, he named the quilt pattern “Vicki’s Choice,” with a label on the back that reads: ”Vicki’s Choice, By Vicki Johnson 1980’s, Completed in Loving Memory, By Roger Johnson 2019”

Roger said he hopes these quilts can be appreciated generations down the road.

When the pandemic descended in early 2020, Roger stumbled across a TV show that was offering tips on how to make face masks. He noticed the process wasn’t that different from the quilt blocks he had been making, so he started sewing masks to fill his time at home.

He made a Michigan State University mask for his daughter; University of Michigan masks for his son and daughter-in-law; and for himself, he made a Purdue mask. From there, he continued his efforts making masks from printed material and denim for his son-in-law, grandchildren, family friends, his doctor and the nursing staff, and more, making approximately 70 masks total.

He branched out further as the women in the quilting guild took him under their wings to include him in their projects and monthly meetings. For the guild’s Christmas projects, he has made approximately 125 wrist straps to give to Meals on Wheels crews as well as a few mug rugs for the organization and some friends. He has even made one quilt on his own from start to finish.

While Roger says he does not know how long he’ll continue with quilting in the future or what he’ll do with the quilts he has made, he said his goal was to use the material Vicki had at home. He said he wanted to do something in her memory and to finish something she had started.

“I think she would be pleased that I took the initiative to keep that going for her,” Roger said. “I don’t know for sure, but I hope she would have.”