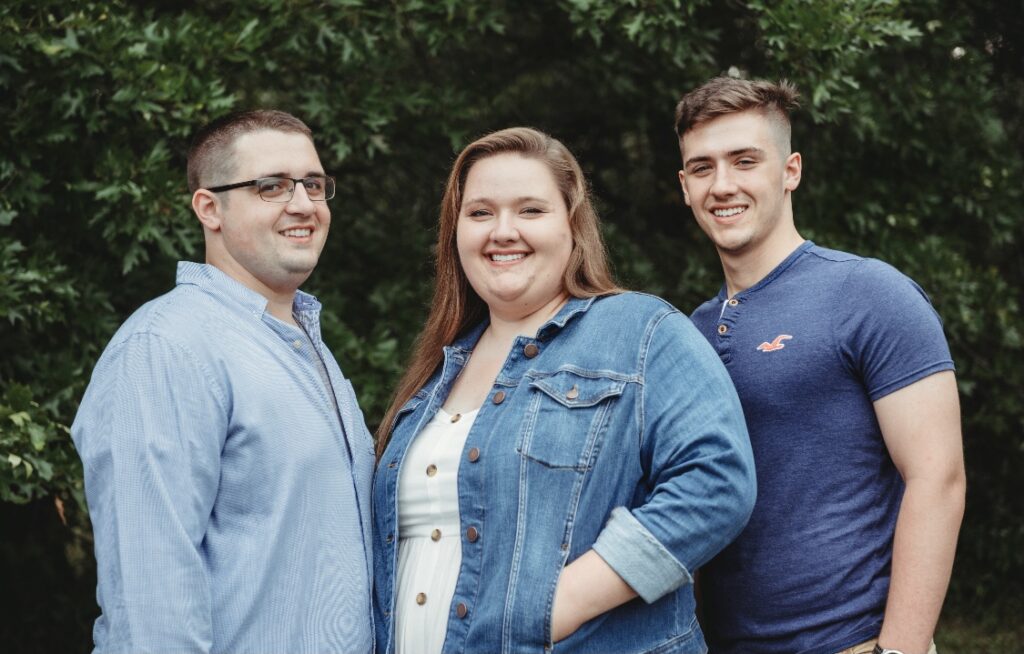 In Indiana and the United States, there is a tre­mendous need for highly skilled nurses. The Bureau of Labor Statistics predicts the U.S. workforce of registered nurses will need to grow 7% in the next decade, yet enroll­ment in nursing programs is not growing fast enough to meet the projected demand. By 2030, Indiana alone will need 75,300 regis­tered nurses. Three siblings, all Boilermakers, are doing their part to answer the call.

Siblings Branton, Victoria and Brayson Leazenby share the same education goal: to pursue a bachelor’s degree in nursing at Purdue University. Branton graduated in 2019 and is now at Indiana University Health Methodist Hospital in Indianapolis, working as a registered nurse in the cardiovascular critical care unit. Victoria is a senior, graduating in May 2021, and Brayson is a sophomore, graduating in 2023.

Their mom, Tresa Hammond, is a Purdue College of Education alumna.

“I knew they would all go to Purdue because we went to so many games and other Purdue activities when they were growing up,” Hammond said. “They all three have such different personalities but all have a servant’s heart. I knew they would pick a major that would reflect service to others.”

The draw to nursing

Branton had surgery in sixth grade and was interested in anesthesia ever since. When it came time for school, he had two choices: nursing school or medical school. He decided to become a nurse and later follow the path to become a certified registered nurse anesthetist (CRNA). This way, if he decides anesthesiology is not for him, there are a variety of other options as a nurse, whereas in medical school, he would have to choose a focus quickly.

Growing up, Victoria had a plethora of life experiences with healthcare providers and found the idea of medicine and healthcare fascinating. Nurses had an impact on her, making her feel cared for and comfortable. She knew she wanted to enter a profession where she could influence people in their most vulnerable times. In high school, she was enrolled in a Health Careers class that gave her the opportunity to shadow several units in a healthcare setting. This experience solidified that she wanted to pursue nursing. The pandemic has made it even more real how much she is called to care.

Brayson has had a fascination with the heart since he was young — he thought he wanted to be a cardiologist when he grew up. As he got older, he realized medical school was not for him but he still wanted to pursue an occupation in medicine. Watching and hearing from his older siblings in nursing intrigued him, so he decided to pursue it also.

A bond beyond DNA

Not only do these siblings share DNA, they also share the same courses, professors and persistent determination that comes with Purdue’s nursing program. Victoria and Brayson have looked to Branton as their role model since he went through the program first.

“He has been a huge encouragement and cheerleader at all times,” Victoria recalled. “We thought it was really cool when Purdue was named No. 1 nursing school in Indiana, according to Niche. We are proud that we all experienced/are experiencing the rigor and intensity of Purdue nursing.”

Even though they share their experiences in the program, their favorite classes show that they are different individuals. Branton’s favorite courses were in pharmacology and anatomy and physiology. He thought each clinical was fascinating because he experienced many different sides of nursing. Victoria has enjoyed obstetrics, despite the challenging material. Brayson’s favorite so far is his first clinical on the fundamentals of nursing. He has enjoyed learning new skills, putting them into practice and building confidence.

“You’re always learning, but putting the skills into practice helps you retain the information better and allows for a better experience,” Brayson explained.

Nearly 70% of Purdue School of Nursing graduates remain in Indiana to care for CRNA fellow Hoosiers, their families and communities. Branton and Victoria are included in this statistic, and Brayson just might be, too. Branton is planning to return to school to become a CRNA as he will be applying to Marian University’s program this fall. Victoria plans to pursue graduate school in 3-5 years to become a family nurse practitioner (FNP), but after graduation in May, she is looking into emergency and trauma medicine, OB or sports medicine. Brayson has always been interested in cardiology but is keeping his options open. He is looking forward to next year when he will experience many hospital and clinical settings as a junior. As he gains experience, he will have a better grasp of what he wants to do.

Now that Branton can look back at nursing school, he had some tips to share for current and future students.