A satellite P is in orbit around the Earth. A gravitational attraction force Fgr from the Earth acts on the satellite, where:

with G being the universal gravitational constant. For the instant shown, the velocity vP of the satellite makes an angle of θ with respect to the position vector rP/O. 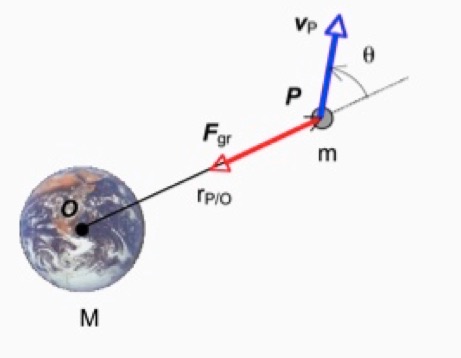 Kepler's 2nd Law
Kepler's second law states that the area swept out by the line connecting the satellite to the Earth's center over a given time Δt is a constant throughout the entire orbit of the satellite. See the animation below showing this swept area in blue (from Wikipedia).

In addition to the blue swept areas, the green velocity vector is shown along with the acceleration in terms of its tangential and normal components (rate of change of speed and centripetal components) being shown in purple.

Freeze-frames of the above animation at two instants in time are shown below. 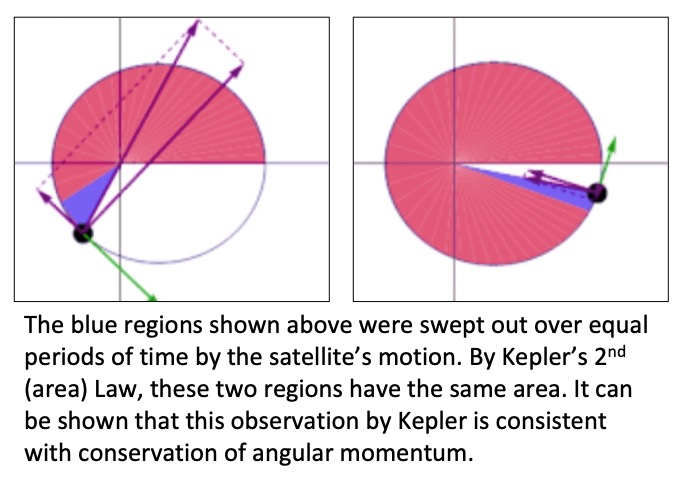 The consistency of Kepler's 2nd law with conservation of angular momentum is impressive considering that Kepler did this work in the early 1600's. This is compared with the time frame of Newton's work on his second law, the law of gravitational attraction and calculus from the late 1600's. Kepler was able to arrive at this second law without the benefit of Newtonian mechanics and differential calculus.