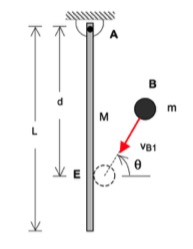 The animation below shows the impact of particle B with the bar.

Free-frame of motion immediately after impact. 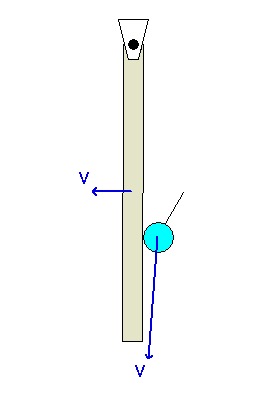 Using your FBD above, sum moments about point A . Consider the time of the impact to be short such that there is no change in position of either the bar or B during impact. Also, consider the particle to be of small physical dimensions.

What does your moment equation above say about the angular momentum of the system about point A?

Step 3: Kinematics
What kinematics do you need to solve this problem?

Step 4: Solve
From your equations in Steps 2 and 3, solve for the angular velocity of the bar immediately after impact. 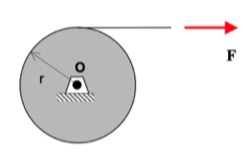 Step 2: Kinetics (Newton/Euler)
Based on your FBD above, write down the linear impulse momentum and angular impulse/momentum equations for the disk.

Step 3: Kinematics
What kinematics do you need here to solve?

Step 4: Solve
From your equations in Steps 2 and 3, solve for angular velocity of the disk at time 2 and the reactions at O. 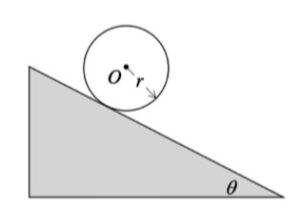 Step 1: FBDs
Draw a free body diagram (FBD) of the disk. In drawing your FBD, please note that the friction force is NOT proportional to the normal force N; that is, f ≠ μN. Why is that?

It is recommended that you choose a set of coordinates that are aligned with the ramp. For example, choose the x-direction down the incline and the y-direction   perpendicular to the ramp pointing up and to the right.

The above gives you a single equation in terms of two variables: vO and ωdisk.

Step 3: Kinematics
Note that the no-slip contact point of the disk with the incline is the instant center (IC) of the disk. Let's call that point C. Since C is the IC of the disk, you can readily relate the angular velocity of the disk to the velocity vector of the disk center O through:

Be careful with signs.

Step 4: Solve
From your equations in Steps 2 and 3, solve for the velocity of point O on the wheel at time 2.

Welcome to the ME 274 blog for the Summer 2022 term. The material on this blog is a complement to the lecture book for the course. Please review the resources that are available to you in the links on the left sidebar of the blog. Please use the discussion thread below to interact with your colleagues and friends in the course in learning the course material.

ALL material on the blog is visible and accessible to everyone without the need to log in to the blog. If you wish to add comments to the discussion threads here (and, we encourage you to do so), however, you need to log in first. To do so, use your Purdue Career Account login credentials, NOT the BoilerKey two-factor authentication.

On your FIRST login, you will be informed that you  need to be approved prior to being able to post. The people maintaining the blog will get you approved as quickly as possible; however, keep in mind that we are maintaining four course blogs for over 1400 students this semester, so it might take a short time for this approval. Once you are approved, you will be then be able to log in in the future without any delay. We appreciate your patience as we follow this security procedure that has been set up by ITaP for the Purdue WordPress blogs.

Ask and answer questions here. You learn both ways.

Ask and answer questions here. You learn both ways.

HINTS
The y-component of the position of P is not given to you explicitly as a function of time. Because of this, you will need to use the chain rule of differentiation in order to find the time derivative of y that is needed for the velocity of P:  dy/dt = (dy/dx)*(dx/dt). In this problem, as in others, do not confuse dy/dt with dy/dx.

DISCUSSION
Shown below is an animation created from the simulation of the motion prescribed for this problem. Some observations on this motion:

As we will see in the next class period when we work with the "path description" of kinematics, the velocity of a point is always tangent to the path of the point, and the acceleration always points "inward" on the path of the point. Do you see this in the animation below?