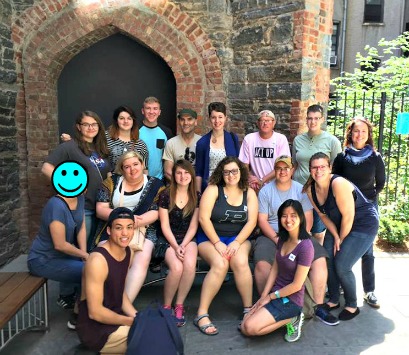 Early this morning, we set off toward Brooklyn to visit the highly esteemed and internationally recognized Lesbian Herstory Archives (LHA). Founded in 1974 by Joan Nestle, Deb Edel and other feminist lesbians, the Archives was a place to recognize the lesbian community and the relationships within that community. Now maintained by Deb and other volunteers, the LHA is home to thousands of collections, periodicals, and books, all pertaining to lesbians and the queer community.

As our group arrived in Brooklyn and approached the LHA, I was surprised to see that it was in the middle of a suburb, half a block from Prospect Park. Although I soon realized that the residential setting suited the LHA- the accessibility that it provided to all women, not just scholars, was a core tenet of the Herstory Archives.

Meeting Deb Edel and being invited into the Archives was a profound experience. To me, this was one of the biggest highlights of the trip. My exposure to lesbian and queer culture was painfully limited growing up in the Midwest. The Archives held in its shelves the proof that lesbians lived and loved across the nation, including the blue-collar communities of small Midwestern towns. I was amazed to learn about the thousands of women that had sent the Archives their stories: love letters, poetry collections, even periodicals shared within lesbian communities. The Archives maintains a real humanity in its work and I am incredibly grateful to all of the hours that Deb and others have put into it.

The Archive space is four stories: a basement and three floors. The basement is used for processing and storage. The first floor houses many books of many genres. Deb shared that the books are alphabetized by first name, in order to avoid the patriarchal alphabetizing by last name, which I thought was absolutely genius. The second floor houses the collections of material that have been sent to the archives from lesbians all across the world, and the many periodicals that the LHA also owns. The top floor is living space and not officially part of the LHA.

One could spend countless hours sifting through the Archives and discovering the intricacies of lesbian life. One could also discover one of the coolest feminist jean jackets in existence.

Dr. Pitts and Lowell gave us time to peruse, although we hardly knew where to start. After taking a group photo and saying goodbye to Deb, we had a free afternoon until we met up in the evening to watch a show on Broadway. Kinky Boots was my first live theater production ever. Although I needed some recap from Dr. Pitts on what was going on, I did enjoy the show- but I think my heart was left behind in the Archives.