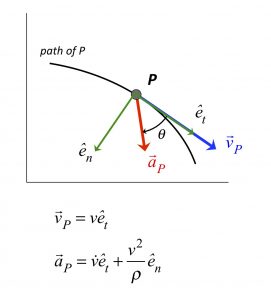 The path kinematics description has taught us the following things:

Shown below is an animation made from a simulation of an object moving along on a curvy path. The speed of the object goes through cycles of increasing and decreasing speed. The velocity and acceleration vectors for the object are shown in blue and red, respectively. Can you make the above observations on the motion shown below of this object?